McCann Is Unprofessional But Dundee Would Be Right To Call Foul Over A “Very Low” Hendry Bid. 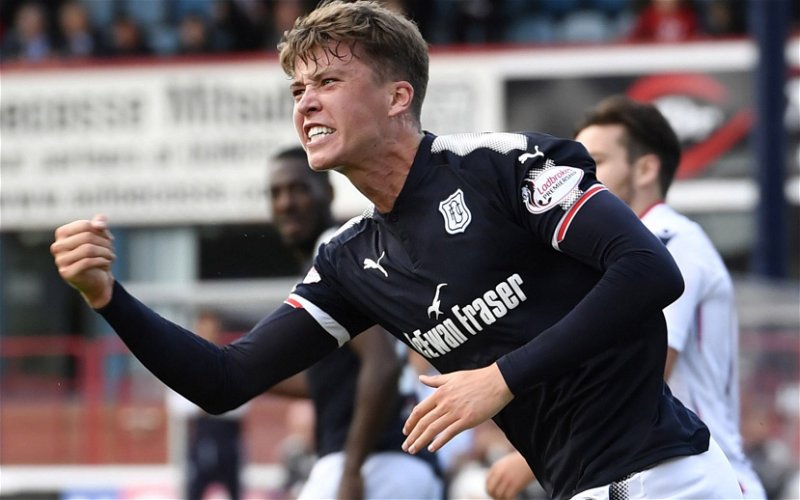 There’s a lot of social media criticism today of Neil McCann for breaking confidentiality and lashing out at Celtic for the bid we have allegedly submitted for Jack Hendry. This is providing that it was us he was talking about; nowhere in his published statements does he name our club, but he’s dropped some pretty big hints about it that there’s little doubt who he means.

It also depends on McCann telling the truth about a bid at all; I have already speculated that he might be using Celtic’s name to try and spark an auction.

Based on his comments today that has not been successful.

I understand why a lot of people are pissed at what he’s done here, because it is unprofessional, because unlike some people Celtic has not conducted its business via the media.

If we approached Dundee then by McCann’s own admission it was done in a manner that befits us. It was not litigated through the press. It has been done right.

But his description of the sum involved as “very low” is a sign that we’ve not got close to Dundee’s valuation of the player. Sevco has signed Greg Docherty, but they paid a higher price than they wanted to and they were forced to do that because Hamilton refused to be bullied.

Sevco’s conduct was so appalling that for a while the boy and his family weren’t even sure they wanted the move … this is the risk you take when you play games as they did.

We’re not playing games with Dundee, but if this is true we’re still we’re trying to get their player on the cheap. Their club would be mugs if they accepted a “very low” offer, and as angry as we are all entitled to be at McCann’s shocking attempt to embarrass us by laying out such things in public I understand exactly why Dundee might have approved of the way he’s handled it.

Because his central point was well made and right on the nose; if we’ve made an offer then by definition we’re saying this is a guy good enough to play for our club.

And since when is it justified in making a ridiculously low offer for someone we reckon is capable of wearing the Hoops? Dundee has named their price. It is not excessive; indeed it is generous when one considers the age of the player and the fact there is already English interest.

We have a reputation for doing things the right way, and in this case we have, as ever. We made an offer in private. That McCann has chosen to share it may well dissuade us from further interest in the player; he can blame his own manager for that if it proves to be the case. But if we do come back in for him then I trust we’ll have gotten real. I trust the offer will be one they cannot readily, easily, and publicly, dismiss.

If we rate this guy so low then Celtic fans will be quite right to ask what kind of judgement it shows that we ever tried to sign him in the first place. A signing in the low hundreds of thousands, from Dundee, to bolster a defence heading into a crucial European tie … that doesn’t inspire great confidence, to be frank.

If he’s being bought to plug that hole he’s worth at least the £1.5 million they are asking for. We can haggle some, we can propose some add-ons and enhancements, but the deal has to be one that reflects what it is we’re doing here. Anything less is an insult to the player and to Dundee itself. Pay what the man is worth, Celtic.

There are five days of the window left to go.