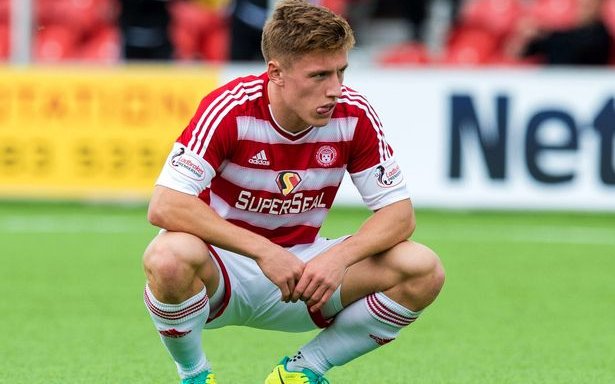 You can’t have failed to notice all the press chatter over Greg Docherty’s proposed move from Hamilton to Sevco, which was reignited last night after information “leaked” that the Ibrox club had upped their offer to “more than £500,000.”

As it happens, no such offer was made. But the word got out that it had been, and the intent is pretty clear. When the player is reading in the papers that Sevco has almost met his valuation, he’s supposed to run screaming to the club chairman and demanding to be let go.

The tactic is reprehensible.

But Sevco might have made a colossal misjudgement here.

Someone close to the action recently suggested to me that neither the player nor his family are completely sold on a move to the Ibrox basket case. The affinity they have for the club doesn’t even enter into their thinking. These are smart people, keeping their options open.

As a result, there will be no rush to the chairman’s door.

But that shouldn’t stop Hamilton protesting in the most vocal language about the way Sevco is behaving. One newspaper this morning pronounced the clubs “locked in talks” but confirmed rumours that there hasn’t been a second bid.

Do you think it was Hamilton who ran to the media and said one had been submitted? Do the math.

If there’s no offer on the table then much of the media is running a barefaced lie.

If someone at Ibrox fed them that lie, then it’s pretty obvious what’s going on.

Besides, as the media knows full well but seems determined not to report, the value of the offer is, itself, not the only consideration here. If Sevco offers £500,000 with nothing up front and payment terms staggered over the length of a five-year deal Hamilton are being royally grafted, and they know it.

Sevco might not even survive to pay the last instalment.

That club has done this too often, and other teams have to start taking it seriously and acting on it.

They were instrumental in trying to unsettle Jamie Walker at Hearts, several players at Motherwell, Kenny McLean at Aberdeen and now Jordan Jones at Kilmarnock and this kid Docherty. Until someone makes an official complaint this will go on and on.

Docherty signed a three year deal in the summer.

Hamilton hold all the cards as far as this debacle is concerned.

But this is a media led campaign that will not let up.

The only way to put a stop to it is to strike at the source; Ibrox.