The Ibrox Disaster Was A Tragedy For All Of Scotland. It’s Sad It Doesn’t Bring Us Properly Together. 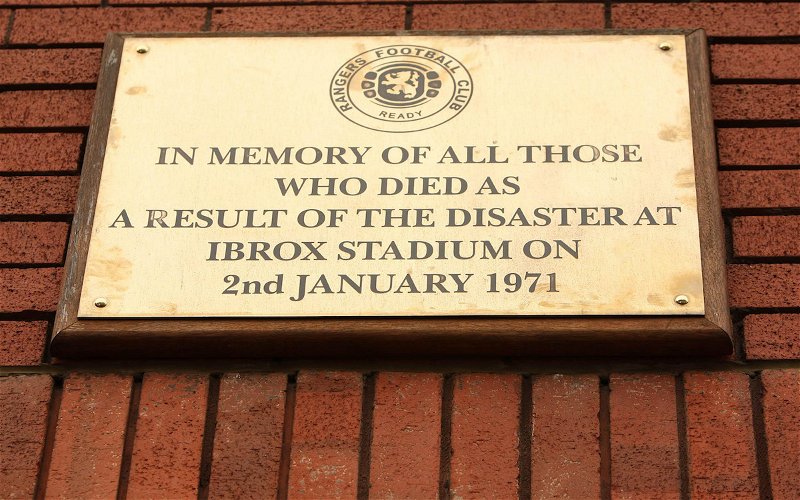 Today I took a silent, reflective, respectful minute out of my day to think about those who died in the Ibrox disaster.

That was one of the most tragic days in the history of this city and for football fans it has no parallel. It is quite simply the saddest, darkest, day supporters here in Scotland have ever known. I hope it is the worst we ever will.

I always hope that about every disaster. Some repeat like a record stuck on a bad player, but this one is different because it was preventable and lessons have been learned from it. Like all disasters created by human error they offer you one shining light, a guidebook for what went wrong and the ways to make sure it never happens again.

Society didn’t learn all the lessons from Ibrox; it never really does.

There’s always a hanging thread, something to snag on later.

Had football learned every lesson it could from Ibrox I don’t believe we’d ever have had a Hillsborough. Antiquated grounds, fans herded like cattle, police and other authorities who looked upon supporters as the lowest dregs of humanity … those are the raw materials of those awful days.

Those things took longer – and a harder, more painful lesson – before they were fully assimilated into the consciousness of the sport and those governing in. Even today, I still wonder if we’ve gone far enough. You can’t see where things could have been made safer with modern grounds; they seem so perfectly planned and laid out. But that’s the way of it with disaster. The holes it seeps through aren’t always visible to the naked eye.

It’s always the thing you didn’t think was possible that ends in tragedy.

The great modern example was the Challenger Space Shuttle disaster; the explosion was caused by the deterioration of O-rings, like rubber seals. They were designed to keep the fuel in the solid rocket boosters from escaping during the fiery launch. They could resist high temperatures. What happened on that fateful day was that the rings had suffered catastrophic deterioration because of an unusually cold spell in the days before it – in Florida don’t forget.

Although the O-rings were capable of withstanding fire, no-one had ever thought to test them against extreme cold.

So whilst I am confident that grounds have never been safer and fans more secure on match-days, that nagging doubt is always there, that worry never quite leaves you. You can’t have watched the footage from Hillsborough or seen that fire rip through Bradford and feel totally confident that attending a game is a pastime that carries no risks.

The dead remember every mistake we made. They haunt us on anniversaries. They are there every time you hear a creak in the stands at a big game when the fans are bouncing; you remember, briefly, that we’re all walking a high wire above a yawning chasm. Anything can go wrong. Everything can go wrong. And sometimes it does.

What you can do is react to those moments and those tragedies like a goddamned human being. The people who died in them were just like us; they went to a football match and they never came home. Can you think of anything quite so horrific?

I don’t care if you’re a Sevco fan coming to Celtic Park expecting a hiding or a Celtic fan going to Paris and knowing you’ll have to watch much of the match through your fingers; there’s always that buzz, that anticipation, that thrill that this is football, that on the right day you can sneak it, that it may end in glory.

Those who think that we, that football fans, are crazy enough anyway … what the Hell must they think on days like that? Hey, I don’t really give a shit what they think, but if they think we’re already a little nuts imagine how they view us when our response to those days is to go to every game for the rest of the campaign, in honour of the dead, and because that’s just what you do on a match day? Is there a word for that, other than “insane”?

Well it isn’t insane. It’s not insane at all.

What is insane, what is unforgivable, is those who see a tragedy like Ibrox as a weapon. And I refer both to the small number of Celtic fans who thing singing about is funny or cool or tolerable in any kind of society – I couldn’t hit them harder enough; on one occasion I did smack one around a Cambuslang kebab shop – and to those on the Sevco side who have invented stories about whole sections of the crowd doing it at our games.

There aren’t enough sick people in the world to make those stories true.

Who the Hell would want to use dead football fans as a way to score cheap points? What kind of mentality comes up with that? Thankfully they are few in number, but their continued existence irks me. In fact, it makes me furious. They are the same sort of people who constantly dredge up the spectre of child abuse as if that was an acceptable comeback to their club being down on its luck. What in God’s name goes through their minds?

One of the men they lambast, one of the men they slander, of course was there on the day of the Ibrox disaster, and helped the wounded, and cared for the dead and poured his heart out over it. He was haunted by those scenes until the day he died.

I remember the Centenary Cup Final at Hampden against Dundee Utd, on those dusty terraces with their old wooden barriers.

That day we were packed in tight like sardines in a can; in hindsight that should have been a scarier day than it was. I think of that often, and of hearing my dad talk about Leeds United at the same ground on 15 April 1970, recorded in the history books with something approaching pride as the biggest attendance ever at a European tie; 136,000 fans … but it was lethally dangerous that night, which the histories rarely mention.

Other records are held by Hampden as well; 149,000 plus fans crowded into the old ground twice in 1937, once for a Home Countries game between Scotland and England and then for a Celtic – Aberdeen tie in the Scottish Cup.

How those events went off without disaster … luck, friends.

What happened at Ibrox on this day in 1971 didn’t happen to Rangers fans; it happened to football fans. It is a tragedy that belongs to one club but it belongs to this city too and to the game in this country. It affected us all, in ways we don’t even understand. Those who died should be respected and honoured. That anyone would use them for illicit purposes is a stain on the soul of this nation. It ought to have been an event that brought us together.

It gladdens my heart to see so many on the Celtic forums and groups paying their respects today; most people do get it. They get what this is. They can wrap their arms around the magnitude of it even if they don’t know anyone who was there or whose lives were changed by it. All our lives were changed by it to some degree or another.

I wish it had made all of us better people, more tolerant, more understanding, more compassionate.

It’s not too late.