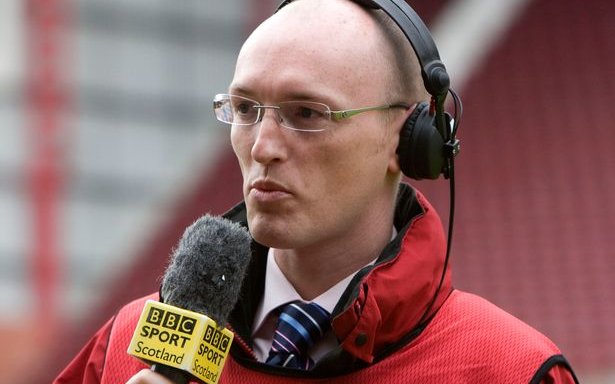 Brendan didn’t just take a slap at Craig Levein today over the ridiculous assertions he made earlier; he also slammed a journalist, believed to be Chris McLaughlin of the BBC, for suggesting that Levein might have had a point when he accused Brown of deliberately getting booked.

Brendan, looking like a guy who couldn’t quite believe what he was hearing, told him that he was being “very disrespectful” to ask such a question. McLaughlin, incredibly, decided to press on with the issue only for Brendan to glare at him, repeat his point about disrespect, and move the issue on.

He was right to.

Only a first-rate idiot would have asked a question like that, and whether McLaughlin realises it or not he’s accused our captain of cheating.

Quite what the BBC’s leading sports correspondent would be doing giving credence to Levein’s ludicrous comments is a question better left to his bosses. Does he enjoy the cold shoulder treatment from Ibrox so much that he wants excluded from press conferences at Celtic Park?

Not that our club or manager would ever take such action, but still.

Scott Brown is a model professional, and in spite of Levein’s despicable remarks he remains one of the best role models in Scottish football. I know people don’t like to hear that, I know they’d rather think of our captain as some kind of pantomime villain, but it’s true nonetheless and there was no way Brendan was going to stand for such an accusation.

It is bad enough when it comes from a goon like the Hearts boss; it is completely unacceptable when this bizarre conspiracy theory is being punted by the national broadcaster.

And whilst we’re on the subject of Chris McLaughlin, when he’s going to clear up the issue I raised here last week, where Neil McCann accused Celtic of holding up the deal over Jack Hendry?

Chris McLaughlin broke the story, on the radio, that the hold-up was on the Dundee end.

I wanted to know, since the BBC is now in the business of apologising over transfer stories, whether McCann had it right or wrong.

A week on there’s been neither condemnation of the Dundee manager for suggesting the broadcaster had lied, nor a retraction from McLaughlin himself.

Some issues are clearly deemed worthy of comment – however stupid – whilst others aren’t.

The BBC needs to sort itself out, it really does.