Trouble Looms For Murty As He Finally Realises Where He Is And Who He’s Working For. 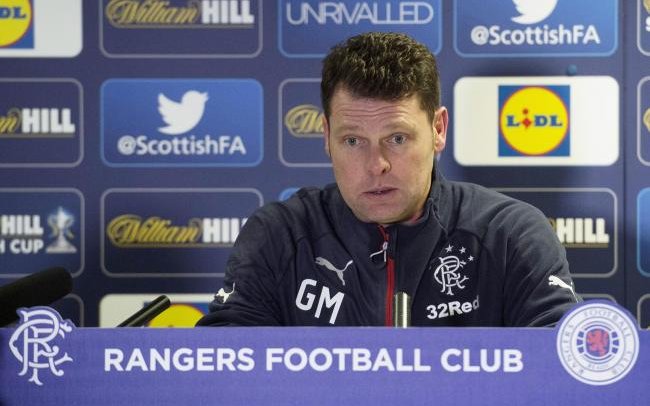 Phil’s latest piece is a beauty, and it requires further scrutiny.

In it, he says that Murty was subjected to a real reaming out at Ibrox on Sunday, by a high profile member of their board. Who could that have been? Well, one guy stands out as a possibility; King himself is in town, and with his Trump-like tolerance level it wouldn’t surprise me if it was him.

The biggest story of last week was the one the media didn’t want to write. All the talk was of how bad it would be for Celtic if we lost. Nobody wanted to focus on what it would mean for the home team. Nobody but our sites, who know it means trouble.

Graeme Murty knows it today, if he didn’t know it before.

Let me be honest; it’s hard not to feel for this guy a little bit.

He’s not Caixinha, coming into this with an overblown sense of his own brilliance or even Warburton, who was a big headed clown who believed all his own hype. Murty was a youth coach who suddenly found himself at the helm.

Nobody would have turned an opportunity like that down and we have to realise that to him this is a dream job, which is turning into a nightmare.

There was a discussion on the radio last night about what this guy will do if he doesn’t end up with the Sevco manager’s job at the end of the campaign; the feeling at Ibrox seems to be that they will simply relegate him back to the youth ranks again.

What an insult that is to him, and he knows it and I would be amazed if he accepted it.

Don’t forget, Murty is not one of the Real Rangers Men. He has no emotional tie to the club but he has shown them tremendous loyalty and was fully entitled to expect the same. A major – and I suspect public – dressing down for losing to the best team in the country? He certainly deserved better than that, and it obviously affected him.

Phil provided a link to his interview with SevcoTV; I wondered why the man had done that.

Because what was in the interview that Phil hadn’t put in the article?

The look on Murty’s face. His demeanour.

Not that of a manager who’d narrowly lost an important match but one who wished he was anywhere other than in front of the cameras in that job.

The article also suggests that Murty was reluctant to talk to the prawn sandwich brigade; I can easily understand that as well. At a time like this, what is a manager but a deflector shield for those whose mistakes are much bigger and much costlier? Everyone in that room would have known that the boss was in for a further, and perhaps harsher, examination from the board in private … and that his job prospects had taken a serious hit.

Who would want to play the role of nodding donkey at a time like that? Who would have wanted to face sponsors and bigwigs and assorted business types, all of whom are looking at you and knowing you’re effectively a dead man walking?

It’s not that the job is bigger than Murty; Sevco is a club with an overblown sense of itself and it might well be that their actual level is perfectly suited to an up and coming boss, a place to get experience and grow into the role. But the club thinks it’s bigger than him. The club thinks that winning is an entitlement and that losing is something that happens to Other People. Every defeat is “unacceptable”. Every setback sparks a crisis.

This one was always going to, and it didn’t take a genius to work out that Murty would find himself under pressure. It shouldn’t surprise us to learn that he and Johannsson are upset; the pressure behind the scenes must be intense. Brendan was right to point that out to the media last week, but they didn’t do a proper examination of it.

They will say, as things get tense for this guy, what a shame it is and how the club has hung him out to dry and all that will be true … but they haven’t helped him themselves with the way they pumped up expectations prior to this game. They created much of the pressure for him, instead of being sensible about the task he was facing.

Remember, Murty is in the job that a more experienced manager – and one with Ibrox in his heart – didn’t want. Our hacks accepted, without question, the Ibrox PR campaign that accused McInnes of being a bottler; in fact, he and his agent had asked serious questions about the level of funding he’d get, the expectations that would be on him, the club’s long term plan and much else … and in spite of his obvious affection for the club, or the club that was, he turned it down.

Murty wouldn’t have asked those questions.

Because for all the pressure this is still a bigger job than he expected at this point in his career.

Shortly before McInnes said no, he fully expected to be returning to the reserves and at that point he looked almost relieved to be. Then, overnight, he was the favourite for the job. A shock announcement confirmed his appointment for the rest of the season.

He never expected to be under the microscope like this.

And he certainly never expected a board, half of which has lost touch with reality, to try to deflect from its own mistakes by pressuring him to keep pace with Celtic and actually mount a “challenge.” He never expected to have to deliver the Scottish Cup to satisfy these unrealistic fools. He thought a good showing over the course would put him in a good position, but the crazies in that boardroom want more. They always want more.

Three managers have already come and gone under this board; Stuart McCall, Mark Warburton and Pedro Caixinha. Murty is number four. The same issues have crippled all of them; a mixture of their own failings the enormous, overblown expectations of a board and a support that cannot accept that they will be second place at best for a long while to come.

The Peepul in the stands and in the boardroom, subsumed in this sense of superiority of theirs, shivering in the shadow of Celtic, unable to deal with that position and the reality of it, expect miracles. Murty has realised, as if for the first time, that he’s the one charged with delivering the undeliverable.

That might not have come as a total surprise though.

What has come as a glacial shock to him is to realise, as he does now, that those in the boardroom above him will show him no loyalty at all for his service on their behalf. Because he is a deflector shield. He is their lightning rod. These people aren’t there to offer him support and encouragement; they are a firing squad, loading their guns, all the better to take the pressure off themselves. They will sacrifice him to save their own skins.

And that has to hurt, and you could see it on his face. He’s finally realised what those of us with the benefit of distance already did; where he is and who he’s working for. Men without scruples, men who’ll show him no mercy. As the ship goes down, man oh man … that’s a bad place to be.