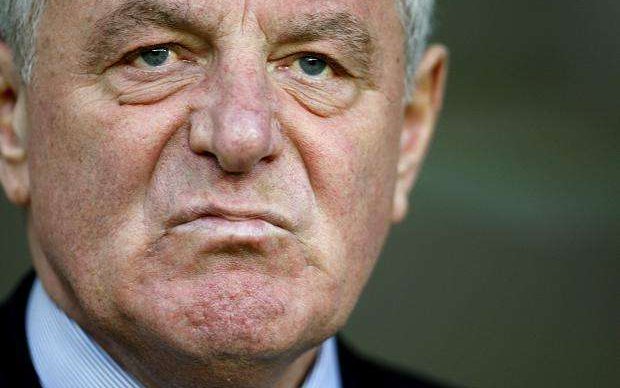 Walter Smith made an intervention into Sevco’s affairs yesterday, offering an opinion on their managerial situation. In one sense he was right; they do have to get on with making a decision there, because it is a farce to let Murty carry on until the end of season without knowing if he’s getting the job full time. Decisions have to be made which only the man who will be in the dugout next season can make; if it’s not going to be him he needs to know.

He was also right about Celtic having established what he’s referred to as “a natural order” of winning titles and being the dominant club.

Where he gets off the rails, as per usual, is when he talks about what Sevco needs to overhaul us; I bet you can guess before I even post his remarks.

“They need to make sure the next manager is going to bring a level of stability and a better and more consistent challenge to Celtic,” he said. “But it also needs a continued level of investment. It is not rocket science and (they) must try and find that.”

But the finer details of it are apparently too complicated for him to understand; there is no money and nobody is going to give them tens of millions so that the Peepul can feel special again.

Spending huge sums on transfer fees to chase the SPL title is not an “investment” of any sort.

There aren’t enough stupid people in the world.

Sevco fans give this guy a free ride; they still see him as some kind of saviour. But had it not been for Smith and this attitude, I really do believe Rangers could have been saved. He put himself and his legacy first, and then ran for the hills when it became clear that the damage was done. He then returned briefly to shill for Craig Whyte.

And yet they worship him over there, when he was one of the man who sank them.

The rocket science part, the part that is apparently too difficult to gauge for him and others, is in answering where exactly it’s coming from; you’ll notice that he offers no advice or guidance on that. There was a time when he might have volunteered to front a takeover, but he now knows exactly what that would involve and as good as he is as spending other people’s money Walter Smith never offers to put up his own personal wealth.

The Real Rangers men really believe money grows on trees; I suppose I might too if had been part of one of the largest tax scams in sports history, and watched as the “glory years” which made my name all ended up paid for by the Treasury and therefore the tax payer. They say the public sector is like a magic money tree; who knew back then that Rangers was considered part of it?

What the Peepul haven’t twigged to yet is that everything has changed. Their former club has gone and the new one doesn’t have access to bottomless funds.

That’s why their future is mediocrity … if they have a future at all.