It’s One Thing To “Get It”, But Like Griffiths And Brown You’ve Got To Be Good Too. 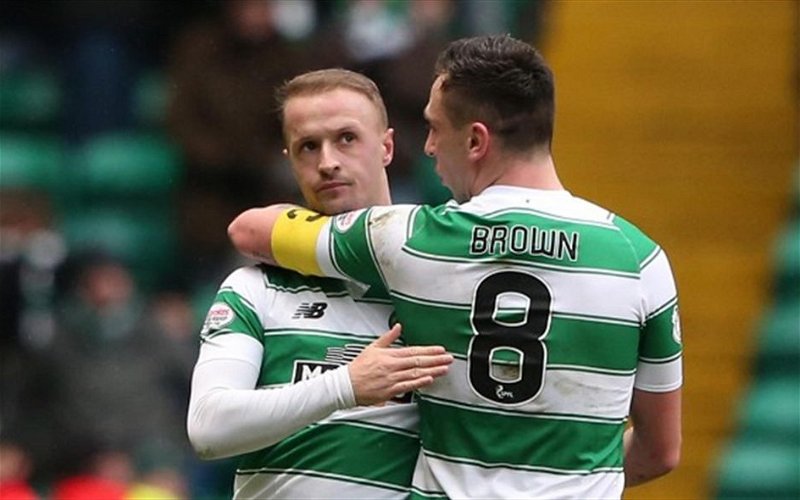 Sevco has put Kenny Miller back in the starting line-up today.

And when you see something like that it dawns on you; there are people at Ibrox who really do believe in this “players who get it” cobblers.

The thing of it is, there’s one guy at Ibrox today who does “get it” and what it means for them to win this game; he’s sitting in the opposite dugout, which is why I expect Dundee to roll over and why the Miller experiment might even “work.”

The game is being played right now, but it might be over by the time you read this, but this article isn’t about the game.

It’s about the Miller decision, and it’s about how deep this idea goes over there. And there’s an element of it at Celtic Park too, in the week when two guys who clearly do “get it” have spoken about their love of the club and how their future is here.

The irony – and it is one wholly lost on Sevco – is that neither Scott Brown nor Leigh Griffiths was “born to the cause” as guys like Kieran Tierney are. They are both Hibs boys, hailing from Edinburgh, who came here because it was a good move for their careers … both now indisputably “belong” to Celtic, to the ethos, to the support.

But part of that is that they’ve become Celtic players. They’ve played their way to that status. That came first. The appreciation, the adulation, the success … it didn’t come by accident, but because the two players rose to the expectations we had for them, and they had the talent to make good on the opportunity. Even those players from our youth ranks who “get it” never become icons until they prove themselves worthy of that status.

Getting it isn’t enough. Sevco’s brilliant turnaround plan, which depends on finding players who do “get what it means” to be an Ibrox player is based on a fundamentally ludicrous premise; the “getting it” comes first. They will pick their players based on that criteria, and if that really is the future direction – and look at their January signings, and watch for who the next boss ends up being – then they can look forward to regular mid-table scrapping.

Look at the level of talent of those players who played at Ibrox down the years who did “get it”; with the exception of Steven Davis, Lafferty and maybe Naismith, who I never thought were all that great either by the way, there wasn’t much to work with. John Brown’s and Lee McCulloch’s aren’t the sort of players who win leagues and mid-table struggle is the appropriate level for the Russell Martin’s and Jamie Walker’s of the world.

The likes of Laudrup and the Dutchmen like Van Bronckhorst didn’t “get it”; Rangers was just another club to them. The De Boer’s didn’t really care one way or another. Do you think Amato or people like that feel a special affinity with Ibrox? Do they Hell. These guys didn’t have to “get it”, they just had to be good enough to bring success.

Some players grow into a club, and it finds a place in their hearts.

They “get it” and many of them become lifelong advocates and supporters.

Celtic’s history is filled with them. But we didn’t sign Henrik Larsson because he “got it”; he “got it” after realising where he was and what this club was all about. But read what Logan Bailly says about Celtic; he is a diehard now, a fan till the day he dies. He “gets it” and yet he barely featured in the team.

Chick Charnley “got it.” Dozens of players, all over Scottish football, “get it” and what Celtic is all about. And most of them can never hope, in their wildest dreams, to pull on the famous hooped shirt for a match except in backyard games with their kids.

It’s not a magic wand that makes you a better player. If teams full of people who “get it” really did win leagues, why do they bother with signing players? Pull people out of the stands and stick them out there on the park. They all “get it”.

Of all the dopey ideas at Sevco, this one is my favourite. Pray that they follow it through. Pray that knowing all the words of Follow Follow replaces the old “what school did you go to?” question as part of the signing criteria. The laughter will never stop.