Martin Canning Is Talking Rank Nonsense To Deflect From His Own Negative Tactics. 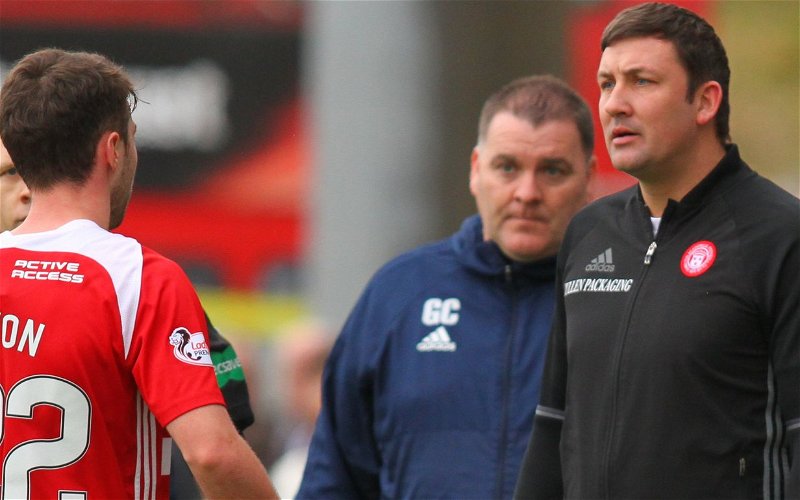 Martin Canning is having a right old strop about yesterday’s game, isn’t he?

Blaming Kieran Tierney for his own player’s thuggish, neddish behaviour … and the Celtic fans to boot.

That’s a new one.

Quite what the supporters did to deserve that I don’t know.

Canning is the latest in a long line of managers who’ve pulled this nonsense after a defeat.

There’s always some external factor to blame for it. They are going to say it was the red card yesterday; let’s be honest, we didn’t even get out of third gear. We played the ball about like a team of players who were holidaying on a beach with their kids.

It was boring to watch, but as I said yesterday it was as effective as it needed to be. No more and no less. And that was down, that was solely down, to the “quality” of the opposition, who barely got out of their own half and certainly made no effort to play football in an attacking sense after going down to ten men. Nor much before it, if I’m being honest.

Canning is angry because his negative tactics didn’t succeed. He is angry because people around him will have told him that in order to take as much as a point from the game that his side should have tried to maybe get the ball up the park a bit. He is angry because we scored early in the second half and he had no idea how to respond as his entire team plan was built around shutting us out and keeping the score line at 1-1.

I meant what I said yesterday; that was one of the most negative displays I’ve seen from any team we’ve come up against since Brendan took over. I understand the imperative to close out a game when the score is tied, but a single goal down at home should necessitate a little more adventurism and a lot more effort. It was a pathetic response from them.

Canning is now seeking to frame the whole game around one decision, and one where he only has his player to blame. The media response to it seems to be that it was a soft decision; it was clearly a deserved one though. The guy had already escaped censure for a lunge at Kieran before being booked. Anyone stupid enough to throw a player to the ground only minutes after getting the yellow card he’s been begging for all game deserves to be censured rather than defended. If Canning lets that kind of behaviour go he’s making a rod for his own back.

It was a neddish and stupid act but no less stupid is his manager’s lame attempt to palm it off as someone else’s fault. Martin Canning is fishing for excuses, excuses which will act as a deflector shield from his own managerial cowardice.

We won yesterday without even hitting our stride and we did that because his tactical decisions allowed us to. They were weak. They were gutless. I guess he thinks that Celtic’s fans and our young left back look like an easy target in the aftermath. He’s wrong.