Sevco’s Fan Groups Are Biting Down Hard On Insanity As Darkness Sweeps Over Them. 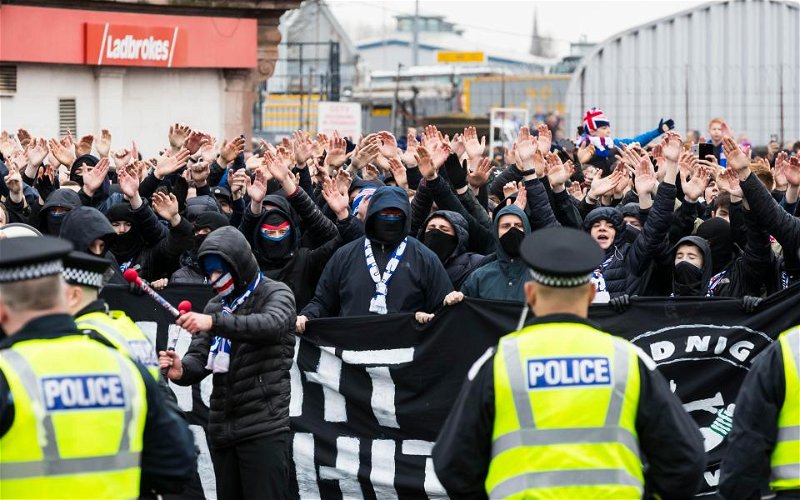 Regular readers know I’m a huge fan of cool TV shows; one of my favourites, because of the sheer nuttiness of the characters and the storylines, was the gothic, sexy True Blood. Set in a world where vampires have “come out of the closet” and where they co-exist next to humans, living off a Japanese made synthetic product called Tru Blood, it was a wacky parable of race relations, religious extremism and the fear of being “different” in America.

There’s a character in Season 3 named Russell Edgington – The Vampire King of Mississippi. (It’s exactly as crazy as it sounds.) He is arrogant and egotistical just like the Sevconuts. As his character develops over the series, there’s a story playing out in the background; the proposed passage of a law called the Vampire Rights Amendment, which will give them equal status with humans in American society. Almost all vampires support the law.

Except for those like Russell. “Why should we seek equal rights?” he sneers at one point. “You are not our equals … We will eat you. And then we will eat your children.”

And every time I hear it I think of Sevco. Because that’s their attitude to a T. Their fans are as bonkers as Russell Edgington is in that moment, absolutely unable to see past their own grand vision of who they are and what they represent.

Did you read some of those barking communiques issued by their supporter organisations last night? Jesus wept, have you ever read such shrieking self-entitlement in all your life? These swivel-eyed goons really believe they have a divine right to win things.

They’ve disappeared so far down the rabbit hole of their own self-aggrandisement they can barely remember what it looks like up here on the surface, in the real world.

They are a club that exists on the wrong side of rationality, immersed in a darkness that seems to come from within the walls. They are permanently stuck in this crisis loop, like a hamster in a wheel, because they refuse to engage with reality.

The viciousness on their forums has reached staggering new heights. I am sure you can imagine. Last night, I kicked someone off the blog’s Facebook page because I thought he had posted a “hope you die in your sleep” song about Graeme Murty; in fact, I reinstated him after learning that he was re-posting, in disbelief, something he had seen on a Sevco page. When they are using such language against their own manager you know how bad it’s got.

And he’s not the only one of course. The hate pours off some of the threads, directed against their own players, their directors, and of course the usual outside targets. When I posted the other day, in shock, at Ibrox Noise’s contention that there was a “fifth column” inside their own club – too many “Celtic minded” people – I couldn’t have imagined how deep into the psyche of some of the fans the idea actually reaches. Large numbers of them believe it.

Large numbers of them continue to believe that James Dornan the MSP fabricated a leaflet so as to smear them. Many believe the media is sitting on a game-changing story relating to court cases involving historic abuse. That they would cling to such a hope is disgusting, and proof of how far down into darkness they’ve gone. But actually, that’s cake compared to some of the other stuff I’ve read and seen. A lot of them are clearly sick people.

I knew the result this weekend would tip some of them over the edge.

They’ve been teetering on it for weeks, since we left Ibrox with the three points. But I have to say, even I was amazed last night to read the foaming at the mouth fury of their statements. The one from the fascistic Union Bears was particularly amusing; a silent protest at their next game.

It’ll be a lot like their silent protest at Hampden, then, right?

Were they even there?

Silence would do some of these people the power of good.

The more they spit fury at the world the more backward the rest of their support – and thereby the club – continues to look. Graham Spiers got into a spat with some of them last week over the way their club is portrayed, and he echoed sentiments this site has before; “then change the record.”

“Some Rangers supporters remain angry at their public reputation,” he tweeted. “Their problem is, decades of bigoted chanting and behaviour are not easily washed away. And most certainly not when these songs continue to be heard.”

You know what that thread descended into? Sevco fans spewing hate and trying to turn the conversation to the “sectarian school system.” Because in their blindness they can’t even see what they are and where the hate really comes from; they want to try the mirror.