Yesterday, Keith Jackson Went All Reservoir Dogs On Sevco. That Is A Man In A Whole Lot Of Pain. 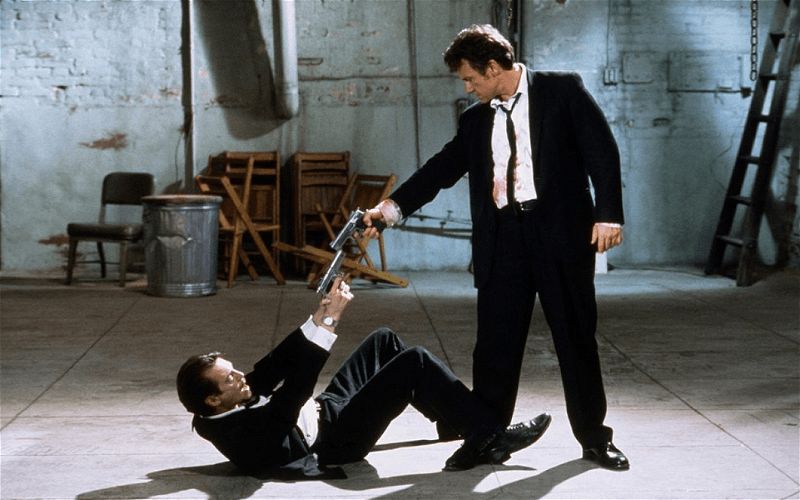 Last night I read, with something approaching utter disbelief, one of the most extraordinary, vindictive, bitter, personal attacks I’ve ever seen in a national newspaper.

Bear in mind that I came to all this as a former political activist with a degree in media studies and so I’ve read my share of off-the-leash attack dog articles in my time, and this was up there with any of those about Neil Kinnock, Ed Miliband, Alex Salmond or, especially, Jeremy Corbyn.

I am not kidding. This really could have emerged from the editorial pages of The Daily Mail, targeted at a left-wing politician.

Jackson did not bother to engage with the facts.

He did not waste the readers time in even pretending to be objective.

There was not the least pretence that he was writing a news story.

It was the closing scene from Reservoir Dogs with bullets flying and blood everywhere and where you weren’t even sure who was blazing away at who.

The only other frame of reference for it is another movie; it reminded me of that moment in Aliens where the Colonial Marines are inside the nest on LV-426 and the creatures start coming out of the walls and the military unit simply disintegrates and disregards any semblance of professionalism or training and starts shooting at everything.

This was fear and loathing and madness and pain.

Oh, there was just so much pain.

First Jackson was blasting away at King, the man he cheered into Ibrox like he was in a short skirt waving pom-poms in the air. (Try getting that image out of your head before bed time tonight; Good God man.) Then he was taking pot shots at some of the players like a crazed sniper on a rooftop. Yet finally he zeroed in, like a man shooting at flies with an elephant gun, on the real cause of his anguish, or so he seems to think; Graeme Murty himself.

And I guess when you’re firing blindly with a blunderbuss it’s hard to miss at least some of what you’re aiming at.

Headlined “Blundering Rangers chief Dave King should have axed Graeme Murty not Kenny Miller and Lee Wallace,” the article offers an astonishing insight into how traumatised some of those in the newsrooms and the Ibrox stands really are.

Honestly, if you’ve been on Twitter or Facebook or on their forums at all in the last few days you’ll have seen some of it. You can’t have failed to. A single result has sent them all unspooling. But Jackson’s article offers perhaps the greatest overview of the tormented, and wretched, state they are in.

Referring to the board’s decision as one that makes “outcasts and scapegoats of their two most senior and respected professionals”, it not only lauds dressing room wreckers and leakers, at least of one of whom has previous for undermining managers, but it violently tears out the pages of Jackson’s own back-catalogue and seeks to rewrite history. 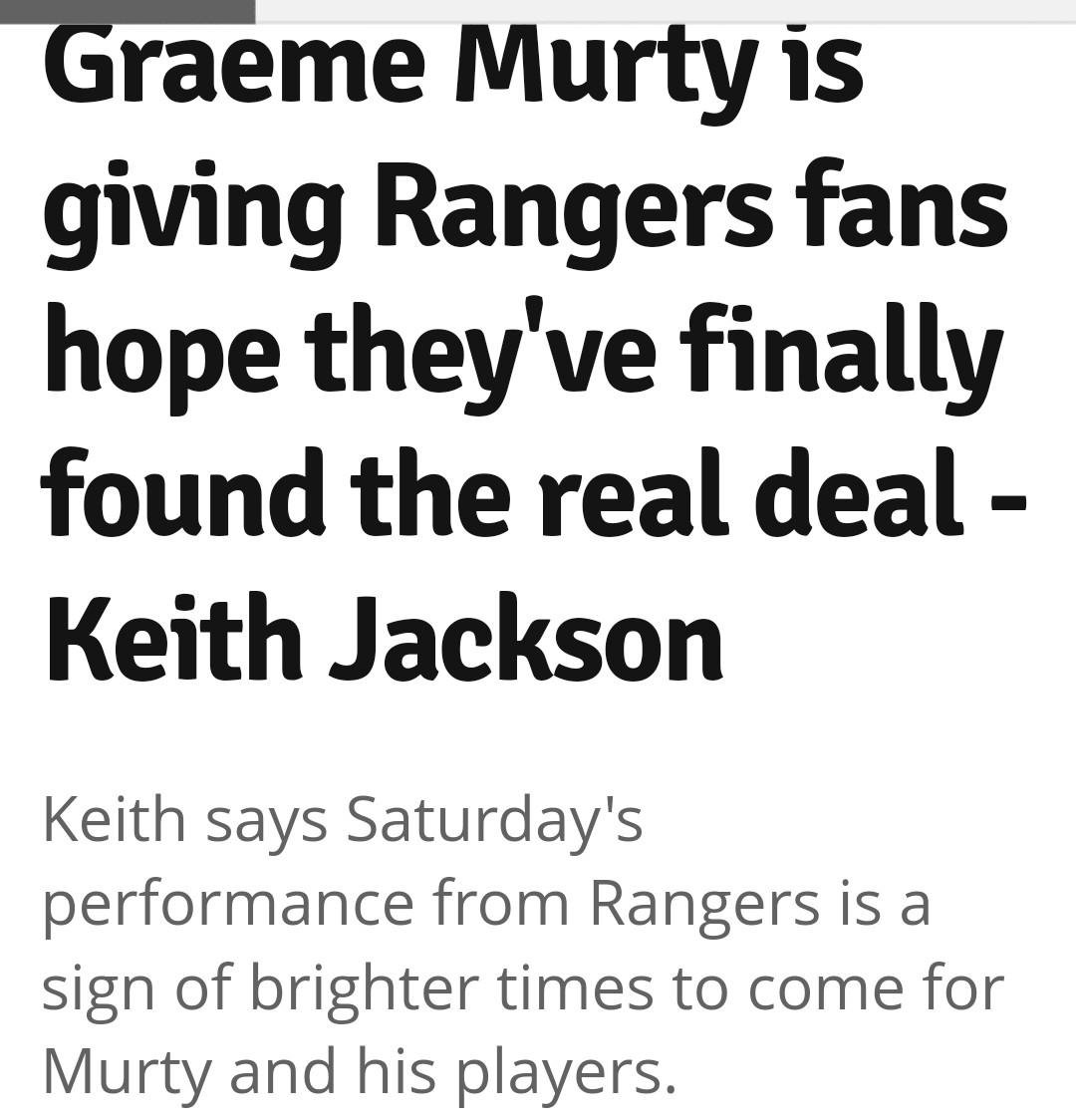 Well pray tell exactly how that one tallies with the following lines;

“That it was as a direct result of Murty’s naivety, inexperience and lack of leadership that this toxic issue was dumped on their doorstep in the first instance …. Any manger worth his salt would have seen this s***storm brewing from a mile off – even as Celtic were mercilessly disembowelling his side on Sunday afternoon – and taken appropriate steps to ensure it did not get out of hand … But, rather than do that by protecting his players and leading them from the front, Murty was busy attempting to limit the damage only to his own reputation.”

And it descends into mud-slinging from there.

“The substitution of Andy Halliday moments before half-time was not only a grotesque moment of grandstanding but also a blatant attempt at self-preservation … Worse still, it perfectly illustrated the lack of empathy between this stand-in boss and the group over which he has control. Rumours abound of a breakdown in communication between Murty and these players that stretches back weeks and months … There is a feeling, at least among a large section of this dressing room, Murty has failed to show his players any kind of professional courtesy or respect. This is perhaps why so many tell-tale signs of indiscipline and disharmony bubbled to the surface on Sunday as derby day reached boiling point.”

A breakdown in communication that stretches back months?

If that’s true then why were the geniuses at Jackson’s paper – including the man himself – spoon-feeding the fans utter tripe about how great the atmosphere was at the club and how everyone was pulling in the right direction? Who do they think they are kidding here?

That attack on Murty is all the more extraordinary because Jackson offers a contrast between that and the so-called “professionalism” of Miller and Wallace, which is bizarre as there’s barely a person in Scotland who doesn’t know the role Miller played in undermining Caixinha. It’s all well and good Jackson and others wailing about how these two players “get it” and want what’s best for the club; since when does destabilising the dressing room help with that?

Maybe Jackson isn’t wholly aware of what went on in the dressing room at full time on Sunday? That could be the case, because as we all know his loyalty to the King cause was rewarded by the club effectively banning him from the Cool Kids table because he dared ask a handful of the questions that his job description calls for … much too late in the day, of course. But it soured his love for the man he was so keen to see take the keys in the first place.

He offered up this insight in the Murty piece.

“For King’s board to … hope sacrificing Wallace and Miller might make it all go away is another indication of their own mismanagement of a club that has lurched from one humiliation to the next since they first stormed into the boardroom, armed with the best of intentions but precious little else.”

Funny that, because as recently as November last year he was writing vomit inducing dirge like this, as though a spurned lover writing one last letter to his ex;

“When, in March 2015, Dave King and his big blue band of co-investors liberated Rangers from the litany of loathsome characters who had burrowed their way into the Ibrox boardroom, they were not just writing one of the most significant chapters in a narrative which stretches back to 1872. They were scoring one of their club’s greatest-ever victories … Theirs was a triumph which brought closure to a period of unprecedented chaos and turmoil. The last dramatic act of a trauma which unleashed administration, liquidation and all manner of anguish and distress on a disbelieving support. King had delivered salvation from all of it.”

Jackson will rightly point out that the article in question was actually asking hard questions; I would stipulate they weren’t hard enough, but regardless, he is technically correct. But it included these absolutely brazen lines;

“The lack of leadership coming from King – the deafening silence from his chair – is an insult to all of those Rangers fans who supported his boardroom coup and who have poured millions into the club’s coffers ever since … The ticket of openness and transparency on which King campaigned has been long since ripped up. It’s pieces gusting around in the cold draft behind those roller shutters.”

Jackson was one of those who supported King, and he continued to do so long after it became clear to even the most deluded that this guy was at it. The “openness and transparency” that was promised was an obvious fairy-tale that only the stupidest person could have believed in, and that’s what’s always galled Jackson and others the most; they were lulled by it, completely, because they were desperate and because they wanted to be, and in the same way they were caught up in the ridiculous euphoria that surrounded Murty only six or so weeks ago.

That article articulates the anger, and the very real pain, of somebody who’s literally the last to know that their other half has been doing the dirty behind their back.

It’s the fury that comes from looking in the mirror and asking yourself the dreaded question, “Just how big a mug have I been here?”

Take stock for a moment.

Did you buy them a ring? Did you pay their credit card bills? An expensive holiday? Buy them a car? Did you look the other way from things that your made your skin crawl and your guts clench? Did you keep on believing anyway?

Did you buy season tickets? Family packages? Corporate seats? Did you, for the love of God, take out a Direct Debit to pay into Club 1872? Did you swallow your doubts and get behind Pedro? Did you tip Joey Barton to be player of the year? Did you write gushing articles about how great it all was? Did you swallow “going for 55” like it was Kool Aid?

How big a mug?

How long’s a piece of string?

It’s the pain that comes from understanding that you believed what you wanted to, even when the evidence to the contrary was piled up like snowdrifts around you. It’s the abject despair of knowing that other people have been sniggering behind your back and that today they’re not even bothering to pay you that modicum of courtesy.

Hey, anybody might buy London Bridge in a one-off payment, in a handshake deal, if caught at just the right moment, in the right frame of mind, by a smooth-talking salesman whose eyes gleam like a rodents but who assures you that it’s all on the level.

That makes you a fool.

A mug is somebody who buys it in sizeable instalments and keeps on paying them long after finding out that it was really sold years ago and is now in Arizona and that the salesman you spoke to is a two-bit huckster with 41 tax convictions.

The trouble with Jackson, and where I take issue with this vicious lashing out, is that nowhere has it dawned on him, or a lot of the others, that this is all about perception and not reality. It stems from this believe that a club calling itself Rangers has a divine right to compete, that spending money comes naturally, that when those who “get it” are running the show that everything will be okay. And that’s where the problem will continue to be.

Because those who really “get it” are those who know it’s a fantasy these Peepul are living in.