Jackson Turns The Guns On Sevco As Gerrard’s Hangover Starts For Real. 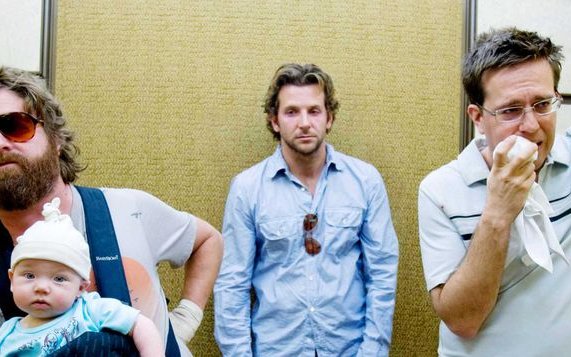 The crazy stretch of The Hangover begins when Alan wakes up in the morning after the night before and goes for a pee.

Still stuck in sleep-delirium, he walks through a wrecked hotel suite without even noticing, kicks a chicken out of the way without ever wondering where in God’s name it came from, and strolls into the bathroom. He’s in mid-stream when a tiger growls just off to his right. He turns and looks at it, in a fog, and turns back to finish peeing … and then reality hits him like a hammer (or as much reality as he’s personally capable of) followed by panic.

And that’s sort of akin to what Steven Gerrard will feel like when he walks into Ibrox at the end of this week. If everything up until now felt like a dream this is where the nightmare starts and none of us needed Keith Jackson to point that out to us this morning.

The guys who make up the cast of the sorriest bachelor party aftermath ever find various things in the course of the next hour and a bit; a missing car, missing teeth – and, of course, there’s a missing groom – a missing engagement ring … oh yeah, and a baby in a cupboard.

All of it is fairly … low level.

It’s a lot better than walking into your new job and finding out that the people working under you are all incapable, some excel at stabbing each other in the back, the people above you are raving lunatics, hopelessly out of their depth, the customer base is nuts, the competition is streets ahead and the promises you were made about money to fix the place up have all the value of Lloyd’s famous suitcase of IOU’s in Dumb & Dumber.

Everything about Ibrox will be screaming “Amateur Night!” in the brain of a guy who is used to the infrastructure and professionalism of a Premier League giant. He is used to dealing with people who are of the highest calibre. At Ibrox, he will be greeted by chaos, and by the likes of John Brown, the kind of person who really would ask a desk clerk at Caesar’s Palace if the real Caesar actually lived there. Something tells me he’s not going to be impressed.

His description of the Ibrox boardroom echoes everything Phil has been writing for months; “A chaotic backdrop of internal squabbling, uncontrollable egos and personal agendas which all seem to come before the actual job of putting a winning team on the pitch.” It paints a picture that is about as dysfunctional as could be. And it’s a distilled version.

His paragraph on the Ibrox squad is laugh out loud funny, both because it’s hilariously recognisable and because not one of the hacks was saying this when we were rolling up to Ibrox as the “under pressure” side not two months ago. Jackson writes of a dressing room “awash with averageness and littered with no-hopers, clinging for dear life to the kind of contracts no other club in football would have been daft enough to give them.”

You can feel the pain and anguish seeping off the page.

Yet even an article which reaches for reality contains some of the most ridiculous commentary imaginable; even as Jackson accepts that the club is a chaotic disaster area, he still writes the worst nonsense, such as the following;

“That Gerrard will aim high in the transfer market is a no-brainer. What would be the point in bringing in a man of such a global standing if he is unable to dip into his own personal contact book for the benefit of the club?”

Jesus Christ. I mean, is there an award for stupidity such as this?

He calls the Skrtel fiasco “something of a mystery” when the only mystery is that anyone ever believed that this deal was likely. He expresses his surprise at the time it’s taking for the club to close a deal for “Brighton’s third choice centre back.” That’s no mystery either; Brighton want actually money for him and Sevco has none of that.

He rightly surmises that Gerrard will already be baffled by this, but nobody with the first clue as to how things work at Ibrox is.

I laughed out loud reading this line.

“It will be fascinating to see if Gerrard will now revise his initial list of targets or if he’ll continue to go after the kind of players who would otherwise have been out of (the club’s) reach.”

Which part of this is Jackson failing to understand? Any player who was “out of their reach” before Gerrard arrived is still out of their reach. If Gerrard wants to waste the summer sending the hapless Stewart Robertson chasing shadows, like the worst best men ever from the movie, well that’s his lookout, but the sooner he comes to terms with the reality of the club’s situation and starts to deal with that the sooner he can start looking for a new job.

(You thought I was going to write “the sooner he sorts it out”? Haha.)

Yesterday I wrote a long piece about how the Sevco fans need to wake up to the truth about the Gerrard appointment. They aren’t the only ones.

But it’s nothing on the horror facing the manager himself when the fog of sleep clears and he realises the chaos he and his sidekicks have inherited. But Phil, Stu and Alan from the movie are the victims of a situation that none of them (deliberately) created. They are unable to remember what happened … Gerrard and his people have no excuses. They walked into this willingly, and apparently without doing due diligence.

Ibrox is a place where it’s already difficult to feel sympathy for a living soul. I find it impossible to muster one iota of it for Gerrard and his management team. Daft enough to believe a single word that came out of Dave King’s lying mouth, but the impression remains of a group of people arrogant enough to believe that Scottish football is an easy number and that the only thing wrong with Sevco is that it’s been badly managed from the dugout.

Jacskon’s article might well be the first one from the mainstream media to spell this out a little more clearly to him, but even that offers Gerrard no alibi. There are people who could have clued him in, had he asked. But he went out of his way not to ask, especially the one man who would have given him a dose of the truth that might have convinced him that it was a bad idea.

Nothing that comes to pass will be as bad for Gerrard as, say, being savaged by a tiger would be. But it’s not exactly going to feel like being kissed by Heather Graham either. Think something more in the middle; think being punched senseless by an irate Mike Tyson.

This is a hangover that’s going to last him a long time.

Perhaps for the duration of his career.

And he deserves it.

In three days the full scale of his folly will become clear.