The Louden Staff Sound Like Absolute Idiots With Their Whiny “No-One Likes Us” Nonsense. 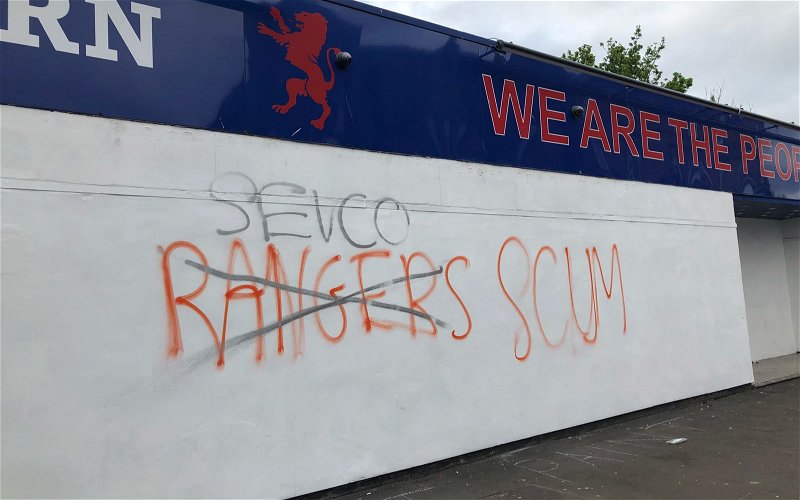 Over the weekend, some halfwit with nothing better to do decided to spray paint the front of a pub.

Nowhere else would this be a news story.

It’s a simple piece of urban vandalism, a little graffiti that’s no different from that which is often painted on the walls around Celtic Park.

It must be a slow news day in Glasgow when this is making headlines.

What I find fascinating about it are the comments from those who work there; talk about absurd.

One of them suggested that it was as a result of the Steven Gerrard signing.

“A lot of people have panicked,” this un-named eejit said.

Call this what it is; an act of criminality and stupidity. Where’s the need to try and turn it into something, anything, more?

These Peepul just can’t help themselves.

It was some half cut yahoo, nothing more.

Nobody is “panicked” over Steven Gerrard; I don’t know a single Celtic fan, not one, who is even remotely concerned about that appointment. The suggestion that young neds need an excuse to behave irresponsibly is just dumb.

Not content with talking balls about Gerrard and trying to make a little spray-paint into a symptom of fear, the staff member then demanded that the Scottish Government get involved. I mean, really? What? Is there anything else the Louden staff want to declare a national emergency over? Like littering perhaps? Bad spelling on blogs and forums?

Here’s one; how about the latent sectarianism for which the pub is allegedly notorious?

The article quotes the staff member as calling what was painted on the wall “a hate crime”; it was the word “scum.”

The dictionary broadly defines this as referring to “a very bad or immoral person or group of people.”

I mean, what else do you call someone who engages in that sort of behaviour? Who belts out the worse kind of bile? It’s clear to me that a lot of their supporters are scum. Some of them undoubtedly drink in The Louden Tavern. If that’s a hate crime, then I look forward to my trial.

Nevertheless, it’s nice to hear that those who work there and run the bar are concerned with that kind of thing, and a more tolerant country. Maybe they’ll ban anybody who drinks there and who starts to sing The Billy Boys or The Famine Song or any of the other bigoted dirge that can allegedly be heard blasting through its four walls on any given day.

But I rather think not.

Celtic fans are getting blamed of course; I think it’s the proper spelling that was the giveaway.

Sure as Hell that person doesn’t write for Ibrox Noise.

Even so, the person who did the spray-painting is an idiot and I hope they are caught and prosecuted.

But for the rest of us to be subjected to such self-pitying and hypocritical whingeing such as this … well it’s just not on, is it? Who do they think they are? They can give out those kind of lectures when they get their own house in order.

The Evening Times has clearly run out of subjects to cover.

This is not news. It’s a minor story, and yet they have two separate articles about it. Other media outlets are following suit. It gives Sevco fans another reason to feel put upon though, to feel like victims, to push this line about “obsessed rival fans.”

They’ve dragged at least one national newspaper to their level of debate; congratulations for that, I guess. But it says more about the pitiful standard of journalism in Scotland than it does about the mood on the streets.

None of us is served well by “reporting” like this.