The So-Called Price Tag On Kieran Tierney Doesn’t Mean We’d Accept It Or That He Would. 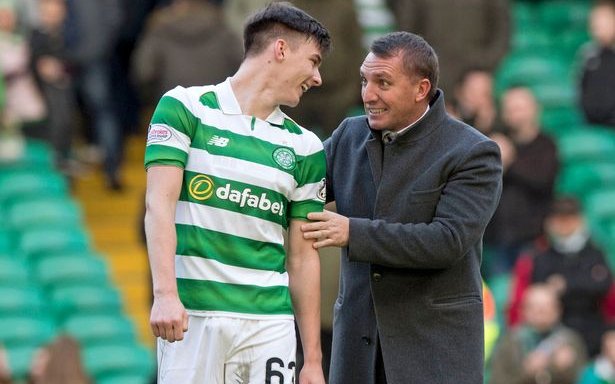 Isn’t the media something? If they are not trailing utter bollocks about Sevco being in for 35 year old Jermaine Defoe they are gibbering about Kieran Tierney and the £30 million price tag we have allegedly slapped on his head. As if this means a club which offers it would get him automatically.

It’s not the case.

£30 million is merely where the auction would start if there was one.

There is a view in some quarters of the mainstream media that will practically shove Kieran out if an offer that size comes in; we’re not Sevco, desperate for money, willing to disavow a player who has pledged loyalty to us because we hear the sound of cash registers.

A player good enough to command a mammoth fee is a player we’d want to hang onto as a club, and any player of that quality would be at Parkhead as long as he wanted to stay.

I have heard various players talk about what it’s like to be at Celtic over the years, but I have heard few ever speak with such passion and affection for us as Kieran does. His language about us is glowing. He seems genuinely thrilled to be at the club.

This is not to say that he wouldn’t leave at some point, for some other club, in the future … but it won’t be to a club like Bournemouth, not for all the money in the world. If he does decide to go he will leave for a club that can raise his emotions like this one does.

The summer is going to be full of this. It’s going to be full of nonsense about players Sevco are after (but they will get precious few of them) and about those we’re letting go. It will be torturous at times, and we will wonder where some of it is coming from. But in the end I think the mainstays of our squad will be here at the end of it.

Kieran Tierney definitely will. In a sport filled with people who know the cost of everything but the value of nothing he is a bright light and for more than just his ability on the ball. Celtic know what they have here; a player who can play at the very highest level.

In spite of what you’ve read elsewhere we will never wilfully push a guy like that out the door.