Alex McLeish Is Just A Sevco PR Rep. Why Not Let Him Pursue That Role Full Time? 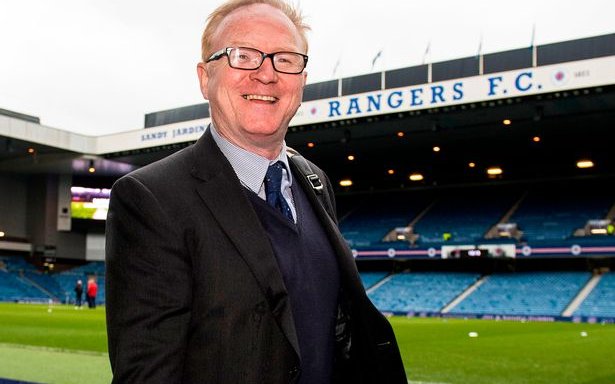 Since he took over as Scotland manager, one thing has been ever present on Alex McLeish’s mind; Sevco. He has talked about them more than some Celtic blogs have. (Wee bit of self-deprecating humour there, folks!)

He has talked about Celtic too, of course. For the third time in just over a month, he has referred to the rest of Scottish football as not being “a level playing field”; I am not longer of a mind to give him the least benefit of doubt on that front. To keep using the phrase over and over again in the fashion he does is not the actions of someone unsure of what he means. It’s no longer enough to say that he’s misunderstood it. He hasn’t.

Alex McLeish thinks our club has an unfair advantage.

But I’ll get back to that some other time. For the moment, let’s focus on his Ibrox fixation. It is very real. He talks so much about the club that one would think he’s auditioning for some role there, which my guess would be that he is.

You know, Sevco fans indulge in a lot of paranoid nonsense but when they suggest that a lot of people in Scottish football want Gerrard to fail they are quite correct. Not all of those people are of a Celtic persuasion. Not all of them are strictly “neutral” either. Some of them have Sevco close to their hearts and think, deep down, that if the club was willing to hire two bosses with no prior managerial experience (and Warburton, who had a year of it) then why shouldn’t the directors be willing to take a wee punt on them next time?

McLeish would probably like to see Gerrard fail, as it improves his chances of getting the job one day. But in the meantime, every time the club needs a positive story or a player bummed up or simply just a nice spin on things, this guy is wheeled out for the crowd. The press seems to have him on permanent speed-dial to say nice things about them.

I am moved to wonder why Scottish football is paying this guy a salary when he appears to be little more than PR spokesperson for one club? Why not just let him pursue that role full time until the Sevco job itself becomes available again? (In about six months.)

Honestly, this is what we’re back to. An SFA official who sees only one club as a benefit to the country.

The same guy who’s talking about the positive impact Gerrard will have here will, later on, and mark this down for posterity, be pontificating on how the next foreign player Celtic signs is a bad thing for the game, opens the gap further, keeps a young Scottish player from playing in the first team … you could write the script right now.