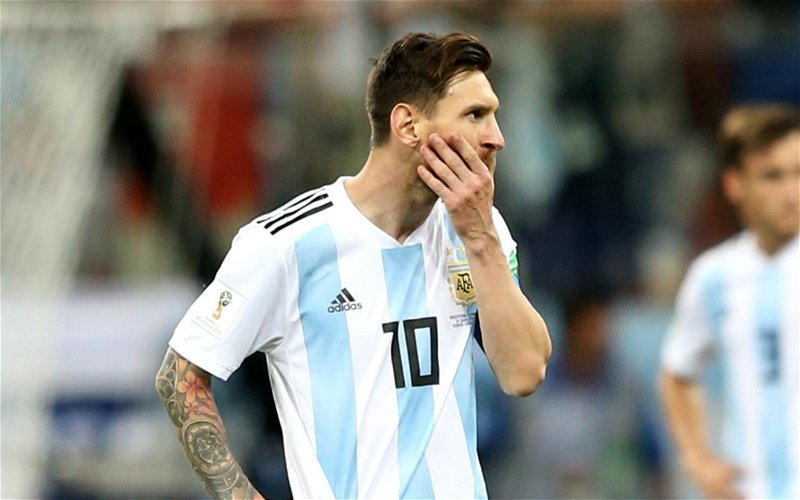 Our top scorer was a winger, Scott Sinclair, who himself had a poor season by the standards of his first. Yet we still scored plenty, and had enough about us not only to hold onto every one of our trophies, but we kept the saltire and the tricolour flying in Europe past Christmas.

This a triumph to the key element Brendan Rodgers has found in this club; our squad works as a team.

Every player does his bit.

The group is everything.

Last night, Argentina’s entire game-plan was predicated on one player. It is sort of sad to see the greatest footballer of all time brought down by something as simple as pressure. You wonder how there can be any pressure that Messi cannot stand up to, but of course there is.

The expectations of an entire country, his country. Any man might buckle.

For the sake of Argentine football, this is a problem that should have been solved a long time ago.

For the sake of Messi himself. You cannot put the hopes of a nation on the shoulders of one man and expect him to carry the weight. It’s never been done, except perhaps once … and the once, of course, is part of the problem. It was Maradona.

The memory of it haunts Argentina because it strengthens the notion that you can build an entire team around one player and make it work, although it so seldom does. You could argue that Portugal have done it with Ronaldo, something Messi must be watching, and hating, all the more because of his own situation. But Portugal will not win this World Cup as a one-man team. Too many teams will push them to the last whistle.

Great players emerge within great teams; the best example I’ve ever seen is that of Thomas Muller, who was a cog in the wheel of a German team which, in 2010, had a fantastic World Cup, winning the bronze, and came back four years later and won the cup itself, dispatching Brazil with memorable élan along the way.

But the team came first, something Joachim Low has hammered into his squads over and over again.

It’s something that has always been apparent to Brendan Rodgers.

Listen to him in any interview when he’s asked about why so and so isn’t starting or in the squad. He emphasises the point that the team comes first, that it is all important and that everything else is a secondary issue. Everyone pays homage to that idea.

There are players around whom the team can be built. Sinclair, on the top of his game, is one of them. Dembele, Rogic, Griffiths. The midfield is often said to revolve around Brown, but actually more and more players like Ntcham and McGregor are proving just as important.

It’s the same with the strikers, who he rotates on a regular basis.

But Brendan will never make a single footballer the fulcrum of this side, no matter who it is. We will never form an over-dependence on just one player. It would be damaging to the whole club project. It’s why we’ll never get caught, as Argentina did last night.