Celtic Fans Do Not Hate Logan For His Colour. They Hate Him For His Attitude. 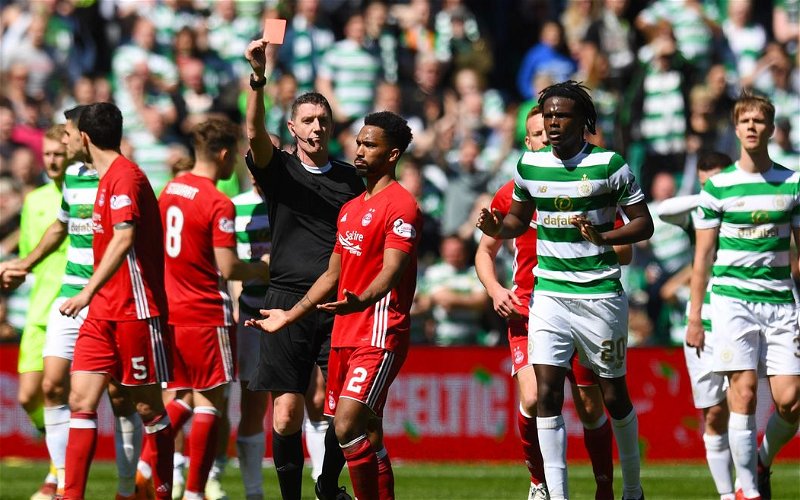 As I said earlier, Celtic fans are alleged to have racially abused Shay Logan. I do not believe his story is true. He said it during an interview with a local journalist, who prompted his reply. Logan’s willingness to slander our support is not a surprise.

He has a relationship with the Celtic support that the words “hate-hate” don’t adequately convey.

I dislike Shay Logan as much as I’ve ever disliked any player in Scotland.

He is a dirty player. He is a lout. He is a yahoo who believes his opinions are more important than they are. He thinks he’s more important than he is too. Aberdeen fans idolise him; of course they do. Starved of heroes, they wallow in mediocrity and Logan is the personification of it. So deluded is he that he compared the way they treat him to the way fans treat David Beckham. That shows you what you’re dealing with, a complete muppet.

Doubtless this halfwit believes everything he says. He once tweeted his displeasure because he was at an airport amongst Celtic supporters and none of them recognised him. That’s what he’s all about; he’s an attention seeking moron who doesn’t care how he gets it. He enjoys being in the headlines and isn’t particularly bothered why.

Without the adulation that real players get, he instead tries to inspire detestation and he has largely succeeded as far as our fans are concerned. And they do hate him, and with good reason. He gives us reasons every time our team comes up against his. But it has nothing to do with the colour of his skin; it’s about his attitude and his personality and his need to be “seen”. His need to be recognised, even if it is as a complete eejit.

Logan says he “expects” abuse from our supporters; of course he does. Yet again, he’s gone out of his way to spark controversy and to remind us of what he is and what he’s about. It’s like he can’t help himself, and I don’t think he can.

His self-absorption is so complete that he would rather be at the centre of a story like this than fade into the background like the nobody that he is.

On the day Logan made his claim, there were four coloured Celtic players on the park. Celtic fans may sing songs people regard as unsavoury, they may use less than neighbourly language about our friends across town, but only completely unhinged halfwits would use racist language when nearly half of our starting eleven were non-whites.

And I don’t believe it happened.

Logan was sent off that day for his reprehensible baiting of our supporters, and I daresay that he got buckets of abuse poured on him for the way he behaved. He also got the red card, and so our fans were treated to the sight of his moaning and whingeing as he left the pitch. He’s probably spent the whole summer moaning and whingeing but outside of the football nobody cares what he thinks. Today someone handed him a megaphone and he screamed his fury into it.

He said he didn’t deserve the red card, as if standing in front of our fans and giving them it tight doesn’t merit that; Neil Lennon did the same to Sevco fans at Ibrox and got the same punishment.

Celtic fans won’t get much benefit of the doubt either.

Logan has got what he wanted; a day of headlines. Doubtless Aberdeen will put him in the chair for the next press conference and give him a chance to elaborate, which he’ll be glad to do. He will bask in. He will revel in it, as he claims he does in the article.

Nobody who suffers that sort of abuse enjoys it.

He’s not striking a blow for players of colour or bringing an awful injustice and criminal act to the attention of the world. He’s hoping for some spotlight, and that’s all. He’ll get it too. It should be all he gets. As I said after that match, Logan is a nobody trying to be a somebody and those people will get it any way they can. This is his big moment.

What a shameful thing to be remembered for.