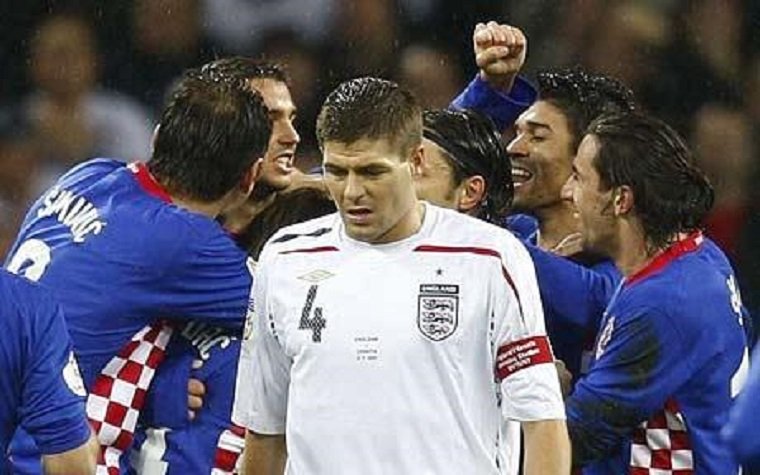 So it ended as it began, with over-confidence brimming.

With a football team and its fans telling the world how they aren’t worried about another failure because everything will be better next time around.

When I wrote my article on why I was part of the Anyone But England camp I said it was because they remind me at times so much of Sevco that it’s painful.

I just knew the end, when it came, would look like this.

I used to wonder if every mid-ranking country did what England does before a major tournament.

We see it because we’ve got no choice, so it would be easy to miss similar over-optimism if it was going on in another nation. For ourselves, we flirted with madness once, in 1978, and the experience seared our souls so we never did it again.

Way back when I thought you could support the national team without it reflecting how you felt about the SFA, I wrote an article for Famous Tartan Army Magazine about the last Scotland World Cup song ever, Del Amitri’s Don’t Come Home Too Soon.

I later interviewed Justin Currie for another magazine I was editing and he told me he wrote the song only reluctantly and decided to do it as a parable about his niece moving abroad. The SFA made him change some of the lyrics to make it more football relevant, but the flavour of the song stayed the same.

It is a song about hope against the odds, about accepting that we’d never win the damned thing but that the country would settle for the team giving a good account of itself. In the Tartan Army piece, I said it was my favourite of all the World Cup anthems because it was grounded in reality.

It wasn’t an arrogant, egotistical song. It was about who we were.

England’s notorious World Cup song is the dirge that has spent the last few weeks climbing the charts all over again. I read, and understood, about how Baddiel and Skinner felt all those years ago, hearing it for the first time, being sung by the supporters, but I also know they wrote it as a kind of ironic in-joke, never expecting it to be taken so literally.

I don’t know how they feel hearing it now; mortified, maybe. But it definitely captured the mood of England very well. They really did believe the World Cup was going to be paraded around Wembley and in front of a tearful Theresa May.

If anyone wants to know the real reason I’ve been so dead-set against any idea of them winning the damned thing these past few weeks I’m happy, now that the nightmare has passed, to share my real darkest fear; that the whole thing would have been shamelessly appropriated by the likes of Jacob Rees Mogg and Nigel Farage, as an example of English exceptionalism, and proof that the cause of Brexit was right and true. I was concerned these charlatans would be able to hijack a football triumph to sweep idiotic followers along in a patriotic wave of optimism for the darkness of exiting the EU and the proof of make-a-wish-and-believe politics.

The idea was enough to make your skin crawl.

But what’s clear is that this has not been a humbling experience for them in any way, shape or form. Their response to it has been very Sevco-like. A mixture of arrogance, misplaced confidence and a lot of delusional thinking.

Roy Keane was hilariously brilliant last night in his dissection of what happened here. Indeed, he said nothing that Luka Modric hadn’t already said to the English media; that a certain presumption of victory was what hurt them the most. Croatia used it to their advantage.

It’s little different to the way so many clubs in the SPL last season motivated themselves for matches against the Ibrox club; that assumption on the part of Sevco that they only had to show up to win, and that manifested itself in so many ways last season including when their players foolishly cheered the draw against Celtic in the Scottish Cup.

Gerrard arrived at the club carrying a lot of that baggage with him already, and the mouthing off that’s been going on – that he’s allowed to go on – is already very similar in tone to the kind of nonsense we heard under McCoist, McCall, Warburton, Murty and Caixinha. People at that club cannot stop themselves, and that means it’s an environmental issue as much as it is anything else. It’s something inside the walls.

England starts every tournament with that kind of talk.

As Keane said last night, they had their way mapped to the street parties and the processions, and the only criticism I have of his comments is that they only seemed to apply to the mood before the semi-final. From the minute they beat Panama they were bouncing those ideas off the walls.

Look at the nonsense being talked over Southgate, as if he were some kind of hero for masterminding wins over them, Tunisia, Sweden and Colombia. They lost to Belgium, a fact that is neatly airbrushed out of the narrative. One commentator last night, in the heat of the moment when Croatia went in front, said it was the first time they’d been behind in the Finals. Uhuh, apart from the time against the team that already defeated you, you mean.

Sevco has this same tendency to re-write history and to over-estimate their abilities based on wins over less than stellar opposition. They are gleeful over their victory over Bury and if they win tonight the hype will go into over-drive. Like England, they are in raptures over a relatively inexperienced and underqualified manager.

Southgate’s modest success in this campaign has been somehow turned into a triumph; England has crashed out of a tournament they had a genuine chance of winning and where his ineptness was shown up in full.

What makes them most like Sevco is in this idea that a few positive results mean the Promised Land is just around the corner; they beat Panama, Tunisia, Sweden and Colombia. In six games at the Finals they lost two and won four against modest opposition and they needed penalties to beat the moderately good South American side.

Nothing that Sevco did in the last campaign should give them cause for optimism.

But for a shocking Aberdeen collapse there would have been a huge gap between second and third. And Sevco might not even have secured third but for the Pittodrie club’s inability to beat them on the second to last weekend. Fourth place was a real possibility.

Gerrard thinks some loan signings, a few additions and a lot of hype will turn things around. But what he’s really buying into is the idea of Rangers … and that’s not the club he’s in charge of. Even if he had been, that club was built on debts and the largesse of a bank.

Those days are over in the same way the club itself is.

England has somehow convinced itself that this was a superb tournament for them.

Their media was filled with hope last night that the relative youth of the team means that they will be even better – and therefore assured success – in the Euros in two years. But France will be there, Belgium will be stronger, Italy, Holland, Germany, Spain and Portugal … all will improve whether England does or not. This competition didn’t have either the Italians or Dutch in it and Brazil and Argentina crashed out without the English ever having crossed their paths.

They cannot count on their potential rivals being this weak again, or the good fortune that a second place finish gave them a relatively easy passage through the latter rounds … and that’s an imbalance FIFA ought to address before the next tournament.

The group system they run – where there are no draws, just a pre-set map – is farcical; for days the English media debated on the merits of losing to the Belgians and although they were well beat that night the path for teams to throw matches in a scenario like that is wide open.

In the aftermath of the England defeat, their fans fought pitched battles with each other in various towns and cities across the country. Sevco fans will disintegrate when the crash comes, but they are as likely to turn their attention on the world around them as on each other, but their board will definitely get it in the neck.

England has a tradition of shedding the blood of its bosses after defeats in major tournaments.

Inexplicably, Southgate appears to have escaped criticism. No-one should be foolish enough to believe that state of affairs will last. There will be an inquest before long and whilst Southgate doesn’t have to worry about being shot at dawn – not yet anyway – time is a luxury Gerrard is not going to be given and which his club cannot afford. They, too, are used to executing for failure and he should not think he’ll be spared that grisly fate.