Lafferty And Others Can Laugh It Up For Now But It’ll Take More Than Talk To Stop Celtic. 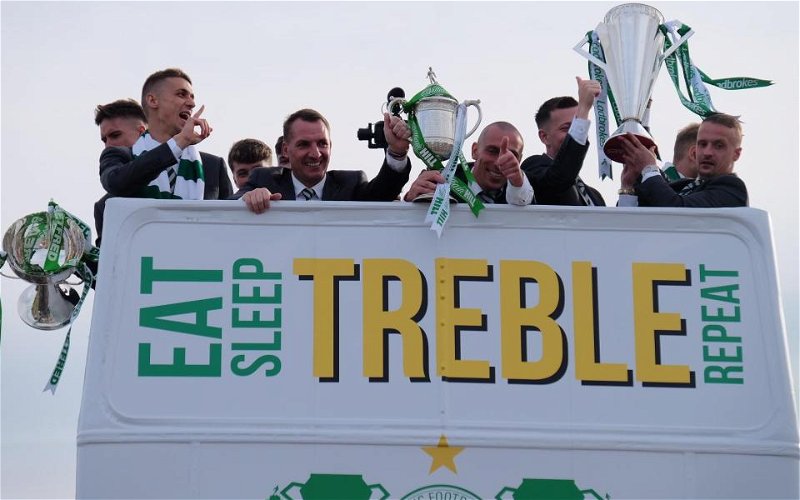 Kyle Lafferty is Tweeting that Celtic fans should enjoy the fun whilst they can because everything is changing in Scottish football. I assume he doesn’t mean that his Hearts team which has signed an entire playing squad are coming for us. He means Sevco.

He means Gerrard. I think it’s a matter of time before he ends up playing for them.

Lafferty is not alone in letting his mouth get away from him. Other players all across Scotland are coming out with this kind of talk, as they do every single season. We are “the team to beat” and everyone wants to come and take points off us. Nothing new there, and the fact we’ve won six trophies on the bounce only makes them more determined.

It ought to make them humbler. It ought to make them behave more professionally. This is an exceptional Celtic squad here and it will be stronger before the window shuts. It was already going to take a minor miracle for someone to end our quest for eight in a row; with additions expected, and big ones at that, it will take a lot more.

Certainly, it will take more than talk and right now talk is all most people have got. There has been no game-changing signing anywhere that leads me to believe that we’re in peril. Derek Johnstone might think it’s the best Ibrox side in a decade – a ludicrous statement to make – and the excitement quotient might be through the roof amongst their fans but nothing I’ve seen is keeping me up late at night. All this is hype, and nothing more.

I expect Celtic to secure a minimum of 90 points this season – the equivalent of winning 30 games. That would be enough to win the title with room to spare. To be blunt, I don’t think there’s a single team who can stop us when we’re on our game and last season’s injury crisis, which at one point had fourteen players on the side-lines, won’t be repeated. The turgid home form will not be repeated. We’re going to sweep all opposition away.

And I can write that with confidence, because our squad hasn’t broken up and it’s not going to. The additions will make us stronger than ever … and there’s the strength that comes from having a settled squad in the first place. Other clubs try to build a new one every season and wonder why their form is all over the place.

Lafferty is at such a club. He may be headed to join another.

I will worry when that stops happening. I will worry when one of our so-called rivals decides to consolidate and build instead of ripping up the team-sheet and starting again every year. Until then it’s just talk and talk doesn’t win titles.