Dedryck Boyata Is Finished At Celtic Park, Whatever Brendan’s Saying In Public. 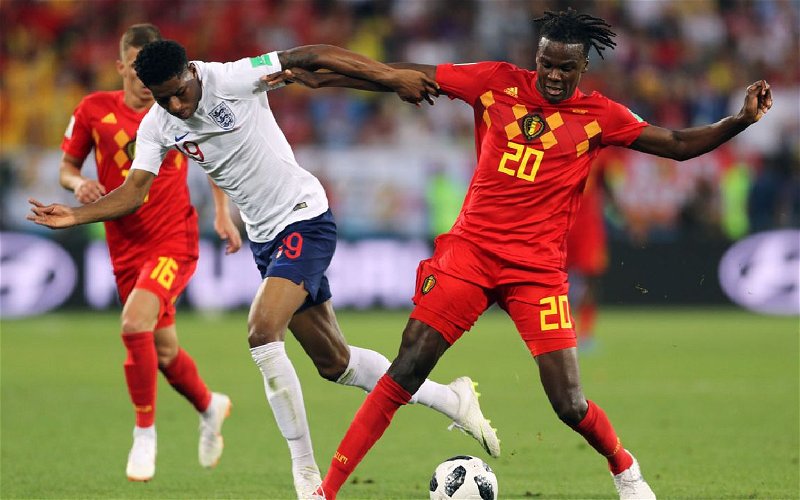 The story of the weekend was Dedryck Boyata. It’s a news cycle more than he’s due, more than he deserves. Brendan and Chris Davies have held out an olive branch for him, and offered him “a way back.” In public, anyway.

But nothing could be more detrimental to a club’s hopes of getting a good fee for a player than the idea that said player is a malcontent or lacks heart and commitment. That’s why stories like those were put out there in the first place; everyone involved knows this is over though. Everyone involved knows he’s done.

I’ve seen enough from the Celtic fans to know that Brendan is partly right and partly wrong when he says that we are a forgiving bunch and will give Boyata the benefit of the doubt.

He’s right that we are warm hearted and compassionate fans; he is wrong to think that makes us sentimental mugs.

He is right to think we’ll forgive a player who acts out as a one-off, but he’s wrong to think there’s any redemption for one who downs tools when we needed him the most.

Only the signing of a new deal is going to change that and I do not believe that’s being considered by club or player.

Even then I believe it would be hard for our fans to stomach.

His absence in Athens was a contributing factor in costing us a huge sum of money. The idea of rewarding him with a bumper new deal is an insult to the management, the players – and especially those who would have run through a wall to play that night – and the supporters who stump up for tickets for big games and now have to watch our club in Europe’s second tier.

I may be wrong. If I am then the forgiveness and repentance talk can be taken seriously, although even then there’s a long way to go.

If Boyata is going to sit and run down his contract and cost us even more money, then there’s no point to even considering the issue; it’s adding insult to injury. Only two things will move this on; he either stays for the long term, and demonstrates to us just how much he’s willing to fight and die for the cause, or he goes and lets us bring in some cash to buy his replacement. That won’t cost as much as many seem to think, least of all the player and his lunatic agent who I hope we never have dealings with again.

To be brutally honest, I do not know a single fan who wants Boyata here when this window shuts. Not one. The majority believed, even before the present drama, that the kind of money on offer for him would have been too good to turn down even if he was sitting with five years of his deal left.

The risks to putting Boyata back into the team are almost too many to count; for a start, there are players in our squad who probably believe they deserve the trust of the manager and a place in the team and who will rightly be appalled at seeing their place go to a guy who has let us down so diabolically.

It doesn’t matter what you think of their own form; these are the guys who will put themselves in harm’s way for the shirt and they will be frustrated at best if that is overlooked to hand a starting berth to this guy.

As much as many fans will maintain a stoic silence when Boyata’s name is read out on a team-sheet there are others who will be eminently vocal in making their feelings absolutely clear. There are some who will refuse to cheer him at the moment if he has an exceptional game. Downgrade that to a great game and the number of unhappy fans will grow. Boyata has had very few great games in his Celtic career. At merely passable the grumbling will be audible. The first time he makes a mistake, the booing will be. If it’s a costly error like the one at Ibrox, forget it. He will have no friends left in the stands.

At some point, the manager’s own judgement would have to be called into question if Boyata was playing in the side, costing us goals and running his deal down all the while. Is Brendan Rodgers going to risk his reputation on a man who deserted him, his team-mates, the fans and the club at the worst possible time?

I very much doubt it. It is impossible to see how we come back from this short of him signing a contract and giving a grovelling press conference where he sacks his agent and pleads for forgiveness. None of that is going to happen here.

And nor should it.

Dedryck Boyata showed us no loyalty when the chips were down. He shows no signs of giving us the respect and consideration we deserve right now. Yes, it was abysmal how the media door-stepped him the other day but my sympathy does not extend to offering him a handshake and drinks around the campfire. Celtic deserved better. There are some things no relationship comes back from, and this is one of them.

Dedryck Boyata cannot pull on a Celtic jersey until the issue of his future is resolved. Everyone involved knows this, and so talk of contrition and forgiveness and his having a place in the squad is just that; it’s talk. It’s designed to make him sound like a professional, like someone eager to get onto the pitch and battle for the jersey, and to make it sound as if we trust him to.

Few of us believes either of those things, so I have to conclude it’s about attracting the big offer that let’s us ship him out the door as fast as we possibly can.