Last night, as I was doing my final pieces of reading for today’s articles, I caught sight of a few separate folk talking about how Gerrard is trying to instil and “us versus them” attitude in his team. This is an old-school crap management technique which is so out of date the copyright on it has expired. Good managers don’t have to fill their player’s heads with nonsense like that. They give them belief. They talk to them about tactics.

One of the articles – Mark Wilson’s in The Daily Mail – asked if it wasn’t perhaps a form of genius. He used the example of Alex Ferguson, who Wilson thought did the same thing at Aberdeen and at Manchester United. Maybe he did, but he was also a managerial genius who made good players into great ones. Gerrard has replaced an entire team, which strongly suggests that he lacks that particular, and vital, management skill and knows it.

Besides, the idea that Ferguson did that has always been a bunch of overblown nonsense. He was as wide as the Clyde, was Ferguson, and most of that was just public posturing to put pressure on refs and get inside the head of rival bosses on those occasions when decisions did go the club’s way. He was a master at psychological warfare, and Gerrard, to put it bluntly, lacks the sophistication or even the basic intelligence to wage it effectively.

No, what you see with Gerrard is what you get; pig ignorance, stone stupidity and the arrogance to simply say whatever pops into his head at any given time.

Yet even if he were of a mind to do something with an ounce of strategic intent, Gerrard is still acting like somebody who is utterly thick, and in this case his behaviour could even prove to be dangerous. Because he’s at the wrong club for dabbling in those dark arts, not realising (or more likely just not caring) what the consequences of that might be.

Because the mind-set some in the media are trying to credit him with pushing on his players has existed at Ibrox for years now and it long since mutated into an aggressive form. It has festered like an open sore until it oozes poison. Gerrard is not building a siege mentality at Sevco; he is feeding a hate mentality.

He is stoking raging paranoia and a sense of grievance which, just in the past week, has manifested itself in two running battles in the streets, a couple of stabbings and a hail of missiles at Aberdeen players and fans.

This was the very worst possible time for him to wave the Victim Card, coming as it does at a time when their supporters are lashing out at the world. It is grossly irresponsible, and the media ought to be pointing that out to him instead of letting him hide behind such tired nonsense.

It is dangerous to him, to the club and to Scottish football as a whole.

Frankly, Sevco needs a greater sense of injustice like Fred and Rosemary West needed a couple of extra kids.

The SFA would be doing him – and the rest of us – a service if this cited him for those remarks.

Yesterday’s article featured a tweet from Graham Spiers; here’s an even better one. 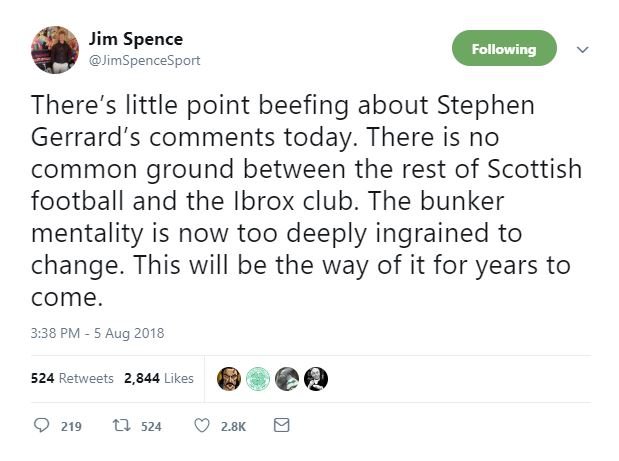 Sevco is in a dire place right now, a club so disconnected from the rest of our game – and thank you to Jim Spence for pointing that out so brilliantly – and roiling in its own muck and vomit that you cannot even imagine a time when they will snap out of it and embrace the real world again.

“The way of it for years to come.”

That about sums it up.

If you don’t already know how bad it is over there, read some their fan sites, and sample a level of delusional thinking and manifestations of hatred that will take your breath away. And as bad as those attitudes are, sentiments every bit as ludicrous and warped as just as prevalent inside the club itself, from the boot-room to the boardroom, as a variety of incendiary and deranged press releases in the last couple of years can clearly attest to.

The press is not doing Gerrard any favours in pushing this “siege mentality” stuff though. Instead of trying to rationalise his comments they should be trying to talk some sense into him. But as I said last night, perhaps he’s past that point already. Perhaps he always was.