If Reports Today Are True, Our Next Signing From City Looks Like A No Brainer. 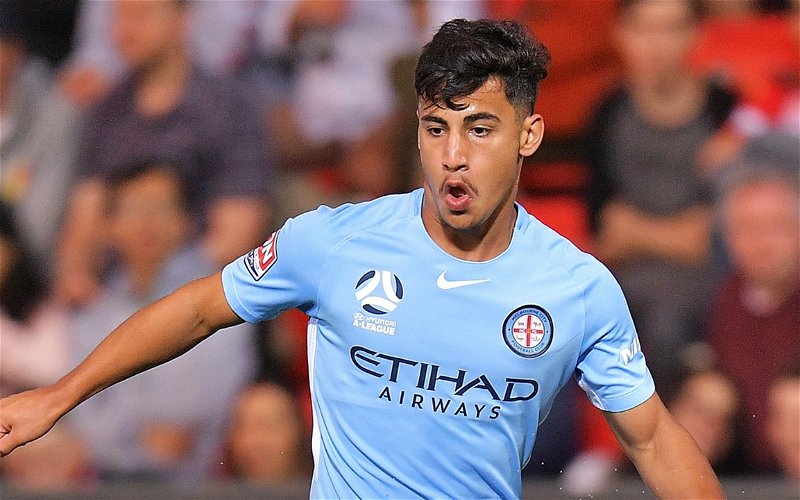 Today there was an interesting article on a Manchester City fan website, which I simply had to take up and write about. It concerns their coming signing, the young kid Daniel Arzani. The story – from City Watch, but which is believed to have originated over in Australia – says that the move to Parkhead, on loan, will likely be done, but that agreement still has to be reached over a certain figure that will form part of the deal.

That figure will be the buy-out clause in the contract; in other words, Celtic wants to take this kid on a two-year loan with an option to sign him permanently at the end. There will be a window at the end of year one where both parties will assess the situation, but the deal looks set to go through with Celtic able to take the kid if we like what we see. City seems amendable to this, as long as the price is right, because for them it’s a no-lose deal.

Because of this clause, I believe it’s a no-lose deal too.

I was pleased when I read that the plan involved taking the kid for an extended period of time; it ties in with what I heard we wanted from the proposed deal involving Liverpool’s youngster Harry Wilson, and which was the stumbling block for the Anfield club. Celtic believes that developing a player takes longer than 12 months, and we were not going to commit to giving him first team football on a regular basis until we were satisfied he earned it.

This will be structured in a similar way. Even then I would have been against it because we’d essentially have been handing City back a top class player at the end and getting nothing in return. This way that concern is elevated and it just makes good sense. The “try-before-you-buy” option has already been used to excellent effect in the deal for Odsonne Edouard, and Celtic has made it clear they are willing to pay big money if the right talent comes along.

There’s clearly a view that Arzani could be that sort of player.

City Watch seems quite sanguine about the prospect of this. He’s not being bought as a first team player, only for what they term as a “for profit” signing. That’s the business model over there now, as I said in the latest Roberts piece. In its way it’s not terribly different from our development policy except that players can go through City’s system without ever once pulling on the jersey for the first team; it’s the way things work at the super-clubs now.

We are obviously exploiting our Manchester City link to the full now, and that’s all good. Because they do have the ability to go and find and sign young players we cannot get to. They do have the draw that makes it possible to reach beyond the present horizon. Footballers who do not realise that Celtic itself is a huge club will learn that soon enough, and if City is a potential gateway to getting them here than that’s something we should welcome.

All in all, this one looks like a no-brainer.

Although not the first-team ready player we are crying out for right now, the kid has skills and potential and over two years we can check him out and then make a decision.

It’s good business all round.