If You Think The Last Week Involving Sevco Has Been Horrible, Wait A While. It’ll Get Worse.

The stench of paranoia emanating from Ibrox is growing and is now overshadowing even their own jocular attempts on and off the pitch. It has gotten to the point where even their traditional apologists in the mainstream media are worried by it. 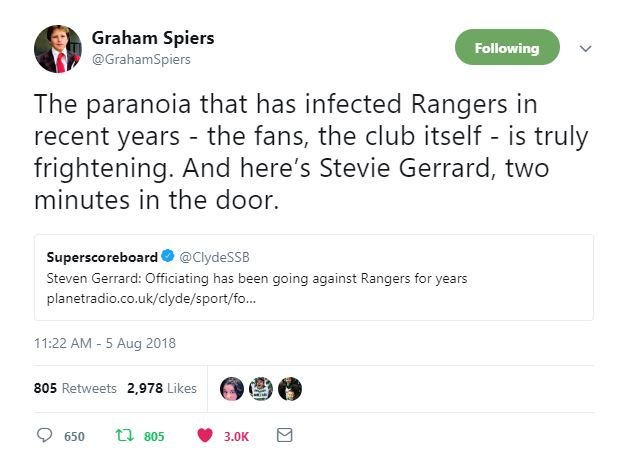 Graham Spiers has said what we have been saying for years.

When Gerrard made that statement yesterday it was immediately defended by some as just frustration at losing the three points, in a game that they should have won, but this is utter nonsense. It was a marker to try and ensure that any defeat and inevitable embarrassment can be blamed on others, the same as the recent violence and their financial mess.

And now their idiot manager is in on it.

Imagine if Tommy Burns, Gordon Strachan, Neil Lennon or even the current manager said anything remotely like that after a game? There would be questions about being charged for questioning integrity, and they and we would be slaughtered.

What would also have happened is we would be blamed for not getting the points, we would be told that we were the better team and we threw it away, like we were told in the semi final against ICT, and which arguably cost Ronny a treble.

Never mind that we were clearly cheated that day and then lost a man to a red card – we should have been better than that and beaten 11 professional footballers and a referee anyway.

What has also not been mentioned, as it doesn’t suit the agenda, is that Aberdeen were denied a stonewall penalty in the match; I haven’t seen that mentioned once, it wasn’t even on Sportscene highlights last night. Sevco’s penalty was also pretty soft, and it is disgraceful that we’re focussed on one decision when there were a number of suspect ones in the match.

But it is further proof of how SMSM media are assisting this disgraceful club and it’s supporters, always ready to provide them with excuses. After James wrote the other day about how the media constantly seeks to palm the blame for their actions on someone else, a member of their support threw a glass bottle into the Aberdeen fans yesterday, narrowly missing a kid. Aberdeen players were pelted with coins.

Was this Wigan fans? Or Chelsea supporters? Or even Celtic fans, infiltrating the ground? No, it was what last weekend was, what Thursday night was, the Peepul at their worst.

Some of the media believes this rag-bag lot will challenge us. One, Big Fat Derek Johnstone, actually thinks they will the title. We know his allegiance, we know he is a bigot (any view based on being better than others is bigoted; no one is saying he is a sectarian bigot, as I have no proof of that) but his stupidity has leapt a whole new level if he believes that a rookie manager whose club are in severe debt with second rate players will beat us in the league.

But that belief stems from the premise “we are Rangers” (which they are not) and thus are entitled to success. Entitled. It’s not something that has to be earned.

Follow it up with Alex Rae over the weekend who was utterly incredulous when Mark Guidi stated that he thought that we would win the title by a distance and Hearts would be in second, and Charlie Adam, who was so offensive Willie Miller finally snapped.

But what none of their apologists can deny is the truth of the league table; they are already behind us, and they meet us in four weeks. Yes, just four weeks; imagine what it will be like if we go into that game already a few points clear?

If you think this week has been heavy, wait until then.

Their fans, their board, their manager and the press making excuses for them … it’s all going to get worse.

David Campbell is furious at Gerrard’s first weekend comments … and very keen for the match where we stuff his team.