Remember when I said, recently, that I wanted to write an article on how an internet rumour which starts on the blogs spreads like wildfire and ends up all over the net, including the mainstream press? This won’t be that article, but it’s a nice case in point.

It’s a nice reminder of why such an article is due and why it’s important.

A selection of publications – mainstream media ones – has run with a story alleging that Brendan Rodgers has tried to get Moussa Dembele to leave Celtic Park three times, including twice during the winter months. The story is obviously absolute garbage, as both West Brom and Brighton denied making an offer at the time and there was no more truth to the “Dembele to China” story as there was in those touting Morelos for the same move.

Which is to say nothing for the suggestion that Rodgers told Dembele that Brighton was a bigger club than Celtic (yes, that’s part of the allegation) or that we were in no better a position to replace him during that window than we are in this one.

The story is as clear-cut a “package of bollocks” as you are ever going to find, with more holes in it than Swiss Cheese.

There are no “sources” in it. It is a clickbait rumour from a website called Get French Football News; if I had no imagination at all and I was trying to come up with a name for such a site I might call it something very similar.

I never urge people to send these sites traffic and I won’t do that here.

Instead, I’ll post a screengrab and let you decide for yourself how much credence to give it.

It looks exactly as you would expect a site to look if some guy had designed it in his own bedroom. 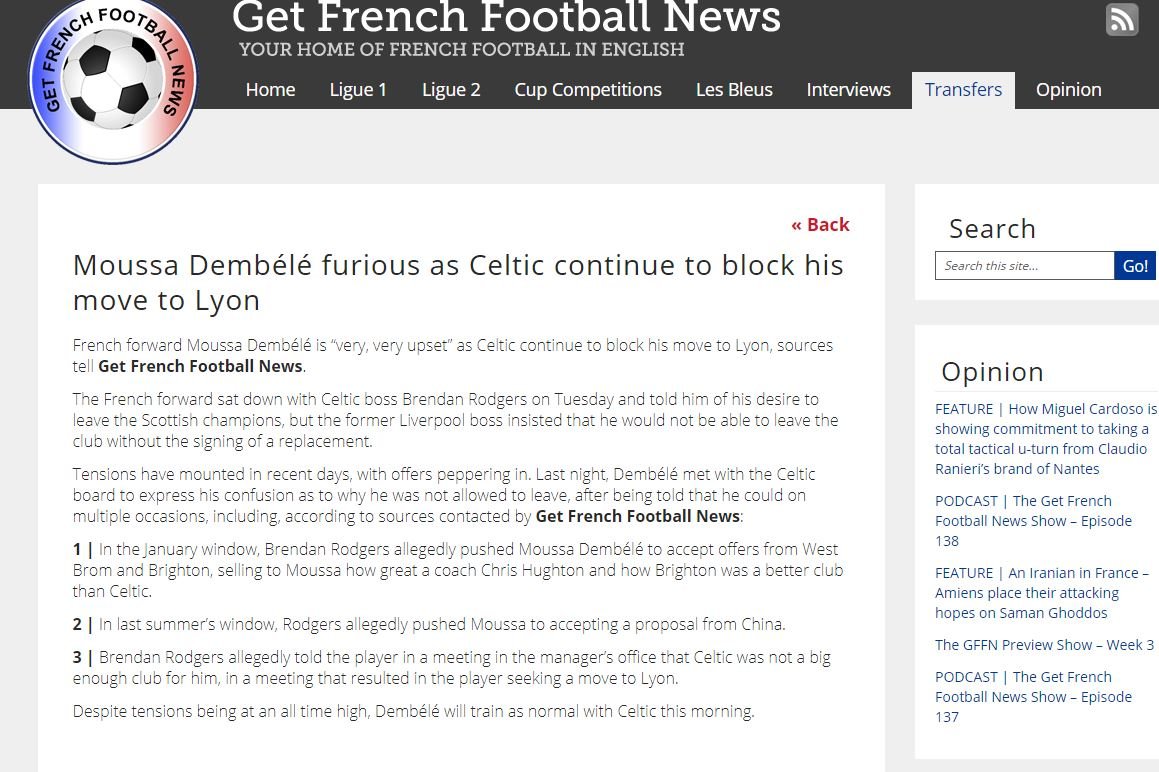 It will never be mistaken for a section of the Sky Sports News site.

And this story leaped around online last night – Dembele himself actually “liked” it on Twitter, which goes to show how far his head is up his backside and how determined he is to smear Celtic. From there it jumped onto a mainstream French football site and is now getting sent around Celtic cyberspace as “proof” that our club is venal and corrupt.

I mean for God’s sake.

Give it sixty seconds of thought, eah?

Considerations such as the wellbeing of our club were never going to come into play for the Scottish hacks; some of them are reproducing this toilet paper level dreck with relish and glee. I have no words that adequately express my contempt for them or for those who continue to give credence to some of this nonsense.