The Police Seem To Have Already Cleared Themselves Over Sunday’s Celtic Park Crush. 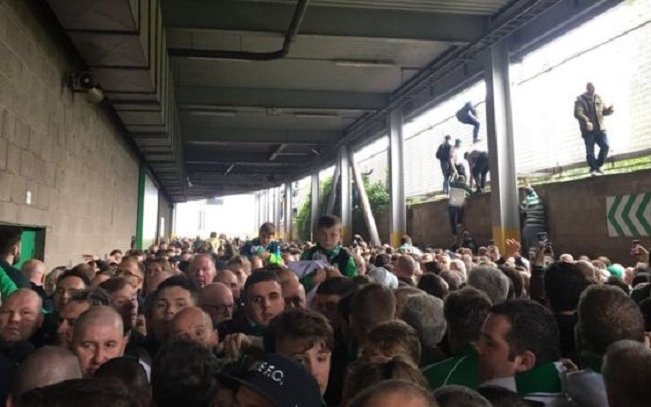 Investigations into serious incidents, incidents where the lives of members of the public have been endangered, generally take time. They have to. The last thing you want is someone doing a rush-job and facts not being properly established.

Thank God for Police Scotland; not for them any messing about or failing to bring closure to a situation swiftly. Who needs a full investigation, after all, when they can do an ask-around that gets to the bottom of things in record time.

It took less than half a week. Incredible.

The end result is that nobody was to blame.

The police did their jobs.

The stewards did their jobs.

In fact, both organisations performed so brilliantly that a serious incident did not become a deadly incident. And everyone deserves a big pat on the back for that, a moment of self-congratulation, before the show moves on.

This is, in fact, everything I feared yesterday and worse; they’ve either established what happened and “dealt with it internally” or they haven’t and now have no intention of trying to find out. They talk about not wanting to compromise public safety but someone did, and we’re wholly entitled to know which of the agencies it was.

“In realising that the area was becoming overcrowded, officers and stewards acted quickly to stop further people entering Janefield Street, which was in line with our tried and tested plans for this type of situation,” their statement said. In years of watching games at Celtic Park nothing like this has ever happened before, so what caused it? They are less concerned with that, as you’ll see, than with praising their own performances. “Had it not been for their actions there could have been a far more serious outcome and I am grateful to them for the professional manner in which they responded.”

Can anything that looks so much like mutual arse covering be anything else?

Perhaps we’re just paranoid, but people were put in danger here and we deserve better than that kind of glib answer.

The statement ends with; “We will continue to work with Celtic FC and with the supporters to learn from Sunday and to improve future policing and stewarding operations.”

How can you “learn” from something until you’ve established what happened? Nobody should be talking about future policing and stewarding operations until we know exactly how people’s safety was endangered during this one.

The haste to get past this is almost indecent; they are brushing this incident aside as if it was nothing.

Our club owes the fans answers on this, and better answers than we’ve had tonight.

This already reeks of fresh paint.

It’s as if they’ve already got the whitewash out and are slapping it all over everything.

You can discuss this and today’s events with the SFA and all the other stories by signing up at the Celtic Noise forum at the link below. This site is one of the three that has pushed for the forum and we urge all this blog’s readers to join it.