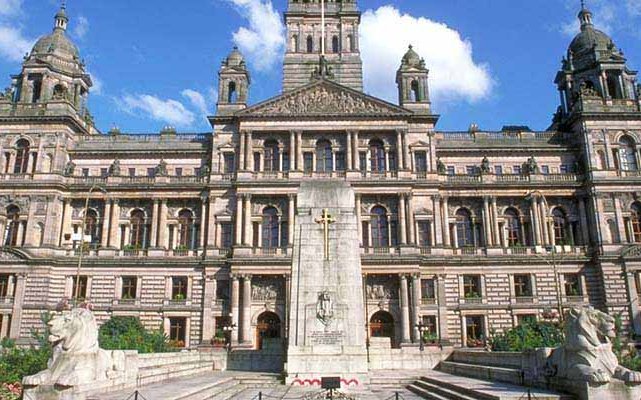 Today I listened to a truly mind-bending discussion between Gary Ralston of The Record and their Sevconite Record blogger Johnny McFarlane. The subject was the Sevco fan-zone and their alleged plans for what they call their “150 year celebration.”

Amazing that they are discussing something that’s still 144 years away, but okay …

Those plans are centred around the year 2022, and we’ll get to that in a moment.

But mark my words, the comments from Ralston were not only bitter and ignorant but they were also paranoid and even dangerous. He is pushing the myth that Glasgow City Council has an anti-Sevco cabal in it, and that this cabal has “undue influence” on issues involving them.

He called the events surrounding the fan-zone issue “murky” and hinted at something dark going on.

These are scandalous comments, absolutely scandalous. Glasgow City Council and the organisation Glasgow Life had very clear, publicly stated, reasons for refusing to grant Sevco permission for their fan-zone and these reasons make sense to every sentient person.

It’s council land, funded by tax-payer money for a public purpose, which the club has been trying to use for free for starters. There was an implicit assumption on Sevco’s part that the land would be available to them all the time, for as long as they liked. This was not the case.

As Glasgow City Council itself said, the use of land designated for the wellness of the city’s citizens being used to sell burgers and booze – and to no benefit for the taxpayer – was not on.

But the whiff of conspiracy now lies over those decisions, cast there in part by the club, partly by the media and useful idiots like Ralston and Chris Jack, and in part by politicians of the Labour and Tory stripes who are entirely without scruples of any kind.

I’m not getting into all that here, but their blatant playing of the sectarian card is typical of some of them. These are people who have been playing that card all their professional lives. For decades the SNP was “anti-Catholic” in their book, now it’s “anti-Ibrox.” They have no shame whatsoever. I spent a long time in Glasgow politics and I know some of these people well and I know they don’t believe a word of this nonsense; it doesn’t stop them using it for their own gain.

(The SNP has done it a lot over the years as well. The sectarian card plays well in Glasgow; the political class knows it always gets coverage in the media. It’s one of the reasons I don’t involve myself in party political activity of any sort, any longer.)

We all know that Sevco’s fans believe in all this dire stuff. We suspect that Dave King doesn’t, but uses it to keep his gullible supporters onside. But the media should know better than to keep on pushing the Victim Lie as they do. It is toxic and it is leading to big trouble. And furthermore, whether they know it or not – and I think some of them do – they are being used here. They are being used by the Ibrox club to damage Celtic.

Let’s be honest; Sevco does not have the cash at present – or is it likely to have the cash in the future – for a major infrastructure project of the kind they are banging on about. Museums? Bars? It sounds an awfully lot like the Celtic Triangle project, which actually has run into some political interference, as this site has discussed before.

And I repeat; that’s what all this is about. Sevco’s alleged plans are still four years distant, and there will actually be Scottish elections – and even a UK general election – before then. To be doing the council-bashing they are doing now, is an absolute nonsense. If you assume that they don’t have the money to start these projects now then what is this noise they are making – and which the media is helping them make – really all about?

It’s about Celtic. They want to cast doubt on our own plans by having the council at sixes and sevens over the issue of whether they help our club. It is a shameless smear campaign with one function and one purpose only and the press is on board with it.

If the council passes our proposals – and they will – then Sevco will be indignant and furious beyond belief and all sorts of allegations will be levelled at the local authority, and that’s the plan here, that’s what’s beyond Sevco’s public fan-zone rant and the continuing pressure on the council. And now this suggestion that plans which are four years distant and unaffordable might be resisted by “undue influence” with a Celtic slant.

They have no shame, this lot. None whatsoever.

The Rumour Guy | 9 hours ago