Today Kris Boyd Drew Attention To All His Most Negative Traits. What A Clown He Is. 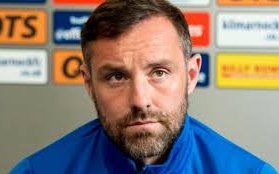 There was an article I missed late last week, and I apologise to the moderators of our Facebook group, who drew my attention to it only for it to fall right out of my head, as though I were a scarecrow and the story was sawdust, leaking through and slipping away.

It was about an email they read out on Radio Scotland where Boyd called Aberdeen fans “the sheep” in a ridiculous rant which everyone in the studio seemed to find funny.

This has been an ugly week for the game. Coins, attacks on players, sectarian abuse.

The atmosphere around Scottish football is vile right now.

Lennon drew criticism in some quarters for “goading” the Hearts fans; I have yet to read a word about Boyd’s bitter comments. I wonder whether the media will comment on his deplorable showing today after he scored a first half penalty for Kilmarnock, and which he directed against the Aberdeen fans.

His dance in front of them was pointedly inflammatory, utterly childish and puerile.

The guy lacks even the most basic class.

He hates the Aberdeen supporters and makes every effort to annoy and aggravate them in print, on the radio, on TV and in person. But in a seven day period when so much focus has been put on the behaviour of supporters, I cannot believe he behaved so recklessly and that he was not booked for it.

As Boyd’s stupid comments in that crayon column of his have garnered him increased media attention, he has become increasingly deranged and full of his own important; his ego has inflated to the point where he has completely taken leave of his senses.

He goads the Aberdeen fans in print and then on the radio, and then does that today.

He risked inflaming exactly the sort of behaviour that the media has condemned, and I just bet that he escapes any criticism for that.

“He was responding to taunts,” is how one BBC journalist has already brushed it off.

And Lennon gets taunts – and worse – ever week, but the whole country melts down anytime he responds to them.

The double standard is diabolical.

Boyd has spent the last year stirring the soup, but that’s alright with the hacks because he’s “one of their own.” That they appear happy with that state of affairs tells you everything you need to know right away. He drags the whole of their profession down.

He is an embarrassment to it, and to them.