With The TV Deal Remember That The Hand That Feeds Us Also Keeps Us Down. 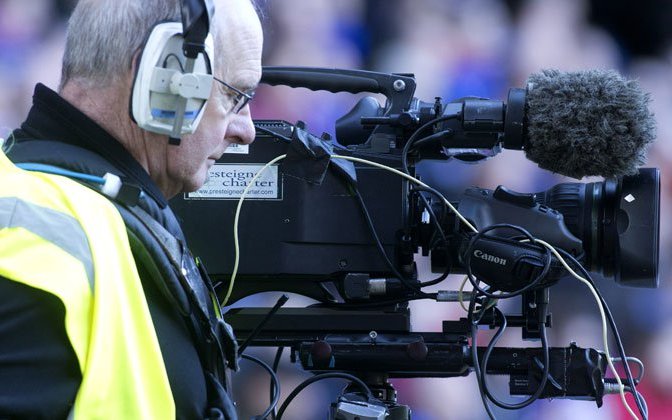 So, the deal is done.

Not the best, just the biggest financially.

Now I was writing a piece about this but James beat me to the punch. They said much the same anyway; I am not enamoured with this deal either.

There are a few reasons. But two main points.

Firstly, as James has said, Sky’s coverage of Scottish football is woeful, the pre-match and after match analysis is despicable. The only time any more than a few minutes is dedicated to it, even then with ad break galore, is when we play Sevco and it is then woefully skewed in their favour. James has discussed the individual “commentators and analysts”, he is spot on so enough said on that.

Secondly, it seems that £30m a year is the going rate. The product is worth it and anything less would have been even less inept than usual from Doncaster, so shouting from the rooftops is ridiculous and the backside licking he’s had from some people in the media who should know better is way over the top.

Our game has been disgracefully undersold and undervalued for decades, not just from outside Scotland, and by that I mean England. When you talk to fans outside England who actually watch our games, they talk it up more.

But our own administrators, media and certain clubs have devalued our product for a long, long time. Why would, or should, anyone else value our game when we have had those within denigrating it? Why have people done that with their own product?

I have always had a theory on it, and things I have learned and put together over the last few years have solidified it.

So let me take you back.

There has always been an attitude about Sottish football from down south, their arrogance about their league and their belief that they are the “Home of football” is not new.

Yes, they organised the game into Association Football certainly, in that most famous of years 1888, but they were galled at Scottish clubs and players abilities at the time.

The major arrogance goes back to the 60’s, when The Busby Babes would likely have won the European Cup had it not been for that terrible night in Feb 1958. But from there we became the first British team to win that trophy, in the same year Rangers were defeated in the Cup Winners Cup final; in a sense we took the gloss off Manchester Utd’s victory in the tournament the next year.

This stuck in the craw, and was, I think, part of the reason that Jock Stein was not knighted, whereas Matt Busby was, almost immediately. Oh yes religion and bigotry played is ugly part, but I do believe that was also part of it.

Through the 70’s and into early 80’s through Aberdeen, up to 87, when Dundee United were so unlucky against Gothenburg, Scotland always had a decent team every couple of years, a team who were at least in the running in Europe; even in 88-89 Hearts made the UEFA Cup quarter finals.

But the late 70’s into the 80’s was the golden period for English teams in Europe; Forest, Villa, Liverpool of course, but English clubs were roundly despised, due to their arrogance and, of course, their fans, the fans being prone to causing trouble everywhere they went.

Now there was one club who seemed to thrive in the 90’s; Rangers.

They say the “revolution” started at Ibrox in 1988 when David Murray bought the club from Lawrence Marlborough, but it actually started in 1986 with the signing of Graeme Souness and the banning of English clubs from European competition.

Due to this, with Souness contacts down south, he was able to bring up top drawer English players to come up here. And it was a stroke of genius to get Butcher first, given his influence, because he managed to convince others.

Being totally honest, they were top class players, but money and Europe were the carrot, not the club. In fact it was only at this point in their history that they stopped insisting that all players join the Masons and Orange Order – yes it was this late – and the reason was Souness, who played all of his career down south and whose wife was Roman Catholic, and who downright refused, with the others being bemused about the whole thing altogether.

Now most, if not all of you know all of that, so I am sure you are, at this point asking “Dave WTF, what is your point?”

Well, here it is.

David Murray and Rangers solidified their position and attempted to kill us; yes our idiot board were easy prey at that time, but after winning the double in our centenary year and the Scottish Cup a year later, we were on a very slippery slope.

Other than Aberdeen, who ran them a close second in 90-91 (a game I have said before is up for review when the truth comes out), they had no challenge as David Murray was financially doping his club with all manner of monies from God knows where.

Then in 1992-93 everything changed. The EPL was born with Sky TV broadcasting.

Now, this is where David Murray and Rangers really stepped up. Those of you who are of my own vintage will recall that there was, then, an appetite for the similar coverage of Scottish football, from fans and Sky.

Sky knew, as I have said before, that Glasgow’s big two, were a threat and a draw for the viewer, so they wanted in … oh not to promote and grow, but to keep us in our place. As I have said before, you do not neuter a threat by ignoring it, you must control and denigrate, dividing and conquering.

David Murray knew Rupert Murdoch. Murray knew everyone. Murray’s ego and arrogance wanted the European Cup, that was his Holy Grail, and he was convinced they would win that while he was there, at that time. With the banks lending money left right and centre, the thought that he would ever run out of cash would never have entered his head. His influence at BOS and RBOS was such that he saw them as a personal account.

There is plenty of anecdotal proof for what I’m about to write, so don’t think this is coming off the top of my head. I assure you, it’s true enough.

When BOS had agreed to allow us to sign Willie Falconer from Aberdeen only to, after the contract was signed, demand personal assurances from Celtic directors and then insist that they have a BOS employee on the Celtic board, it was David Murray who pushed that and it was the start of the final steps to getting BOS to call in our debts. We know now that turned out be a silver lining for us and the very early beginning of the end of David Murray.

We got wee Fergus through the door because of it, who immediately called everyone in Scottish football out. Murray included. We know the second story that Fergus asked BOS, after wiring them the funds to save us etc, for a £7m loan, that he would personally guarantee, and it was refused.

Now I may be wrong as I am not privy to the inner workings of Celtic’s banking, but I believe to this day we have never again dealt, in any meaningful way, with BOS.

What is not widely known is that Fergus McCann attempted, on more than one occasion, to meet with David Murray, because he realised that if they could market things differently then they could run Scottish football properly and fairly, while also building for the future and competing in Europe.

The Bhoys Against Bigotry campaign was another attempt to try.

Murray wouldn’t even dignify him with a response.

Murray’s attitude was about keeping his club dominant. At around that time he uttered his famous lines about “for every fiver …”

So what has this to do with Sky and TV money?

Well, Murray was utterly convinced that he could use MIM and the bank to bankroll them and that his hold on the press and Scottish football authorities was so strong that it just never occurred to him it would, or could, ever end.

What he did know was that we were still alive and a sleeping giant, he could not afford for us to open a lucrative income stream, so his influence on Sky, and Murdoch, was to ensure that our game didn’t get the credit or finance it deserved.

He used the archaic rules at the SFA, specifically through Jim Farry, to ensure that clubs, mainly ours, could not be shown on TV if the likes of East Fife were playing East Stirling in some nonsensical cup replay; it also meant football fans missed out on watching live European and International matches too.

All of this was used to drive down the value of the Scottish game.

And if you think this sounds far-fetched, don’t forget that half a dozen clubs in the league were banking with BOS and RBS at the time, and all were being squeezed to one extent or another. By who? For the purposes of what? We can guess.

What Fergus did at Celtic, putting in the foundations for one of the best financial structures of any club in the world, and continued by the current incumbents, has brought Scottish football back to a point where we are, again, getting what we are worth.

If you saw the latest profit league, nearly every club in the top flight is posting profits … there is one major exception, one club bucking the trend towards sustainability. And once again it plays out of Ibrox. Once again it is being bankrolled by God knows who or God knows how.

Sky’s relationship with Scottish football is so skewed towards Govan it borders on obscene, as can be seen in all of their reporting, specifically since 2012 when Rangers died and Sevco were born. Don’t ignore the fact that Sky had a massive influence on how that all went, and pushed the Survival Lie and the subsequent Victim Lie hard.

Sky do not really want Scottish football, they know that they need to deal with it, and specifically keep Celtic in check. Did you notice Lawwell’s comments last night, in his interview with the media, where he talked about how we are “committed to Scotland … for now”?

What keeps us here are long-term deals like the one Sky has. Without that, believe me, we’d be looking for the exit door already, and there are mechanisms we could try.

We are on the verge of becoming bigger than most of the clubs in English football, even without their TV pot of gold. We are an example of how their clubs should be run, not just by relying on huge TV money.

And if we do start bringing in more and more money from other sources, we will outshine England as much as we do Scotland.

Sky can’t have that.

The hand that feeds us is also the one that keeps us down.

Dave Campbell is a blogger and Celtic fan from Glasgow. He is deeply concerned about the TV deal.