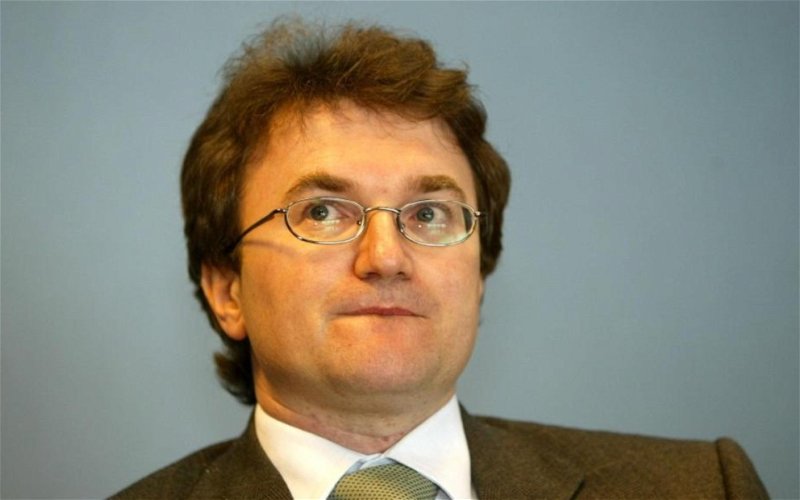 Today Roger Mitchell, the former CEO of the SPL, launched an astonishing Twitter attack on a section of the Celtic support which he complains is “obsessed” over matters at Ibrox. I am astonished that someone so intelligent can have done something so absolutely stone stupid.

He was, perhaps, the last halfway decent administrator the league clubs had … and I write that in spite of the media voices (who’s contempt for us he has spectacularly echoed today) who blame him for wrecking the Sky deal in 2002, which cost our game years and millions.

Honestly, he should know better than to indulge in such ill-judged ranting.

Where even to start? How about with his using the language of the club’s enemies?

The use of the word “obsessed” to describe us originated on the Ibrox NewCo forums, and it was promoted as nothing more than a diversion, a way of halting scrutiny of their club, the governance that has allowed it to become toxic and those in charge of it.

It will never succeed in stopping those of us who care about the game from doing what has to be done. You can call us what you like, you will not shut us up.

Let me explain to Roger Mitchell – and others, and they know who they are – exactly why Celtic supporters continue to focus on what goes on at Ibrox. This article isn’t about them, this article is about us, and why we believe these matters need to be examined.

For openers, the game in this country is aware now and has been for quite some time of the industrial scale cheating that went on at Ibrox for more years than we could count. The use of EBT’s and the non-disclosure of documents relating to them is a documented, incontrovertible fact. That no restitution has ever been made for that period – and no matter what Mitchell says that too is an incontrovertible fact – is quite disgraceful.

Celtic was the club that was most affected by what went on. That’s another incontrovertible fact, which is why the club has asked for an inquiry into all of it, an inquiry that has been denied us by the SFA. In order for people to move on, there has to be justice.

The LNS inquiry was a disgrace. Its findings taint the whole national sport.

Without justice, believe me, these matters will continue to haunt the game forevermore.

Is Mitchell’s problem that Celtic fans gloat over the pitiful flailing of the current Ibrox club? That club’s fans, its board and its players spend every waking moment planning to overhaul us. And they make that plain in every statement they make, and especially when they win. Was he out of the country for most of last week? Did he miss the ridiculous spectacle of them gloating over a temporary stay at the top of the table when we had a game in hand?

Did he miss the posturing? The gushing arrogance? All the talk about how we were under pressure and that they were coming for us?

Because, believe me, we did not miss it.

And neither, and perhaps more importantly, it seems, did Aberdeen or Dundee, who that contemptuous club viewed as merely an afterthought.

Why does Mitchell think King has pledged to keep on spending other people’s money? To catch Aberdeen? To stay in front of Hibs or Hearts? Scottish football needs FFP regulations; until it has them that club will keep on endangering itself and the rest of the game … and for what purpose? To what end? Nothing more than usurping Celtic.

Mitchell says we should be seeking “the moral high-ground.”

Against who exactly? Against a section of their fan-base which has its own obsessions, too depraved and despicable to even talk about in this article?

Against a media which twists the words of our players and our manager, which seeks to destabilise us by linking every footballer of any talent with phantom moves to England?

Against the structures of the SFA and SPFL, who do not do any governing worth the name, and who have no real oversight – the SFA keeps more of its procedures behind closed doors than the North Korean government – and where a crucial decision on the scheduling and location of a cup semi-final had Peter Lawwell sitting outside in the hall like a daft wee boy?

Against a Scottish football “establishment” which pushes the Survival Lie, that the club at Ibrox right now and Rangers are one in the same? Or which promotes the Victim Lie – the one Mitchell himself pushes in his tweets?

Excuse me for not believing they suffered enough; what happened to them, as people have pointed out repeatedly, were the consequences of their own actions and what makes the Survival Lie all the more egregious is that it is a Get Out Of Jail Free Card for all of it; yes, you stiffed creditors, cheated the sport, blackened its reputation and corrupted its structures … but a few years out of the top flight, and you keep your name, your trophies and “history”.

And you know what’s just plain wrong about that?

And they weren’t. Not even close to being true.

Which is why the consequences of “liquidation” were and are still important. Which is why the name the club goes by, and that which Celtic fans call it, remains important. Small matters they may be to some outside the game here but for someone who worked within in and knows it well, to minimise these things as mere trivialities when they are absolutely crucial, absolutely fundamental, not only to our understanding of the past but for the game’s future is unconscionable.

Mitchell is not only asking us to put the cheating and all that went with it in the rear-view mirror, but he’s asking us to blatantly deny it and its consequences by twisting the language and our own understanding of these events in order to lend legitimacy to lies.

It’s not going to happen, and he can call our fans whatever he likes.

Moral high-ground? You know what? We’re quite secure on that front, as far as these issues go. I have no problem sticking our flag up there, no problems at all.

He talks about us having our own identity, and how we should not be being defined by other people, and those are perfectly legitimate contentions.

The thing is, we don’t do that, whereas he does.

One of the criticisms he levels at us is this “no Old Firm” thing … and he’s right, it’s a phrase the majority of Celtic fans do not use and haven’t used for a decade or more … a phrase we stopped using far in advance of the death of Rangers.

But it’s one he does still use, and one which the media is determined to shoe-horn us into every chance they get.

Celtic, as a club, does not use it and nor should they.

Why? Because we are a distinct entity, and we do not want to be defined by them and we never will be again. It’s those who are stuck firmly in Scottish football’s past who cannot let go of this idea of Celtic and the Ibrox club as being “two sides of the same coin”, who cannot seem to separate them in their minds.

As to broader issues like Resolution 12 and such like, is he having a laugh? For starters, those matters are not primarily focussed on Ibrox – a fundamental misunderstanding of that particular issue which is absolutely astonishing and makes me wonder if he’s paid the slightest bit of attention to it – but on how decisions are made at Hampden.

He contends that what happened at Ibrox cannot happen again; absolute nonsense, I’m afraid except in one crucial respect which he dares not mention. Nothing meaningful has changed in the regulations which would make that true but for one thing. The next club in Scotland which gets liquidated and wants to start again will not need to start at the bottom but can assume the place in the league that was held by its predecessor.

Running up debts and dumping them overboard has been wholly legitimised by the SFA. So much for robust action to stop clubs spending their way to oblivion.

As for the rest of it; fit and proper person? Unchanged and the proof of it has his feet up on a desk in South Africa and is sniggering at the ineffectual Takeover Panel. As I’ve pointed out, Financial Fair Play rules are still non-existent and there’s no sign of that changing.

The truth is, the governance of our game is weaker than it was in 2012 and to cap it off we’ve just bound ourselves to another long-term Sky contract which, doubtless, includes another version of the notorious “four Old Firm games” clause of yesteryear.

There are people who would like it very much if Celtic fans only paid attention to their own club.

I know who those people are, and so does Roger Mitchell.

If he thinks Celtic fans should be absolutely unconcerned about the wider issues in the sport then I’m astonished to hear it. I thought he and those of a more progressive outlook would welcome fans who took an interest in these things.

Because – and I believe this even if he doesn’t – our scrutiny and our concerns for the game have benefited it in ways impossible to quantify.

And some of us do care, as he knows well. We’re not all as shallow and ignorant as others certainly wish we were.

If what he actually thinks is that we’ve gotten too loud and demanding and that we should meekly take our historical places at the back of the bus then I am appalled and outraged in equal measure, and especially as I know he has a lot of affection for Celtic.

Those days are over and you are living in the wrong century mate.