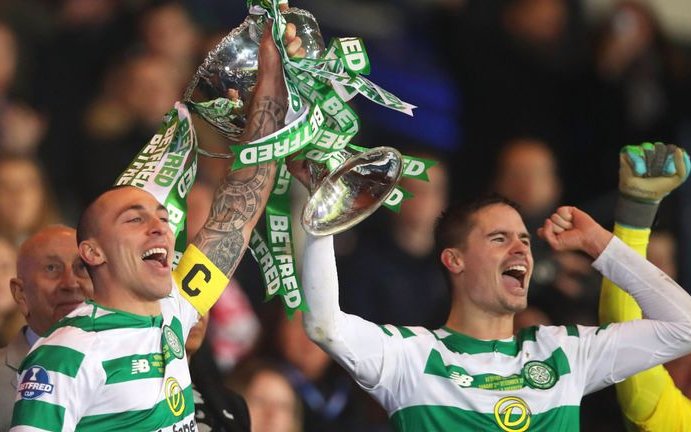 If you haven’t read Martin Hannan’s piece in The National, you should do it.

This is the link.

Check it out, and be astonished.

It also tries to strip us of credit for our success.

Apparently attendances – and what teams do in Europe – is how success and failure is defined in Scottish football, not trophies.

And that means that “the Old Firm” dominates the game … and not so much Celtic.

Oh there is so much wrong with this piece, this very, very bad piece, that you really need to start at the beginning and work your way through, and what a beginning it is.

“Celtic and Rangers’ dominance is down to attendances” reads the headline.

It gets worse when you get to the first paragraph.

“Well, so much for all that wishful thinking about Kilmarnock being able to challenge Celtic for the Premiership title …”

Which moves me to ask; who exactly was indulging in this “wishful thinking”? Certainly not Steve Clarke, the manager of Kilmarnock. He venomously attacked those who were talking about it in the strongest possible language.

So who is Hannan referring to? Himself, perhaps, or others in the media, or desperados at Ibrox who know they can’t catch us so will settle for someone else doing it.

His own article is full of examples of it, as those who read it can see.

But before those comes the apparent frustration with the strength of our team. He then writes this about the Ibrox NewCo; “They made six (changes) for yesterday’s match against Dundee and that’s why the Ibrox side is the only team that can really challenge Celtic this or any other season in the foreseeable future.”

The first bit of wishful thinking right there, and such intellectual laziness, such total disregard for every other club in the league. This persistent fixation the media has with the discredited Ibrox operation continues unabated, unfettered by the reality of their situation.

The article then gets to the point, but you have to go through a rash of stats to reach it; Parkhead and Ibrox have the biggest capacities and thus the biggest crowds. Wow. I am amazed at the media’s ability to do research. I am also amazed at their ability to continue stating the obvious. Were any of you unaware of this fact? Does it surprise you?

The article then has a suggestion for how the Ibrox club can “catch” us.

Increase the size of Ibrox.

Ha! Of course! So simple, right?

This blog has pointed out many, many times that Fergus understood that those 10,000 extra seats inside Celtic Park conferred a momentous advantage on us. The financial differential from those seats has put us far in front of them, but it’s not the only area in which we’re streets ahead.

Even if the Ibrox NewCo could manage it, it might not necessarily bridge the gap.

And that leaves the question as to how it could be done; oh Hannan has an old suggestion about filling in the corners, but he admits there’s one minor flaw with this proposal; it “will cost a lot of money.” Oh yes, indeed, and unless they have some stuffed in a mattress somewhere that’s going to be a problem of sorts. A pretty big one.

Hannan wants to look at the grand sweep of the game since Murray last looked at the idea of increasing the capacity at Ibrox; he accepts that in that time “other teams have won the Scottish Cup and Scottish League Cup” but that the power has stayed shared between two teams. It’s just a shame, for the sake of his shaky narrative, and poor grasp of the current position, that one of those clubs is now dead and gone.

In the six years since the formation of the Ibrox NewCo they have not won a major trophy. Not one. They have been in the top flight for the past two seasons and in neither of those years did they finish higher than third. Last season they came within a point of being fourth.

The Ibrox Newco at that time had the second biggest attendance in the country and the second highest wage bill … that has continued to be the case right through the years since.

Aberdeen have been second four years in a row, and were third five years back.

They are easily our biggest rival, although this season has been frankly appalling.

Beyond that, this is all Celtic.

Seven titles in a row.

Seven trophies in a row.

This absurd article takes another bizarre – but telling – turn with this paragraph;

“So are Celtic and Rangers too big for Scottish football? Of course they are, which is why success in Europe is the true measure of achievement by the big two.”

Seven titles, seven trophies in a row – these things no longer constitute achievement, it seems.

There you have it folks, our celebrations have been in vain.

It’s nice of Hannan to lay it out like that.

It’s also nice of him to lump us into the so-called “big two” when, in fact, what we have is a Giant One.

What an idiotic piece that is.

I know our success really winds some people up, but really … they are going to have do better than this weak nonsense.