If Morelos Gets Off Today, It Will Be An Outrage For Which The Media Can Partly Be Blamed. 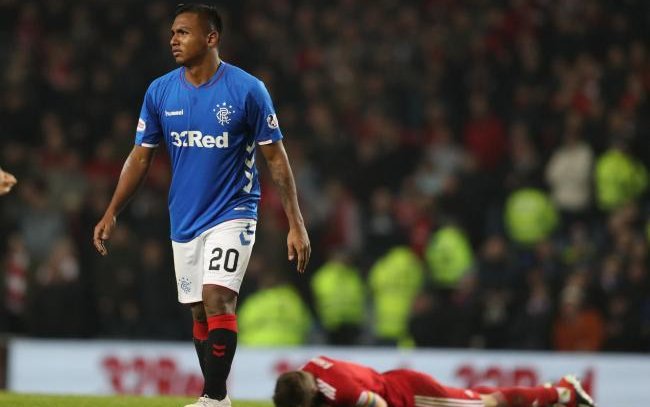 What arrant nonsense is being talked about Alfredo Morelos.

This is not, in itself, unusual. Ever since that guy scored his first goal for the Ibrox club people have been talking arrant nonsense about him. This idea that he’s worth a mammoth transfer fee is part of it, when last season a mediocre player like Boyd outscored him and he risks being outscored again in this campaign by Cosgrove of Aberdeen.

Morelos “plays on the edge” is a familiar term when the media is talking about him.

What does this mean?

It means that he is aggressive and mouthy and prone to rash behaviour. It means that he occasionally loses control. The suggestion that if he got a grip on himself that he’d be a less effective player is so prevalent in the press corps that it covers a multitude of sin.

Tell me, what other profession would allow such outrageousness? The creative arts, I guess. There, you can get away with wrecking hotel rooms, smashing guitars and, of course, if you’ve watched enough documentaries, you’ll know some get away with much, much worse.

And you know what? This idea that talent comes at a cost, that it can be destructive in some people, is absolute unadulterated bullshit. Certain people are just destructive, and it’s that simple. Some of them just happen to be talented.

And because they are, they don’t wind up paying the price for their destructiveness.

Instead people make excuses for them.

Is Morelos one of those people?

I’m not saying that, because I don’t know either way. All I know is that he’d be just the same footballer if he wasn’t so prone to kicking things that aren’t the ball, elbowing, niggling and needling his way through games. To excuse that on the grounds that it’s part of what makes him good is just bollocks.

The longer people make excuses for him, the more he’s allowed to get away with, the more he will do these things. Give some people an inch and they take a mile. Allow them one liberty and they will quickly spin out of control.

Why is Morelos more prone to red card offences this season than last?

One hack seemed to pose that question last night, when he pointed out that Morelos got a lot of yellows but no reds during the last campaign.

I would stipulate that the answer lies right there; if he had been brought to book in the right way last season, if he’d have been shown the red a lot of his petulant, arrogant, nippy performances justified, perhaps he would not have spun so spectacularly out of orbit this season.

Furthermore, had his first red card of the campaign actually stuck maybe there wouldn’t have been three more to follow.

The media clamoured to have that first rescinded. They have clamoured for him again here.

The Herald’s Graeme McGarry published a true piece of excreta last night which said that the precedent for clearing him this time had been set with that diabolical decision to grant him a reprieve for that first red card; McGarry is arguing that one scandalous verdict requires another scandalous verdict.

In effect, he thinks two wrongs make a right.

Today, at the Ibrox press conference, Gary McAllister said that the reason for Morelos getting the red card was “his reputation.” More garbage, and the press ought not to have let him away with it. The reputation is because of his behaviour. It was his behaviour that earned him the red card. That nobody in that room pointed that out is atrocious, and shows once more that too many of them bow down to the Ibrox PR machine. Too many of them are gutless worms.

By letting that line stand, by letting that go on the record, they are developing the next excuse for the next Morelos flare-up. They don’t care, because they know what they’re doing here. Some of them would happily let this player away with murder if they thought he’d score the goals that stops seven in a row turning into eight.

Morelos is the golden boy, like it or not. The media not only wants to keep him in the Sevco team and scoring goals in the here and now, but they want to promote him so that the club gets a big a fee for him as it can in the summer … and they badly need the money.

More on that later, I assure you.