Ibrox Noise’s Latest Barmy Article Is Not Just Delusional, It Is Actually Dangerous. 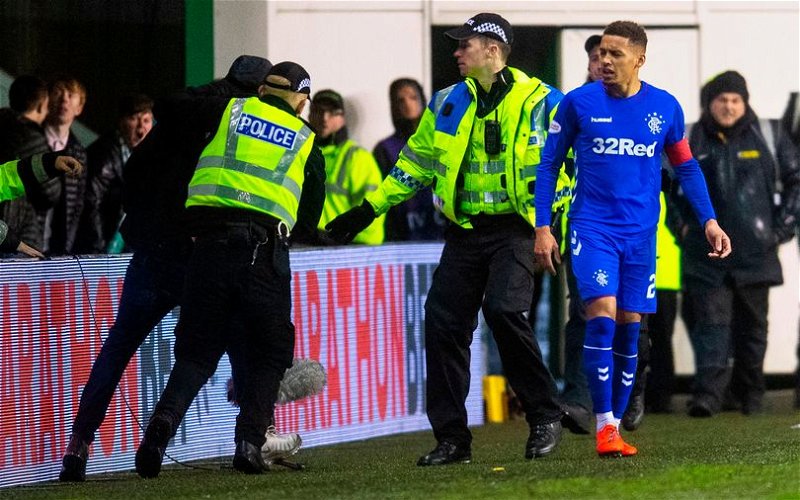 Ibrox Noise has outdone itself today with an article which suggests that the Easter Road ned who got in James Tavernier’s face was armed and had been ready to use the weapon when the police got hold of him. This is beyond belief, even for them.

Relying on TV footage to support their claim, and jumping to one Hell of a conclusion, they allege that the assailant “briefly reaches into his back pocket for something, quite probably a knife.” This goes several shades beyond mere speculation, which is sort of expected on their blog, and into dark fantasy.

It is amazing what goes on in their heads over there.

Hysterical accusations like this don’t advance our understanding of these events one bit, and they certainly don’t help in calming the atmosphere these incidents generate.

That’s already high enough. David Cottrell, the former footballer, offered his own hysterical response yesterday when he seemed to suggest that armed police should be deployed at games, presumably so they can open fire on the first over-zealous kid who leaps the barriers after a last minute winner.

Ibrox Noise has some right loonies writing for, and it always has, but this article makes such a leap out of the blue and into the black that its writers should be ashamed.

There is no logic to it other than what’s in their own demented minds, and it is not supported by the slightest shred of actual evidence and in fact is flatly contradicted by known facts.

The guy in question was arrested on the spot, carted away by police within seconds of the incident taking place.

He’s subsequently been charged, found guilty and banned from every ground in the country.

It was swift and sure, and there was no time whatsoever, not even a window lasting a single moment, for him to have disposed of any weapon he had on him … so the police would have found it and charged him with that as well had this story been true.

Honest to God, this is a bad enough situation without people making up nonsense like this. It is dangerous. It is grotequely irresponsible.

Their febrile imaginations, which usually conjure up conspiracy theories about Celtic running Scottish football, clearly don’t have enough to occupy them,

This is the kind of article that shames the whole blogosphere.