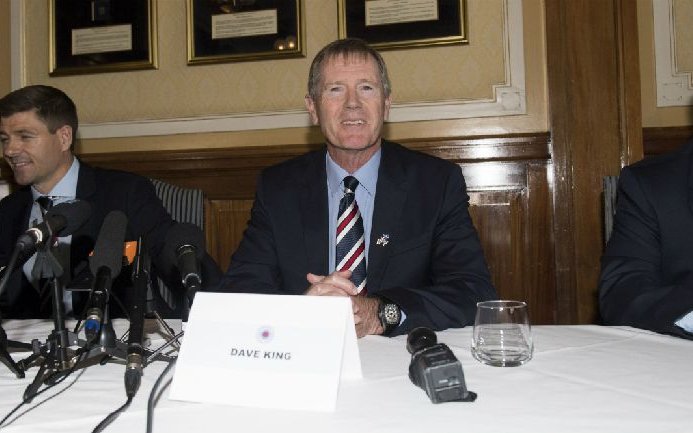 It’s the point where they start talking about money. About options for stabilising the club. About how they, the fans, can raise the necessary cash to give the manager war-chests and fighting funds and all the rest of the nonsense they fervently believe in.

Well, even as this week and its game was approaching some of them had started floating ideas. They had a lot in common with other floating things, the sort you find in the toilet if someone hasn’t flushed it properly. But that we’re even here reveals that panic is in the air.

Sevco fans are traditionally very good at denying reality. Their talent for it is such that the landscape of Orwell’s 1984 would have been entirely familiar to them. They do doublethink better than the most fanatical Inner Party member.

There is a moment in that book, as O’Brien tortures Winston, when he tells the poor bastard that the party can bend reality into whatever shape they want it. “Do you suppose it is beyond us to produce a dual system of astronomy? The stars can be near or distant, according as we need them. Do you suppose our mathematicians are unequal to that?” he asks and it sounds preposterous until you accept that he believes reality is only in the mind of the individual.

And Sevco minds are certainly up the job, if you read their forums.

There, on the grand slopes of madness, you can glimpse a world where they should get £20 million for Morelos just because we did for Dembele, and where Gerrard has “improved” things despite a win ratio that still languishes around the 50% mark.

So of course, if you scatter some magic beans into that fertile soil you will, in fact, grow magic beanstalks. This is where they currently are.

And what are these magnificent towers of stems and seeds and leaves and flowers? Nothing more than the manure they are settled with. Amongst the suggestions are a bond system – Ibrox fans did that once before and they were rendered worthless when the club died – and some form of club membership scheme. There are issues with both.

The bond scheme idea is lunacy; it’s a one-off payment which won’t raise a third of what they want. They want to pitch this to their fans at around season ticket time, and they expect their fellow supporters to be able to find both lump sums at once; honestly, it is barking. What exactly what they be getting for this money? Last time it was the right to buy a season ticket in a specific seat; Celtic guarantees the same scheme as a matter of course.

Most clubs do. The season ticket is renewable year on year. It always makes me laugh when I think of the mugs who bought Club Deck tickets with the bond all those years ago; it is especially hilarious when one thinks that none of them survived the liquidation of Rangers, in spite of the commonly held belief that they are watching the same club.

The membership scheme is equally ludicrous; they have attempted variants of this several times down through the years and none has been a success.

Let’s be blunt; Club 1872 is supposed to collect sums from fans on a regular basis to buy shares in the club. Yet their bank account has already been raided several times to finance certain aspects of the club and their shareholding faces continual dilution as King and his people use the club’s share base as a means of running up debts. It seems clear in light of it that Club 1872 is a membership scheme in all but name, and numbers involved continue to shrink.

The specific intent behind the organisations which became Club 1872 were to keep the cash aside for building fan representation; they were meant to keep their activities separate from the club, and the cash well away from the grasping hands of the football operation. The slide began when it became clear that wasn’t going to happen.

Even then, the vast majority of their fans wanted nothing to do with the idea. This is not the Ibrox way; it is certainly not the Sevco way. These people have been raised to believe that someone else would always foot the bill. They have obsessed, for yonks, over Asian billionaires and American conglomerates; the realisation has dawned, with some of them anyway, that none of that is going to happen. This is why they’ve moved towards this idea that they can amass a fortune selling their crap players for massive sums of money.

This is the final refuge of desperation though.

Celtic fans might not realise this, but I’ve been studying this matter for years and Paul Larkin has done incredible work even further back than me; Celtic fans have outspent theirs for decades. Our club was always a more viable commercial operation than theirs.

It was just that for a long time they spent more because the banks allowed it.

The more they have the more they will spend; that’s their other reality. Even if one of these schemes had the remotest prospect of success, they’d build the wage bill to monumental heights without expanding the income stream. The road ends in one place, the same place as it did last time.

It ends in the boneyard, the graveyard, the cemetery.

It’s just a shame that they don’t go through all five stages of grief; that club is forever stuck on denial.