Celtic Fans Need To Help Weed Out The Idiots In The Stands Or Sniffer Dogs Are Just The Start. 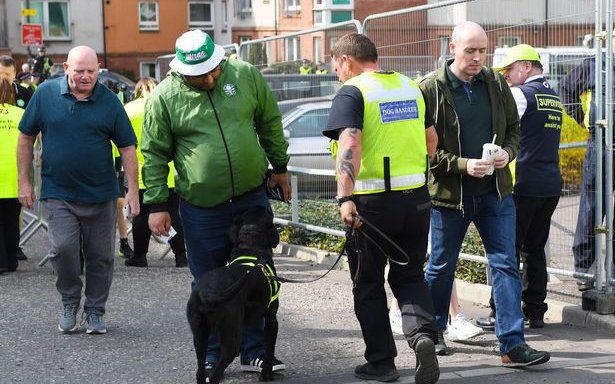 At the weekend’s game against Hibs, Celtic fans had to queue up as firework sniffing dogs were used for the first time in a while.

A series of events this season – all of which are well known – have put the onus on clubs to start sorting out problems in the stands.

Hibs are investing more in security and Ann Budge’s reaction is a breadth of fresh air; when these successful business people come into football and look around and act rather than talk, well frankly it shows the football authorities up.

Anne Budge is interesting in how she views the way the game is governed here. Remember Fergus McCann? She reminds me of him in some ways, with the way she talks about how slowly everything in the game moves. Neither could really understand the laboured and nonsensical way things “get done” in Scottish football.

If people ran their businesses the way the SFA run the game, then they would fail, very quickly.

Celtic are about to act on this, as James has pointed out.

But we as fans have a responsibility in this too.

A phrase I hear a lot when this stuff happens is that anyone who throws something or gets onto the pitch is “not a real fan of the club”; Chris Sutton used that phrase when discussing the firecracker incident at St Mirren Park.

Now while his intentions are to stress that we, the club, do not want to be associated with this scumbag behaviour and the decent fans also want to distance themselves from this person it is not quite as simple as that.

Because, of course, the perpetrator does self-define as a Celtic fan.

Whoever they were, they attended an away game. That takes membership of a supporter’s bus or group. He or she will almost certainly be a season ticket holder and, like it or not, it means they represent us as fans and we can’t just ignore the bad and take only the good, because the good behaviour doesn’t get reported, remember.

The same applies to Hibs, Hearts and every other club.

The other line you always here is that it is a “small minority of fans”; for one club and the sectarian singing that comes from its stands that is demonstrably not true; for clubs like ours it undoubtedly is. But even one fan engaging in this sort of behaviour is one fan too many.

One idiot with a bottle, a flare, a firecracker, a coin, is too many.

So we have to be at the forefront as fans and call these eejits out.

Yes I know at the time that this is difficult; you might not see an incident properly and if you do, are you really going to confront a crackpot with a weapon? But report them. After the game. Tell the club. Tell the police.

All that childish nonsense about “not grassing” … grow up. Someone who throws something at a footballer doesn’t deserve the protection of silence. These people are sociopaths and a danger to all of us … and to our club.

If the choice is Celtic being docked points, at a time when the authorities are aching to stop us winning the league, or tell someone who threw an object … how is that even a choice at all? I would tell them, and I would be happy for that to be known.

In all society the anti social people hide behind the well behaved, banking on no one getting involved.

For that to change, we have to face it or sniffer dogs at away grounds are only going to be the start of it.

Dave Campbell is a Celtic fan and blogger from Glasgow.