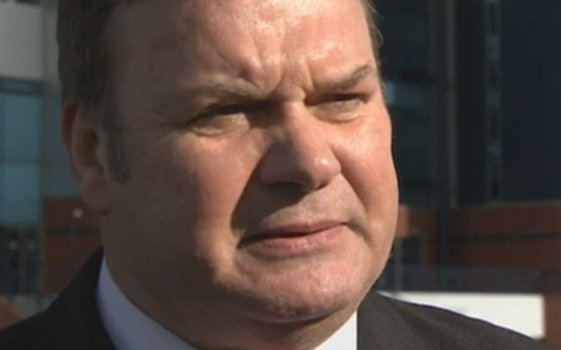 Derek Johnstone is embarrassing himself live on the air right now.

Go and have a listen if you’ve got nothing else to do. Or wait until tomorrow and download the podcast of Clyde’s phone-in show and have a listen to this. It is so cringey your hands will be hooks and your back will be arched and your face will be screwed up in a wince.

Be careful; if the wind changes, you’ll stay like that.

Honestly, I have rarely heard such incoherent nonsense from a radio anchor who wasn’t working for TalkSport. Johnstone is not exactly the brain of Britain and the idea that has ever been objective is for the birds, but tonight he has really hit heights of low.

Scott Brown is a master criminal if you believe Johnstone.

Before the match even began he knew what he was going to do. He was going to get Morelos sent off. He deliberately provoked Kent into an act of aggression that would have drawn a card in a rollerball game. He incited the Ibrox support and made Andy Halliday react.

Incredible, right? Brown is so evil. So nasty. Such a Machiavellian character. It makes me laugh, it really does. First he “started the red card” – Johnstone’s words – by raking his studs down Morelos leg. He then provoked the incident with Kent by saying nasty words to him. Halliday was driven past the point of sanity by Brown’s taunting of the Ibrox supporters.

Johnstone believes all this, of course. All of it.

Yet Brown’s plan is so deep and complex and extraordinary that it depends on one thing; it depends on everyone involved acting exactly as he planned for them to. And if even one of them had acted like a professional instead of a yob in a pub brawl the whole dastardly scheme would have fallen down on its arse.

Is Brown good, or is he just lucky?

Brown is not just good, if you believe Johnstone; he’s the German Von Clausewitz, the Florentine genius and the Chinese strategist Sun Tzu all rolled into one.

Not only does he know what he’s going to do but he has cunningly manipulated those around him into playing his game … why isn’t Brown in politics or working for military intelligence or something? He clearly should be.

It is amazing to me that Johnstone can talk such nonsense without seeing the holes and the flaws in it.

Clyde ought to unplug his microphone. He sounds like a clown.