McNeill’s Magnificent Moment In Lisbon Is The Ultimate Image Of The Man And His Glorious Team. 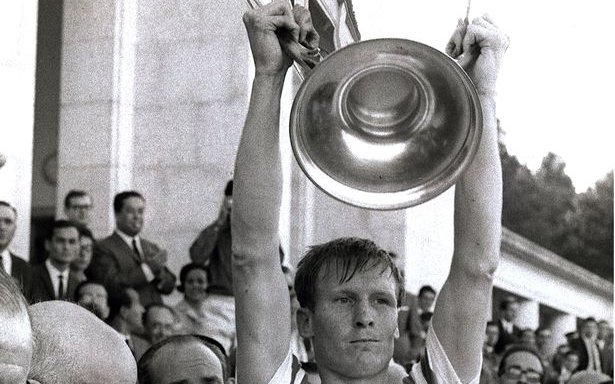 The most iconic image from Celtic’s history is a man standing alone on a Lisbon platform, showing off to the world his own Holy Grail.

It is a vision burned into the soul of every Celtic supporter, the encapsulation of a triumph where immortality was achieved.

That famous moment almost did not take place.

The jubilant crowds that streamed onto the grass of the Estadio Nacional made movement for the players nearly impossible.

Somehow the Portuguese police managed to extract Billy McNeill from amongst the masses, even taking him out of the stadium to do so.

He must have been shattered from the game’s exertions, drained by the extreme heat of the day, and then having to climb the stairs to his destiny.

Billy McNeill’s life, like that of Celtic and the Lisbon Lions, echoed that elevated moment in Estadio Nacional.

All three would have their achievements forged from a history of adversity.

The establishment of a football club in 1888 aimed to fund the soup kitchens of Glasgow’s east end.

Those that would come to rely on such services were souls cast out from wider society, whether for their creed, nationality or simple economic misfortune.

Growing up in Bellshill, he was the product of a Lithuanian immigrant family.

Such people had fled persecution and poverty in their birthplace under first the Russian and then the Soviet empires.

And these refugees were not always welcomed in their new homeland.

It is not difficult to imagine that this feeling of having an impossible dream must have also existed in the Celtic team as the game went on in Lisbon.

One goal down after seven minutes, baking in the heat and humidity of Portugal’s capital, and playing an outstanding Inter team.

Yet all three found that time brought progress.

For Celtic this meant the once outsider club becoming a premier team in Scotland, regularly succeeding in league and final triumphs.

Billy McNeill secured a place and acceptance in his community, partly through his skills as a footballer.

For Celtic in Lisbon, salvation came in the form of a left-footed rocket from Tommy Gemmell.

And the stories – and successes – did not end there.

Celtic would not simply sit astride the competition in Scotland, but instead take their place as accepted partners amongst the European footballing elite.

Billy McNeill became not just a man who played football, but instead a central part and recognised leader of Scotland’s greatest ever team.

Back in Lisbon, Stevie Chalmers etched his own name into history with a late winner against Inter.

As the final whistle below in the 1967 European Cup Final, the fortunes of all three converged into one immortal and ecstatic moment.

But even that was not the end of the story, nor was the subsequent road always an easy one.

Instead it is a reminder that all things end and change.

Celtic remained amongst Europe’s cream for a period – reaching another final in 1970 – although would ultimately decline from that pinnacle.

The Lisbon Lions team would go on to complete nine-in-a-row league triumphs but they too would eventually see the sun set on their achievements.

Billy McNeill went on to managerial success, including his own famous league wins in 1979 and the 1988 centenary season.

But he also sadly later fell to much greater challenges than anything football has to offer when he was diagnosed with dementia.

Understanding the full stories of Celtic, the Lisbon Lions and Billy McNeill is long and complex, but all three are best encapsulated through the tale of McNeill holding up the European Cup.

Who knows how McNeill felt shortly before the creation of that prominent moment in time?

Perhaps he struggled to keep pushing himself on, possibly in the same way that many in the Celtic family – and more importantly the McNeill family – feel today.

But if so, they should remember that famous day in 1967.

They should think back to the final seconds before Celtic’s captain held aloft the trophy in Lisbon.

With the cup in both hands he stared out across the stadium, surely amazed at the scenes of adulation which lay below him.

He may have had time to give some thoughts to where he had come from, and where he was now standing.

He may have wondered about the future, hoping to build a happy life outside of football too, one that his personal reputation and family show was clearly achieved.

And he may have known that what would follow was sure to forever place him as a legend of Scottish football, recognised in death by friends and rivals alike.

Matthew Marr is a Celtic fan and blogger from Glasgow.