My Dads Generation Called Him Cesar. But To All Of Us He Will Always Be The Caesar. 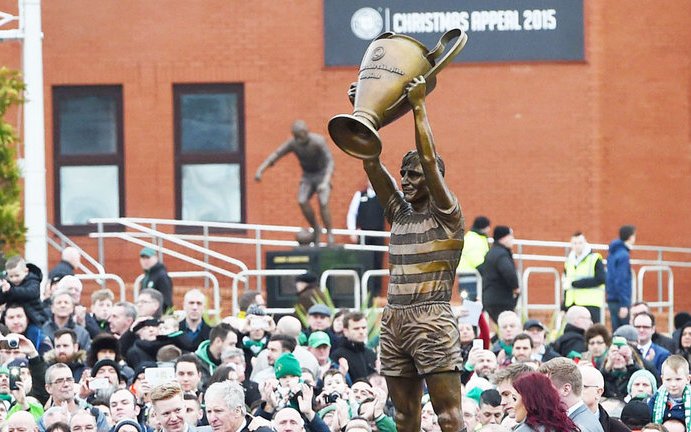 Our football club is a family, a special family. And a family is more than just the sum of its parts. It is a history. It has a background, an origin story, it has its own mythology.

Those who have lost people remember them in stories and anecdotes.

We hear tales of those who came before us, who we were never able to meet, and thus learn about where we come from.

Today this family is in mourning, but it is a mourning tempered with remembrance and something like awe. That’s an appropriate emotion when a true great has left the world and all around are contemplating his achievements and his impact, and the legacy he leaves behind.

Like any family, a football club evolves in generational steps. To the current generation of Celtic fans, some of those who came before are nothing more than names in a history book. Perhaps there is grainy video footage of some of them if we’re lucky.

Whilst we understand their contribution to our club as it evolved itself, it is often difficult to connect their achievements with the ones that we are enjoying today.

But the unbroken line is the proof of their greatness; nothing we take for granted would have been possible without them.

Yet there are others for whom that need never be said. Their contribution, their impact, their accomplishments, are so awesome that recounting them, in whatever detail, gives them form that in no way does justice to the sum total of their worth. You can look at their career stats and their medal haul and still never get it.

That is not immortality. There is something beyond trophies and titles, something that elevates a man to the pantheon of icons, which cannot be measured by statistics. Billy McNeill has been the walking embodiment of Celtic for more than 30 years.

Modern Celtic would not exist without him. It does not matter if you’re in your 60’s as my father is, in your 40’s as I am or in your 20’s where you have no memory of either the player or the manager. Even the saying of his name requires that you use a tone of respect. To think of him at all is to think of this club; the two cannot easily be separated.

My father could wax lyrical about what a footballer McNeill was. He often has. He remembers all of it, yet his appreciation of who Billy was and what he represents is no greater than mine nor that of the 20 year old for whom that footage is all there is.

I’ve watched his great games and the great moments within those games. I have gazed for what must be hours at the incredible, historical, photo of him standing in Lisbon with that trophy raised above his head, that glorious moment for which there is no equal. And I remember McNeill as the manager who led us to a centenary double in 1988.

My father has one appreciation of the man, and I have another. He saw the whole story unfold whilst I saw only half of it. Yet both of us felt the same sense of something special gone from the world this morning when we heard the news.

And our appreciation of his passing belongs too to those 20 somethings who never saw the player or raised a triumphant cheer for the manager. Their knowledge of the big man is limited to those moving pictures and their still equivalents, and the acres of commentary on his life and on his career. McNeill played no part in their warm memories of the club.

They get it just as we do.

They feel the same way we do.

They know that a titan has gone, but also that in the ways that ring down through the ages he never really will be because they look at the club we have today and they can connect it to Billy McNeill without the least difficulty in comprehension.

That is special. That is the greatest tribute to the man there is.

I spend much of my time in Fife – I’m there as I write this – and everywhere out here you are reminded of the impact and the legacy of Andrew Carnegie; his spirit infuses this place in a way that is inescapable. He died in 1919 – this is his centennial year – but his heritage is such that he’ll never be forgotten or his enormous contribution be allowed to fade. His statue is the centrepiece of Pittencrieff Park in Dunfermline, what locals call The Glen.

Billy McNeill’s statue sits outside Celtic Park, holding aloft the European Cup. The Lisbon Lions stand is named for the team he captained. The other statues, of Stein and Johnstone, formed part of that legendary era. Jock was the father figure, McNeill the firstborn son and heir. After Jock went it was Billy who most embodied the club and everything about it. He is as much a part of the place today as Carnegie is part of Dunfermline, where he was born and to whom he bequeathed so much.

What did Billy McNeill give to us?

Everything, friends. He gave everything to us.

My father’s generation called him Cesar; it was not an invocation of greatness then, although I’m sure every one of them meant it that way.

But he got his nickname from Cesar Romero, the actor.

The genesis of it is rather amusing; “In the original Ocean’s 11, the actor Cesar Romero drove the getaway car,” said Professor Richard Cogdell, when awarding Billy his honorary degree from Glasgow University. “Billy McNeill was one of the few members of the Celtic team (who) had a car.”

The generations to come will remember him as Caesar, the connotation different, the appellation more than earned. Because to us he was greatness personified, his life the stuff of legend and history. He was a leader. He was a conqueror. He was the master of all he surveyed.

But he had such humanity about him too. Those lucky enough to have been in his company were ever thrilled by his sheer presence, his charisma, but also his decency, kindness and love for all things Celtic.

All the Roman emperors were granted the title as a right, but in the beginning there was just one; Gaius Julius Caesar. His name, like that of McNeill, rings down through history, yet great though his achievements were it was his nephew, the first of the emperors, Gaius Octavian, made Caesar’s son by will, who best lived up to the name.

He not only avenged the murder of his great uncle, but won the civil war that followed, overtook his partners in the Second Triumvirate, rose to become First Citizen and created the imperial system and the Pax Romana – the Roman peace.

But like a list of Big Billy’s honours, a mere recitation of his achievements in no way does justice to the sum total of them and the way they changed the world.

Octavian, who by then was called Augustus, knew it himself. Lying on his death-bed, surrounded by his people, his final words were said to have been; “Have I played the part well? Then applaud as I exit. Behold, I found Rome of clay and leave her to you of marble.”

Look at the magnificent legacy he leaves behind him.

Look at what his life – all of it revolving around our club – did for the lives of every single one of us. He charted and changed the course of our history even as he made his own.

The man may have gone, but his immortality is assured.

Hail to the only one King Billy.

Now, and forever, hail to Caesar.