Sky’s Time Of Our Lives With The Lisbon Lions Was A Special Piece Of TV Today. 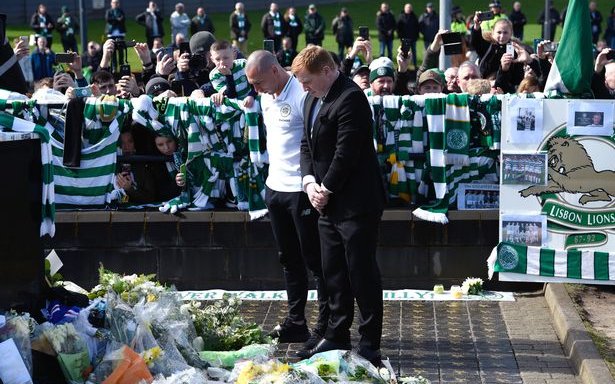 The Sky Sports special Time Of Our Lives show involving the Lisbon Lions is one the best bits of TV I’ve watched in a long time. I have no idea when this was made, but I am glad they decided to show it again in commemoration of Billy McNeill.

The man himself is at his best on the screen, articulate, witty, knowledgeable and filled with love for our club.

Bobby Lennox and Bertie Auld joined him to talk about not only that special day in Lisbon but their time as part of that fascinating, inspirational and historic period in our history. As ever, they were a pleasure to listen to, with Bertie highly entertaining with his stories and his off-cuff humour.

These were and are special men, part of a special time.

I give Sky Sports a lot of stick on this site, but a show like this, so well done, so respectful of that achievement and of those men, shows what they can do when they give the great moments in Scottish football the treatment they deserve. The decision to show this particular episode this weekend was a damned fine one. They have been excellent all week long.

Today was a poignant day, and they capped it off beautifully with this show.

The stories themselves, as told by the Lions, were excellent.

The one thing that shines through most, and it’s not the first time it has struck me, is the incredible confidence these players had in each other and their team-mates.

I make a big thing about the need for a manager who has an understanding of human psychology, and I’ve written about how Rodgers had studied neurolinguistics and how Ronny had qualifications in leadership … Jock didn’t have or need any of those new-fangled modern skills and yet every one of those players was infused with self-belief.

His greatness is almost impossible to quantify. When you look at what he achieved with this group of men, all born within a few miles of each other … it will never be done again, and especially in a modern era where teams shop in markets all over the world.

These players thought they could take on, and beat, anyone. And they did, time and time again.

They had such faith in themselves, and each other too.

The way they bonded into one single unit, I wonder if that stuff will ever be done again either.

It is common for players and clubs to go on tour pre-season nowadays, but they took it much further, and the manager knew that it would pay dividends. Our glory season came on the back of an epic American tour where the team came together and emerged as an all-conquering force that swept aside everything that came their way.

Well done to Sky for making such an excellent television program and for deciding to re-show it at the end of such a sad week. Seeing Billy on the television, at his best, waxing lyrical about the greatest period of his life, it really was quite something.