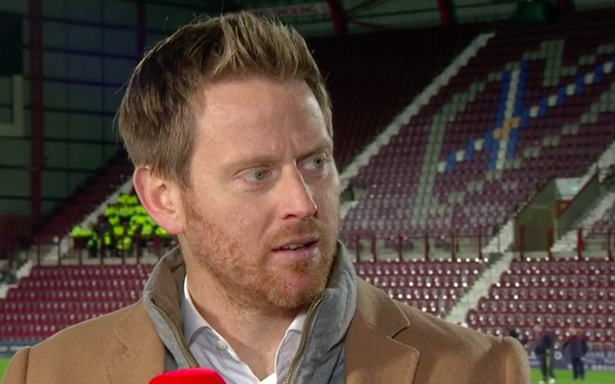 Michael Stewart has called out the Ibrox supporters today after they sang depraved songs mocking the Lisbon Lions.

He also demanded to know what the governing bodies intend to do about it. 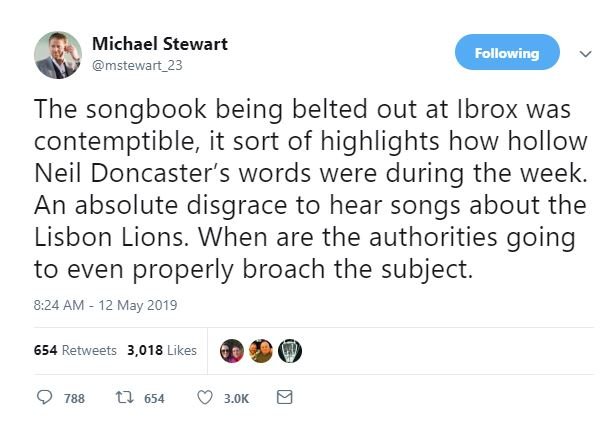 You all know the one I mean, and it wasn’t even the only one of their disgusting chants we heard today; in fact, this was a 90-minute bigot fest.

There are few journalists in the country who have been as consistent in calling out the chants from every club as Stewart.

Others are selective about it, or pretend that it’s not of huge concern both to football and society as a whole. His comments on the Ibrox crowd are rare in a media which prefers to ignore their more scandalous behaviour, and today was quite unreal.

From the moment they scored and they started the illegal Billy Boys, they never let up once. It was every bit as disgusting as you used to hear in the days of Rangers, but the chant about the Lisbon Lions and how they won’t see ten in a row is revolting even by their standards.

And it would have ended – or at least been partially curbed – a long time ago if the press gave the slightest damn about it, and called it out.

Frankly, it shames those who sing it and the club they claim to support. But the press – and the governing body – has been shockingly silent on it for too long. It took a statement from Celtic Park to even have it acknowledged.

For years the media has ranted about the Ian Durrant song being sung by fans and Pittodrie and every now and again they go off on one over wholly fictitious tales of songs about the Ibrox disaster being sung in the environs of Parkhead.

But this is thousands of people, every single week – and today it was tens of thousands of them; no “minority” this, it was nearly a full stadium – wishing death on a group of men who brought glory to the game here, and to our club in particular.

The Ibrox crowd is never more appalling then when it is revelling in victory.

Today, their version of a celebration was to indulge themselves to the fullest in hatred and bile. It was disgusting. Stewart alone has had the guts to call it that. So far.