Those Who Defaced The McNeill Posters Care About Nothing And They Speak For No-One. 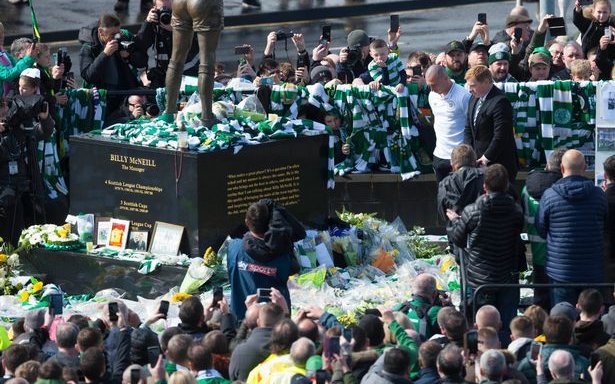 The people who defaced the Billy McNeill posters today; what exactly do they stand for?

What is it they think they stand for?

A political point of view? A football club? A “culture”? A people?

What cause did they strike a blow for?

What agenda did they advance?

It is easy to dismiss them as daft wee boys without a brain in their heads, but I read some of the forums and some of the bile towards Billy that was on them. I’ve written about it twice.

They were not speaking for anyone civilised, that’s for sure. All those people were too busy standing as the coffin went by, or sitting in the funeral hall, or waiting at Celtic Park for the arrival of the big man and those who were paying their respects.

They were not speaking for a club, because every club in the land paid the most fulsome tributes to McNeill and his sterling accomplishments in the game. I suspect they are Ibrox “fans” but if they are then their disgusting act flew in the face of their own board, their own icons, their own current players and coaches and tens of thousands of the club’s fans.

So what was the point?

To boast about it in the pub?

To snigger about it behind closed doors?

What does that make you except a low-life, a gutter rat, a scumbag?

And a particularly cowardly one at that.

If you think you’re striking a blow, then do it in a public fashion, with your own face front and centre and your own name known to all.

All you did today was disrespect the memory of a good man. You accomplished nothing except to unite all decent people in revulsion. You changed nothing except to bring the rest of us a little closer together, which I know for sure definitely wasn’t your aim.

Nobody applauds you. Nobody salutes you.

Everyone recognises you for exactly what you are; you care about nothing and you speak for no-one.

You and everyone like you, with all your minor positive traits fused into one, could not come close to the man the rest of Scotland lost.

That, perhaps, is why you hate him so much.

And the hate is all you’ve got, you sad pathetic creatures.