Neither Tierney Nor McGregor Must Be Sold No Matter The Size Of The Offers. 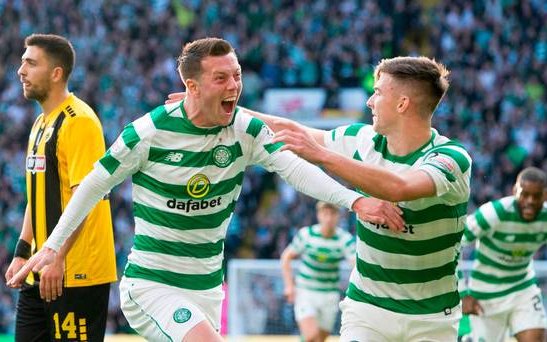 Every footballer has his price, right? Wrong.

The heart of this Celtic team is to be found in its Scottish players, those who have given everything and gotten us over the line with eight in a row and 3Treble. There is £30 million sitting in the bank. These guys are on long term deals.

This is the nine campaign. The next one is for ten. It is the absolute worst time to sell.

Look, I understand the “business case” for this, but like most other things the devil is in the details.

These guys can earn more in England, and even if we didn’t have a ludicrous salary cap which kept the CEO amongst the best remunerated people at the club we wouldn’t be able to pay EPL style wages to people. Those tens of millions are a lot of money too.

But the salary cap is why this is a deal breaker; it’s already being used as an excuse for why we have to limit our ambitions in the transfer market to “those we can afford”. I think we could, and should, pay better wages to attract good targets but since we won’t and since I know the vast majority of the cash we took from any deal would not go to the manager we’d be replacing the best footballers at the club with lower quality ones.

If you believed Lawwell when he said we’d emerge from this window stronger than we went into it then you’re a better person than I am. If he sanctions the sale of a top player – not Ntcham, we all expect that and there’s little argument against it – then the lowering of the club’s standards will be confirmed in spades, and he will have to answer for it.

Selling Tierney will not fly. Selling McGregor – and especially to Rodgers – might generate a bigger backlash even than that. Within the strict confines the club operates in, these players are irreplaceable and it’s just that simple.

All the money in the world won’t get us another McGregor, not at the level we’ve constrained ourselves into operating at.

Tierney will go on to prove what many of us already know, that he’s a better player than Andy Robertson who just won a Champions League medal.

Try replacing him with an SPL level wage cap.

Not matter what nonsense some inside the club would talk about it being “good business” the sale of one of those guys would be a dire footballing decision, and dramatically weaken us. Unless something changed dramatically at Celtic Park recently I thought football was what we did. If we punt one of those guys in this window we’re a for-profit with no concern whatsoever to what that policy inflicts on the team or on the manager.

It’s not going to wash.

When the offers come in we should be telling clubs that there is no fee that would inspire us to sell.

We should be telling them to look somewhere else.