An Unsung Hero: Celebrating The Life Of Bobby Evans. 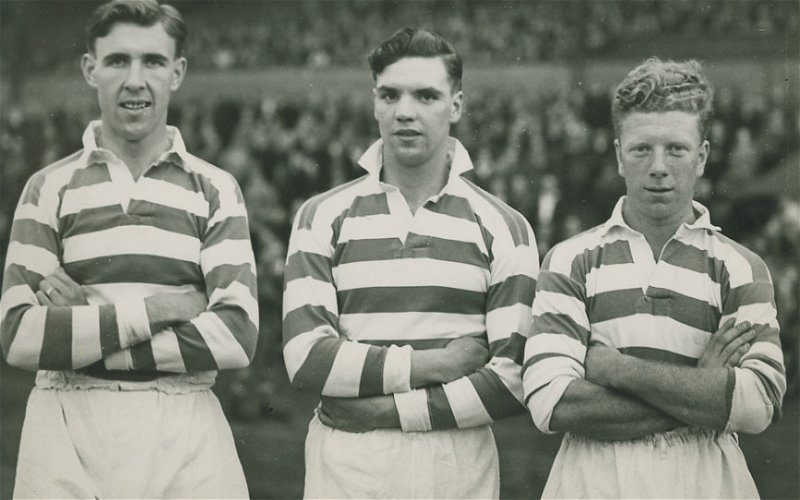 It may be hard to believe in the current climate of Scottish football where Celtic are celebrating a historic treble treble and eighth league title in a row but there was a period in the clubs history where it was possible for a player to represent the club for over 16 years and in over 500 games and only win five major honours.

This statistic however does not even come close to defining the legacy of Bobby Evans; a man who helped steer Celtic from near disaster to memorable glory.

Born on the 16th July 1927 in Glasgow Evans first came to the attention of Glasgow junior football side St. Anthonys whilst playing church football in 1944.

His progression was rapid and within six months he had been signed for Glasgow Celtic on July 23, 1944 just a week after his 17th birthday and after a number of positional changes settled for the club at right half.

As the country neared the end of the Second World War a full league program was not currently in place and nearly all away fixtures were closed to travelling fans.

In an interview that was originally recorded in the late 1980’s and released earlier this year by the Celtic Underground the former right half described the situation as less than ideal:

“They keep talking about it now when it comes to the attendances they are getting , but when you go way back to 1945 there was nothing, you couldn’t do anything, there was nowhere for people to go. Every away game other than Ibrox the gates were closed for the game. Ibrox held something like 120,000 at the time so that was the only away game that the gates weren’t closed”

A crowd of 10,000 passed through the turnstiles at Albion Rovers’ Cliftonhill stadium to witness the debut of the teenage Evans in a game won 1-0 thanks to a penalty converted by the legendary Jimmy Delaney.

By the time the war ended in 1945 and a full league set up was restored in time for the 1946-47 season Evans was a well-established member of the team however it was about this team that the team’s fortunes took a decided turn for the worse.

Delany was sold in 1946 to Manchester United and an adequate replacement wasn’t sought until Jock Weir arrived from Blackburn Rovers in February 1948, even so the Bhoys only avoided relegation on the final day of the season thanks to a Weir hat-trick against Dundee and the club’s top scorer Tommy McDonald only managed a paltry return of seven goals across the year.

The board, recognising that this trend couldn’t continue, overhauled the squad during the close season and a number of players were allowed to leave but the biggest factor in a return to success would the signing of fellow Celtic legend Charlie Tully from Belfast Celtic for £8,000 in June 1948.

Results steadily improved and the club would never be threatened with relegation again however it would be until 1951 that Evans finally had his hands on some silverware.

Under the leadership of the the iconic Jimmy McGrory a side made up of such names as Sean Fallon, Jock Weir, Bertie Peacock and Tully marched past East Fife, Duns, Hearts, Aberdeen and Raith Rovers to set up a meeting with Motherwell at Hampden in front of 130, 000 fans.

A goal from John McPhail was enough to separate the two teams and deliver Celtic’s 16th major trophy and their firs since the league title in 1938; in the space of three years the club had gone from near disaster to success and the emotions of the players reflected this turnaround. Fallon, who had only signed for the Bhoys earlier that year, echoed the emotions of many of the players:

“”As I walked off at Hampden Park I felt I had got everything out of like I had ever wanted. I had become a member of the famous Celtic FC and holder of a Scottish Cup badge all in one year.”

Celtic have always had a knack for winning one off trophies and by the time the 1953-54 season came around Evans had already won the Victory-in-Europe Cup in 1945, the St Mungo Cup in 1951 and then the Coronation Cup in 1953 although Evans’ greatest success was yet to come.

Repeating their previous heroics in 1954 the club this time dispatched Aberdeen 2-1 to once again raise the national cup but even greater success was to be had in the league as they romped home five points clear of Hearts to clinch Celtic’s first league and cup double in 40 years.

Further Glory was to come when he became the first club captain to lift the Scottish League Cup following a replay victory over Partick Thistle and the following year a thumping 7-1 victory over Glasgow rivals Rangers ensured Celtic retained the trophy, a result that remains the biggest winning margin in a British cup final.

At the end of the 1959-60 season when re-contracting time came round Bobby asked to be put on the transfer list. The directors were less than keen to lose one of their most consistent performers for the past decade and a half however they reluctantly agreed to his request.

He was quoted in the Evening Times as saying:-

“The Celtic policy is the wise one of bringing more and more youth into the team and with young Billy McNeill coming along so well it gives me the chance to make a move.”

Bobby Evans eventually left Celtic in 1960 after 537 appearance for the club when Chelsea met the clubs valuation of £12,500. Spells with Newport County, Morton, Third Lanark and Raith Rovers followed before eventual retirement.

During his career he also won 48 caps for Scotland, including captaining the side in a 3-1 victory over England in 1949, a record for a Celtic player for many years. Bobby sadly passed away in 2001 Evans after contracting pneumonia in 2001 and was inducted into the Scottish Football hall of fame

Although he will never be one of the most recognisable names in Celtic history his star shines as brightly as any other due to his length of service and dedication; Bobby Evans will shall always remembered as a legend for both club and country.

Rob McCarry is a sports writer, father and raconteur. Contributor to @yfst and @TheFootballPink