Another Media Embarrassment As Rod Stewart Sets Them Straight On Celtic Ranking. 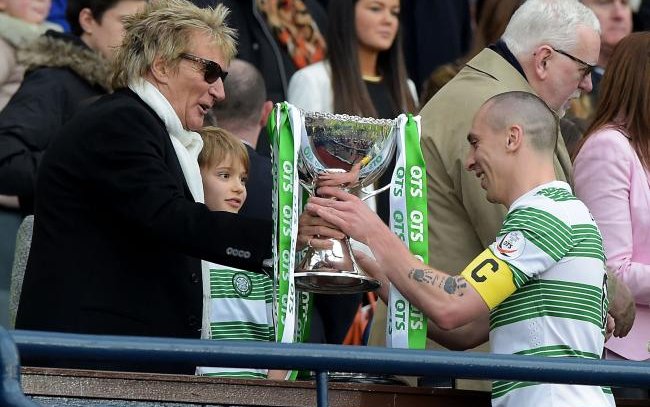 As regular readers are well aware, I reckon that if you want to see Real Stupid you look at the Daily Record Hotline for some sterling examples.

As those who read yesterday will be aware, I took a minor shot at the media over their one-day obsession with a statistical list called the Global Club Soccer Ranking, which I’d never heard of and never expected to hear of, or write about, again.

Yet here we are, and I’ve got to do something else I’ve never done before either.

What a weird moment this is for me, to praise a Record Hotline caller whilst at the same time revisiting the thing I didn’t think I’d have to.

This is a bizarre one though.

Because one of the sensible people called The Record Hotline last night, and not just a regular person but no less a person than Rod Stewart himself.

And the subject matter was the Global Club Soccer Rankings.

He wanted to set them straight on something.

“The guy who wrote it said that (they) were far ahead of Celtic. But when I looked up the chart this morning it was the other way around,” he said. “It starts off with the likes of Manchester City and Barcelona and then all the way down it’s got Celtic and (them). But, in actual fact, Celtic are above (them.) Now, how they work out this chart I don’t know. It’s all bulls***. But I just thought there was a little error there that I would like to correct on behalf of Celtic!”

I agree with his summation on the chart and everything about the story, but I am amused nonetheless by the way the media leaped onto it yesterday and have today suffered a complete reversal. It was, and is, a complete non-issue … but it’s another instructive one in that they made it into a news story and, if they believe that it was, will now have to correct it.

The Record tried to with this gem of an explanation.

“Turns out both Rod and the Record on-line team were actually correct. At the time of publication – on Monday afternoon – Rangers did top their old rivals in the latest Global Club Soccer Rankings, released ahead of the new domestic campaign. But those positions flipped overnight – leaving Rod as mystified as us as the countdown to the new season ….”

That is up there, frankly, with Chris Jack’s illuminating dummy spit, which I just highlighted in another article.

Still, at least the matter has been “clarified.”

I now look forward to the articles about how Celtic are, in fact, ahead of the Ibrox club from all the other outlets which thought this was worth writing about yesterday.

Will we get them?

I very much doubt it, but then neither myself nor any of you nor any of the hacks cared about this thing a day ago and none of us will care about it tomorrow either.

The only time it was of interest to anybody was when the Ibrox club was above us on it … and they aren’t anymore.