Celtic After The War: Celebrating The Life Of Charlie Tully 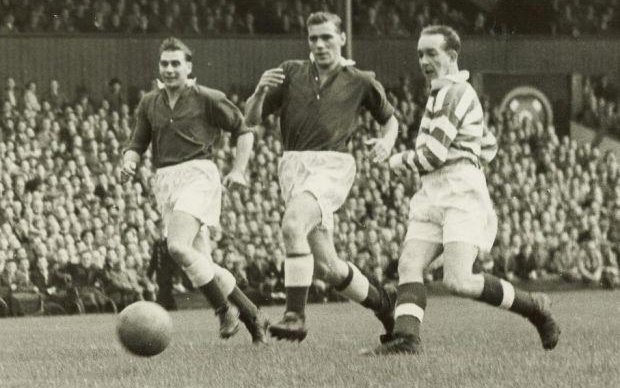 Following the celebrations of VE Day in May 1945 affairs in Britain quickly returned to a semblance of normality and the Scottish Football Association had sufficiently regrouped in time for league football to return to Scotland for the start of the 1946-47 season.

Glasgow Rangers, who had won the last title before the official program was suspended, returned to winning ways almost immediately by winning the league championship that year by two points from Hibernian in addition to claiming the League cup, defeating Aberdeen 4-0 in the final, whilst the Dons collected the Scottish cup at Hampden in April in front of over 82,000 fans.

However not all teams was as successful after the resumption of the league program with Glasgow Celtic, who had been runners-up in 1939, finishing a disappointing 7th with only 13 league victories from a possible 30.

Although this season would ultimately be seen as a disappointment in the history of the Hoops the following year would see things get much worse.

Only a goal in the 88th minute of the final fixture was enough to see the Bhoys avoid relegation to the second tier.

Weir had arrived as a big money signing in February 1948 although despite his hat-trick in the final game had not had the impact many at the club had hoped when enticing him north from Blackburn Rovers for £7,000.

Meanwhile across the city Rangers had finished in the top two in the league again and had smashed Scottish footballs attendance record when 143,750 crammed into Hampden to see them sweep past eventual league winners Hibs in the national cup semi-final before defeating Greenock Morton in a replay to lift the cup.

The board at Celtic Park had by this point realised things had to change and in the summer of 1948. Joe Rae, George Hazlett, Rab Quinn, Jim McLaughlin and Bernie Cannon were all released along with Tommy McDonald and Frank Walsh; the latter two having only arrived at the club the previous year.
The biggest change however would be made by a player joining the club…

Born on the 11th of July 1924 at 74 McDonnell Street in the Pound Loney area of Belfast, Charles Patrick Tully was one of thirteen children and grew. Educated at St Kevin’s School, he grew up playing hurling and Gaelic football, skippering the school team.

Despite his ability in the Irish codes, he loved soccer and was regularly in trouble at school for playing the game regarded as ‘foreign’ by his schoolmasters.

By 1944 he was struggling to break into a very strong Belfast Celtic team and was allowed Charlie to go on loan Ballyclare Comrades and Cliftonville in north Belfast before he established himself firmly in the first team in the mid-1940’s, with his crowning achievement coming in April 1947 winning the Irish Cup and scoring the winning goal against Glentoran at Windsor Park.

His obvious skill brought him to the attention of Celtic Chairman Robert Kelly who swooped for Charlie on the 20th June 1948, paying Belfast Celtic £8,000 for his services, and he made his debut a few weeks later in a 0-0 draw against Morton.

It didn’t take long for his class to shine through and his fame was assured when he took on Rangers’ famed and feared Iron Curtain defence and tore it to shreds in an epic 3-1 victory at Celtic Park. There are people who still swear that they saw Charlie Tully sit on the ball during that particular Old Firm match with newspapers of the time reporting ‘Tully dribbled about almost at will…The miraculous Irishman bewildered, badgered…. mesmerised Rangers’

It wasn’t long before the young man from Belfast was catapulted Tully to the status of cult hero and the beginning of ‘Tully Mania’ when Tully cocktails were sold in pubs; Tully ties in shops and green Tully ice cream in cafes.

A favourite story of many concerns a Scottish cup tie at Brockville in February 1953, two goals down at half time the hoops were facing a tall order to get back into the game. A superb solo effort by Willie Fernie reduced the deficit to one goal before Celtic were awarded a corner kick, took a corner for Celtic and swung the ball directly into the net.

The referee, presuming that the ball must have been placed out with the arc, instructed Tully to retake the corner. Tully then recalls the following interaction:

To which Willie just grinned and said “You’ll be lucky if you keep it in the park!”

Despite his misgivings he once again struck the ball perfectly and achieved the same result, swinging the ball into the net directly from the corner before Johnny McGrory cannonballed home the winning goal to seal the tie and The Bhoys went on to complete a league and cup double that year, defeating Aberdeen 2-1 in the final.

Winning a total of one league title, two Scottish Cups and two league cups, including being a key member of the side which destroyed Rangers 7-1 in the final of 1957 before leaving the club in 1959. Thereafter he took up the position of player-manager at Cork Hibernians before spells in management with Bangor (twice) and Portadown overall Charlie played 319 times for Celtic and scored 43 goals.

His sons Charlie and Brian and daughter Patricia all still live in Belfast, Northern Ireland.

Many players have won more than Tully ever did as a Celt but very few will have ever claimed the hearts of the Celtic support the way the Belfast Bhoy did.

Rob McCarry is a sports writer, father and raconteur. Contributor to @yfst and @TheFootballPink