Celtic Fans Recognise Trump’s Latest Bigotry. We Were Told To “Go Home” Too. 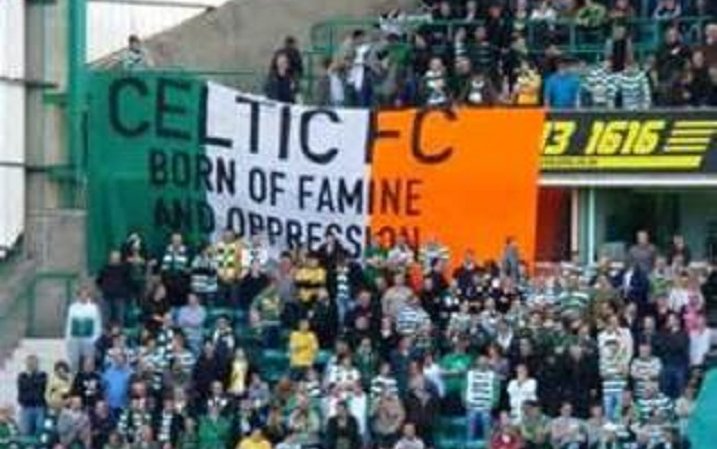 Celtic fans are world authorities on what bigotry looks like.

If you’ve seen it up close, close enough to smell body odour and bad breath, if you’ve heard it expressed right in your ear, if you’ve lived next door to it, if you’ve worked alongside, if it has stood next to you in a pub or sat near you on a bus or train, you know it the second it appears.

You can spot it a mile away.

And I can say without a shadow of a doubt that the President of the United States is a bigot, and not just any old bog-standard bigot.

He ticks so many boxes, he is an equal opportunity hater, despising people all across the non-white spectrum.

He feels no sense of shame about his lifetime of expressing hateful ideas; they are part of why he was elected, after all.

This week, he is embroiled in a fresh controversy. He usually is, but this one feels different. This one is so raw, so out there, so perfectly capturing the essence of who he is, but also what bigotry itself looks like, that the condemnation has been nearly universal.

I say “nearly” quite deliberately.

The Tory leadership front-runner has been oddly silent at the time of writing this, but that does not surprise those of us who might call Boris Johnson – the man who wrote of “flag-waving piccaninnies” with their “watermelon smiles” – a racist too.

Trump’s latest scandal erupted when he told several Democratic members of Congress to “go back and help fix the totally broken and crime infested places” they came from.

The targets of this hateful rant were Alexandria Ocasio-Cortez, Ayanna Pressley, Rashida Tlaib and Ilhan Omar. The latter was born in Somalia, and is as great an example of the American spirit as you are ever likely to find. The three others were born in the United States itself.

Not that this matters; those comments are disgraceful. Aside from anything else, all four are elected representatives and deserved a modicum of respect, and not the kind of bile that could have been shouted across a bar by ignorant tattooed yobs on a night out.

I hate this kind of stuff, and part of that comes from recognising it all too clearly.

It was – and still is – a sentiment you can hear sung at football matches in this country.

Oh, it may not get the full lusty renditions it once did but I’ve heard it recently.

Once it was a full-volume party song at Ibrox, exhorting the Irish in Scotland that “the famine is over, why don’t you go home?”

One of the beautiful things about the response to Trump is how the US media is furiously calling it out and the condemnation is raining down from across the political spectrum, not just there but across the globe. Even the UK Prime Minister Theresa May called the comments “completely unacceptable” but when such sentiments were being blasted out every week by the Ibrox fan base at first there was not a word in the Scottish press about it.

But all that changed when Celtic fans raised the issue with Irish Consulate, who raised it with The Scottish Government.

It ended up condemned in both the European and Westminster parliaments as well.

Overnight, an issue that the media here had hoped would go away spiralled into a full-on public debate, aided and abetted by then Celtic chairman John Reid, who brought to bear the full weight of his political experience and his contacts to condemn it in the strongest terms imaginable and leave Scottish society no choice but to confront it.

Branding the song “racist and deeply offensive”, he went on to add that it was a clear violation of the Race Relations Act.

Police eventually agreed, and made it clear that singing it was an arrestable offence, which they followed through on.

Lord Carloway, presiding over the trial of someone charged with singing it said “The song calls upon persons of Irish descent, who are living in Scotland, to go back to the land of their ancestors, namely Ireland … (it is) racist in calling upon people native to Scotland to leave the country because of their racial origins.”

Yet it took three months after Reid’s comments for the game’s governing bodies to raise the issue, when Lex Gould made a statement which cleared the song of being sectarian but admitted that it was racist.

Then, in warning the Ibrox fans not to sing it, he made it clear that everything was on the table if it continued, even a points deduction.

The Ibrox club never explicitly condemned the song, no matter what they might try to argue now.

“It is the club’s view that the interest of our supporters and the club will be best served by supporters refraining from singing The Famine Song,” is as far as they were willing to go in condemning it, and the Rangers Supporters Trust actually defended it as banter.

Worse still was this disgusting article from current Ibrox PR pit-bull Jim Traynor, which amounted to a full-throated defence of the song itself and those who sung it.

He actually ends that article with his own disgusting variation on the theme. 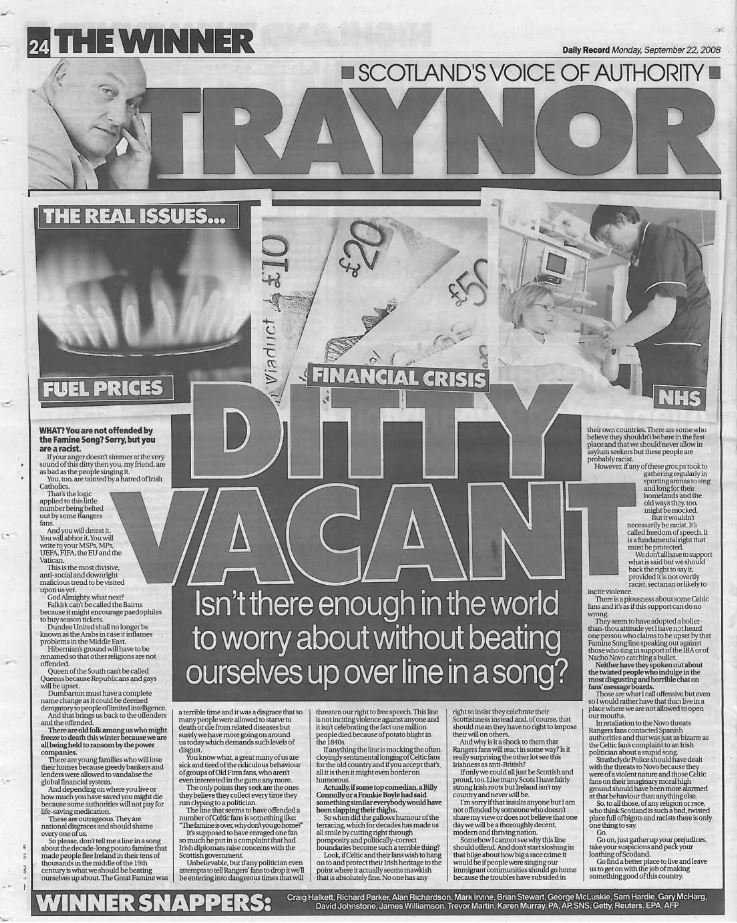 Anyone who thinks this problem has gone away just because it’s not being belted out every week at their ground is kidding themselves on.

We recognise this stuff so readily because we still hear it and see it; this was, after all, the month when thousands of pissed up Orangemen marched on the streets to remind us that their culture still holds the flag and the crown.

In recent years, a certain song has often been heard being shamelessly belted out.

And they believe themselves to be “discriminated” against.