A Well Known “Blog” Has Today Smeared The Green Brigade With An Atrocious Lie. 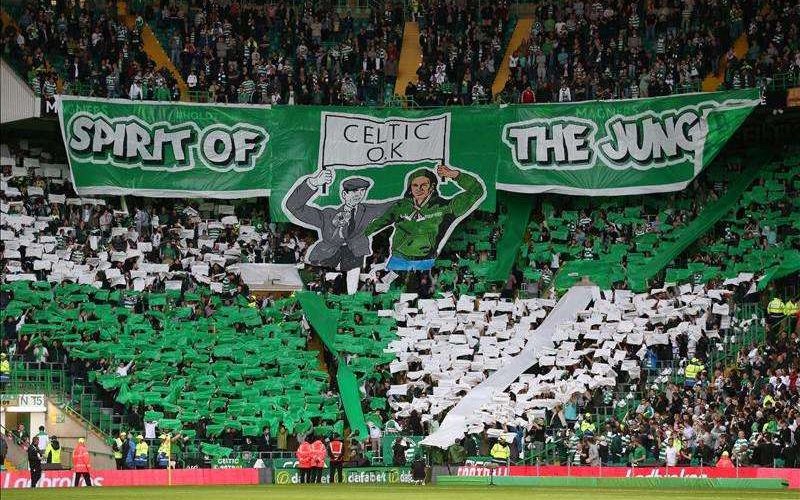 This website does not normally comment on the content of other sites – except when we’re laughing at the nutcase fringe over at Ibrox Noise or elsewhere. I don’t believe it is our business what other people put on their pages, except when that content attacks our club and our support.

Today, and for the second time this year, the anonymous blogger who calls himself Johnjames has provoked me to respond to something he’s written.

I know I shouldn’t, because this is more publicity than he deserves … but people ought to wake up to this guy and whatever his agenda is.

Today he has alleged that a Celtic fan group – he specifically mentions The Green Brigade – sings songs mocking the death of Lee Rigby.

This is a barefaced lie, an atrocious, malicious untruth that cannot – that must not – go uncommented on.

As the author of this piece knows full well, such trash only gives succour to those who want to paint the entire Celtic support as malignant and evil.

I’m not interested in what possible motivation he has for spreading such arrant nonsense any more than I care why he continues to stoke conspiracy theories about the McCann’s and other such tripe.

The Lee Rigby song lie has been promoted elsewhere, of course, but never on a site which purports to cater to Celtic fans.

And this geezer actually has the cheek to ask for money from his readers for writing stuff The Daily Record no longer even bothers with.

That song has never been heard at Celtic Park, and but for a few morons who once chanted it in a boozer and filmed it for posterity, I have never heard it sung at any away ground either, in spite of what this article alleges to the contrary.

To suggest otherwise is outrageous and untrue.

I cannot say this enough.

I cannot condemn enough anyone who would spread such a despicable falsehood, and I cannot express my contempt enough for someone who does it under a pseudonym and still ascribes the “information” to a third party.

It is desperate, deplorable stuff, scraping the bottom of the internet barrel.

This guy is not a reputable blogger; he specialises in ad hominem attacks on other Celtic sites and writers, preening and posturing as though he has some special knowledge.

If he did he would not have gone on the record with an article that levelled some pretty spectacular allegations about Neil Lennon whilst stating that he hadn’t got the job.

He wouldn’t have written that both Tierney and McGregor had agreed deals to sign for Leicester.

That’s what his “credibility” is worth.

This story today – and the shameful untruth at its centre – ought to be the final nail in its coffin.