Celtic Fans Must Be Vigilant. Our Enemies Are Watching Us. 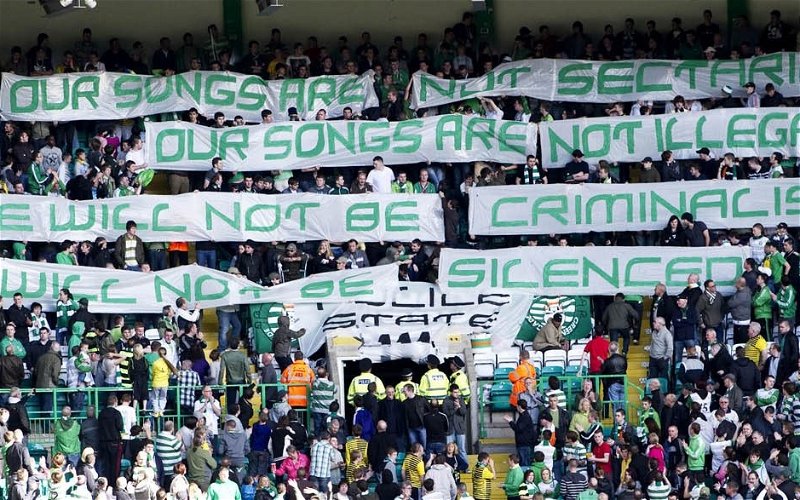 With the news yesterday that the Ibrox club has once again found itself in the crosshairs of UEFA, it is ever more imperative that Celtic supporters maintain their own high standards and protect the good name, and reputation, of the club we all hold dear.

The UEFA investigation have put the spotlight on Ibrox, but we know that behind the scenes there are busy little Peepul, folk with way too much hate in their hearts and time on their hands, writing letters and stirring the soup.

We know there are people in the media determined to push the “two heads of the same coin” narrative.

We know that there are folk at the SFA who would do anything not to tackle this and who know the best way to ensure they never have to is to rope other clubs – our club – into the shame with the guilty one.

As the great Talking Heads once said; “same as it ever was.”

But our rivals are in need of deflection more than ever, because of the perilous path they are now on. They could have their ground closed for what took place in Warsaw.

Indeed, they will be very lucky indeed to avoid that fate.

Beyond that, UEFA can ban them from Europe for a year or longer, and if that happens they might as well pull down the shutters over there and have done with it.

Our support does have a selection of mugs in it, that’s not even up for debate. The guy who threw something on to the park at the weekend was a case in point.

That he was so swiftly pointed out is a testament to how protective Celtic fans are now about our reputation. We have to remain on our guard.

The nonsense has already started, of course, as I said yesterday in the Steve Clarke piece.

I don’t know if Clarke was just trying to stay in the middle of the road or if some “helpful” SFA press officer put that stupid notion of a “two way street” in his head, but it’s a nonsense as we’ve pointed out on this site over and over again.

Celtic does not have a sectarianism problem, it’s as simple as that. If we did this site would write about it and so would all the others. We don’t want that kind of garbage in our stands, at our club, in our lives. Too many of us have lived on the end of it for years to tolerate its creep into Celtic Park. I would have the word “orange” removed from the vocabulary of our supporters right now, as it’s all too easily misrepresented by our enemies, but that’s about it … that and that old dirge about Roamin in the Gloamin, a song I haven’t heard for years anyway.

Overall though, I am comfortable saying that as a support we are different from the one across the city. We pride ourselves on inclusivity; we didn’t need a ludicrous PR campaign to urge us to open our arms and make minorities feel welcome.

We were the minority once.

Our club was founded for that very reason.

Our entire history has been one of embracing the world around us, instead of pushing it away and building our own wee insular empire.

It infuriates me that a scandal at Ibrox once again has put eyes on our own club.

One day we’ll be able to decisively leave this perverse idea, this shameful alleged “connection” behind, but right now it is incumbent upon us to put our very best foot forward.