Celtic Is On The Brink Of Unleashing A Huge Talent On The Scottish Game. 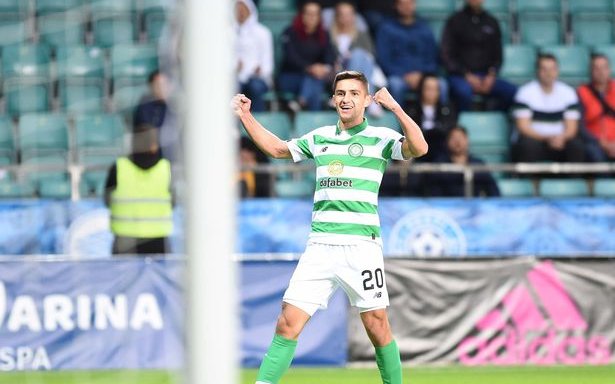 One of the curiosities of Brendan Rodgers’ last few months at the club was the casual way in which he dismissed one of the most important signings of the last transfer window.

Sitting a press conference with the January business still ongoing, he dismissed the club’s pursuit of Marian Shved which set warning lights flashing and threatened to send the rumour mill into overdrive.

It was such an obvious piece of confected criticism.

“We have enough wingers,” he said, dismissively, having already tried to sign several players for that position.

If it seems obvious now that this was a manager shamelessly working his ticket, the real wonder is that it wasn’t more obvious at the time.

Because it was clear that Shved had real talent.

Shved went back on loan to the club which had agreed to sell him to us, and he continued there to do what had caused us to buy him in the first place; he set up and scored goals. Those who keep track of our loanees brought back rave reviews.

And yet we’re only just now seeing him for ourselves.

To say that having him this year is like having a new signing is accurate, except that we know what we’re getting.

And just the other night, he arrived on the scene with a bang.

Listen, it is one of the peculiar and hilarious traits of the Ibrox fan-base that they can get carried away over very little, and so any speculation about what Shved can bring to Celtic has to be based on more than just a single goal in his debut game against a team that was already well beaten.

But this boy was doing it in Russia last season and the signs are good.

I think we have a major talent here, the sort who can take the game in this country by storm. Not only can he play wide right, but Lennon has tried him in the number 10 slot pre-season, and he has the ability to function in either role.

He is a creator. He has two good feet. He is pacey. He knows how to find the net.

When you look at the signings other clubs have made in this window, at the business they have done, you look for a game-changer. This guy would have massively enhanced every other team in the league, and been a genuine threat wherever he wound up.

Look at the players who have been brought in across the city; this is the alleged “challenge.” They have released Candelas, who was a decent footballer, and replaced him, in effect, with the likes of Jordan Jones and Hastie. They have Jamie Murphy in reserve, but he’s not played in a year and already has an injury. These guys are all inferior players to the one we bought last season and are only now seeing make an appearance in the side.

Shved improves us in an area where it matters, and there is very little doubt about that. The player enhances a squad that was already very strong. If he lives up to his huge potential, he could be the star of this season’s SPL.