Some In The Media Are Determined To Find Celtic Guilty Of Something Last Night. 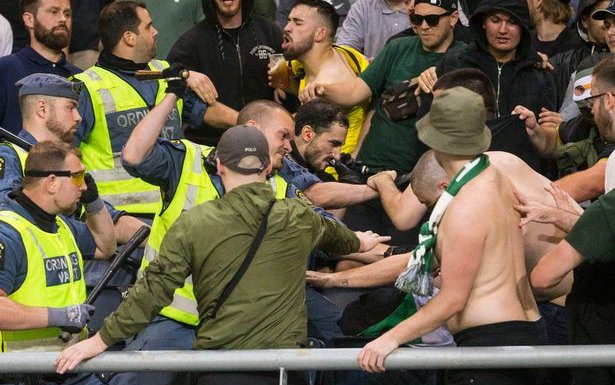 I am keeping my powder dry on the issue of the Celtic fans and the events in Stockholm last night, because that’s what you are supposed to do until the facts are in.

Celtic supporters were involved in ugly scenes inside the stadium; that’s a known fact.

I’ve watched the video footage of police wading in with batons against people who appear to be doing nothing wrong … European police have a long, dismal record of being too handy with the hardware, too ready to lash out with no provocation.

Some of the hacks and some of the papers want to just assume the worst about our fans; that is not news.

Celtic has said that a core of Hammarby fans were inside the Celtic end.

Celtic would have spoken to our own fans and will have information from “the ground”, but the situation is confused.

This has not stopped The Evening Times and other newspapers from doing their usual nonsense.

The Times described it as a “dark night” for Celtic before they knew a single thing about what had happened.

The Daily Record says today that Hammersby have denied that their fans were involved; you have to read the article to learn that it was a Hammarby fan group, not the club, they spoke to and far from denying that their fans were involved he actually said this; “It is possible there were Hammarby supporters there, but it wasn’t organised by us. If that’s the case, it would be about ultras or individuals.”

So not exactly a cast-iron denial, and the only reason The Record ran that headline was to try and cast some doubt on the Celtic statement from last night.

I am going to wait on this one.

The media will try to whip up hysteria and run nonsense – it looks as if their story about the Ibrox club facing a third UEFA investigation was exactly that, and based on a single tweet from an Ibrox fan rep who says Stewart Robertson told him – as they always do … but inquiries continue where people only want the truth.

Let me tell you, if Celtic fans did something wrong here the club will not sweep it under the carpet.

They will want to confront that, because to do otherwise allows problems to fester as they have done at Ibrox, and that has bigger consequences down the line.

Celtic can be trusted to get to the bottom of this.

They are pursuing reports that Hammarby fans were in the Celtic end and were insistent on provoking trouble with the home supporters and police.

Skirmishes were captured on mobile phones.

I think, based on reports I’ve heard from people who were there, that our fans were well behaved, but I am not going to rush to judgement on that until the club has finished looking into it.

You should ignore everything you hear until then, and especially from our disgraceful media who, all too predictably, want to drag us into the Ibrox club’s growing morass. Look at the instant verdicts on Twitter and elsewhere last night; they couldn’t wait.