The Green Brigade’s Messages To The Board Had Better Be Getting Through. 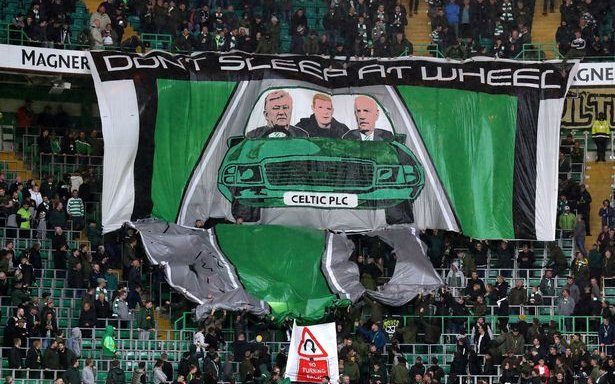 We’re in the endgame now … seven days left and counting.

The transfer window is almost closed, and if you’re feeling underwhelmed you aren’t alone. Really, it is a scandal that we sent any manager into the big games we did without the proper level of support, but Lennon is not Rodgers and we needed to go above and beyond when it came to him.

No matter how much we want to back the team and to back the manager right now, we cannot, and many of us will not, simply ignore the colossal mistakes made by this board of directors. We have legitimate questions, and neither myself nor others are near being done exploring these issues.

Lawwell’s jacket is now a shaky peg. If the manager fails then he Lawwell will own that failure with him, both as the man who appointed him and the man who has withheld resources from him. There will be no excuses. He will have nowhere to hide.

He has seven days to put at least some of this right, although it is way too late for the Champions League.

The most vocal section the support has already had its say, not in songs but in banners. Two of them have been aimed at Lawwell and the board, and the message is clear in both. The Green Brigade has voiced the opinions of many, that this man has led us to severe downsizing.

The club risks, as the second banner says, being asleep at the wheel.

We may be facing an actual challenge this season. How serious is Lawwell about putting us in the best possible position to best that challenge? This man has been shockingly complacent these last few years; surely now he sees the writing on the wall?

Lawwell and this board have cost us two Champions League qualifications in a row with their dithering and failures to strengthen this club. For all the talk of “fiscal prudence” they’ve gambled with huge sums of money and neither risk has paid off.

The failure to conduct a proper search for the manager is damning.

The total absence of a real scouting network has us shopping in the SPL again; don’t get me wrong, there’s nothing wrong with that if the players are right and it has served us well on the historical timeline … but it speaks to a real absence of proper talent spotting.

The Green Brigade have sent the message, but it is not only their message but one that expresses the views of much of the support. Those in the boardroom had better be paying attention. If this starts to unravel they will have more than just our singing section on their backs.