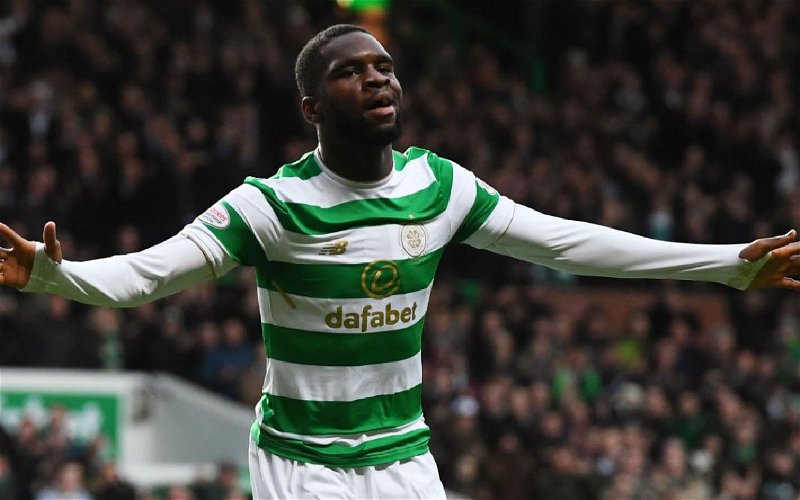 Fresh from Ibrox, and the first real acknowledgement from many that he is Scotland’s best footballer, Odsonne Edouard played two matches for the French Under 21 team. He scored in both. Last night he grabbed a double.

This is the steady rise of a phenomenally talented footballer.

We are watching a legend emerge, and we’re lucky to have him.

According to some in our media there is a “debate” raging as to whether he really is the best striker in the country.

There may be a handful of idiots holding out on this, but they are a joke and most people see them that way.

Frankly, anyone still clinging to the view that Morelos is a superior footballer isn’t playing with a full deck.

There’s a lot of looking at this through the blue tinted glasses, but even they can’t disguise how vastly superior our player is to the whingeing Ibrox forward.

If there isn’t interest – real interest – in Edouard already there will be.

Top clubs will be sniffing around him and the big money offers will start to come in. At Ibrox they’ve been “anticipating” one of those offers for Morelos for two years … it’s never come and it isn’t going to. He crumbles under pressure. He explodes when provoked.

He is a limited talent on top of that.

People keep on talking about how he is still young and will improve; this is an excuse they are forever making for players over there. Dembele is 23, the same age as Morelos, and he’s already got his big move. Edouard is 21, and is already looks like he’s going to be better than his French counterpart.

Morelos is miles behind both of them, and I think Griffiths is a better player than him too.

You could debate that all day and night, if you were of a mind, but what is surely beyond dispute is that French Eddie has far more quality.

You will still hear the question being raised in some quarters of the media.

They aren’t delusional; or I don’t think they are. I really don’t think anyone sane believes Morelos is as good a football as Eddie.

But they have a party line to toe and they will stick to it.

They are nothing more than stenographers and PR men.

The Ibrox club has to keep alive this fantasy of getting big money for the Colombian, and so the comparisons will continue, with the rationale that if people are watching Edouard and Morelos is being talked about as at least his equal that the Ibrox club will get similar offers.

But the key word here is “watching.” It is going to take more than just hype to attract even minor interest. Any club which is going to spend money will want to take a look at the footballer they are meant to be buying … and this is where the interest dries up.

Coming to watch Edouard is a different story though, because he oozes class. Over the next few months a lot of people are going to be sent to take a look at him … and the reports they send back home will be glowing. There is no avoiding it.

Eddie is happy at Celtic; that’s where we have an advantage.

The big money move will be there for him at some point; until then there are trophies and titles … and next season a place in history.